The humanitarian disasters which lead to mass movements of refugees can bring huge pressure on the environment of the host country. For the past 20 years, camps in eastern Ethiopia have housed thousands of refugees who fled the conflict in Somalia, with a peak population of over 600,000 people in the early 1990s.

The UNHCR and its partner NGOs provide building materials, food, water and basic non-food items, as well as welfare and education services, in the refugee camps. What has not been provided until recently is cooking fuel. Refugee women are therefore forced to go out of the camps, several times per week, to gather firewood for cooking. Such trips can last up to eight hours: not only are they exhausting, they put women in great danger, with many reports of harassment, rape and other violence. The previously well-wooded area round Kebribeyah refugee camp is now virtually bare, as a result of the long-term pressure on wood supply from so many people.

The Government of Ethiopia knew that unwanted molasses (a by-product of the sugar cane industry) was causing pollution through being dumped in rivers. At one sugar mill this pollution problem had been solved by constructing a plant to convert molasses to ethanol, but markets for the ethanol were limited. The Government recognised the potential for using this ethanol as a clean fuel for cooking, and in 2003 put out a tender for a pilot study of ethanol stoves. The CleanCook stove was the model selected.

The CleanCook stove is modelled on the Origo stove, which was invented in 1979 by Bengt Ebbeson and developed for the European and North American leisure market. The Origo has become one of the most popular stoves for use in boats and camping, and is now manufactured by Swedish company Dometic.

The stove is designed around the innovative ethanol canister, which is patented in the EU. The cylindrical, stainless steel canister is packed with a special refractory mineral fibre which adsorbs up to 1.2 litres of ethanol on its surfaces. When the stove is lit, the ethanol evaporates and mixes with air to burn readily, allowing a maximum power of 1.5 kW per burner. Provided that the canister is not over-filled, the ethanol will not leak or spill even if the canister is knocked over. The canister does not need to be pressurised, which minimises risk of explosion. The canister is approximately 240 mm diameter and 50 mm tall, and filled via a 80 mm diameter hole in the top, which is covered by a metal mesh to prevent the fibre from coming out.

The pilot study in Ethiopia trialled two-burner Origo stoves, but one-burner models are now used for the refugee camps because they can accommodate larger pots. The stove body, approximately 290 mm wide by 240 mm deep by 160 mm high for the one-burner model, is constructed from stainless steel. Close attention is paid to safety (for instance, no sharp edges) and durability (careful welding and riveting), giving a working life of 10 to 15 years for leisure use, and a predicted 5 to 10 years for daily use in Ethiopia. The fuel canister clips securely under the stove body. The only moving part in the stove is the regulator, which slides a cover on or off a hole in the top of the stove body, and thus over the opening in the top of the ethanol canister. This regulates the supply of ethanol vapour to the flame. In the closed position the regulator blocks the ethanol from evaporating. On the top of the stove there is a heat spreader and pot stand.

Several design modifications were made for the Ethiopian market, as a result of consumer feedback from the initial pilot study and independent performance tests. The pot-stand was redesigned to enable the use of larger and round-bottomed pots, and raised to allow more oxygen to reach the flame. Better guides were provided to locate the fuel canister in the stove body. Handles were added to make the stove easier to carry and to turn over to refill.

Until now the stove bodies and ethanol cylinders have been manufactured in Europe to Ethiopian design requirements, but the stove bodies will shortly be made in Ethiopia. The Gaia Association has reached an agreement with an Ethiopian business, Makobu Enterprises, for exclusive manufacture under licence from Dometic. A local engineering company has produced the dies which are needed to cut the parts of the stove body from sheet metal, and a local company that produces cooking pots has set up an assembly line to produce 50 stoves a day from May 2008. The quality of stove production in Ethiopia will be checked by Dometic, as a condition of their licence agreement, and every stove will have a serial number.

By the end of April 2008, the Gaia Association had supplied CleanCook stoves to all 1,780 refugee families in Kebribeyah refugee camp, and 50 to households in Addis Ababa. It also had 3,200 stoves on order: 800 for Teferi Ber camp; 2,000 stoves for a government housing development; and 500 for a Catholic social housing programme.

Stoves will also shortly be used in one of the Local Government housing programmes in Addis Ababa, where people can buy new two-bedroom, one-bedroom or studio flats through a loan. In this case, the cost of the stoves will be included in the loan repayments. A 30,000 litre ethanol tank will be provided with other communal facilities for a 2,000-flat development, and ethanol sales will be managed by a community co-operative. In a social housing project run by the Good Shepherd Sisters, stoves will be provided free but users will pay for the ethanol.

Ethiopia has a large, government-owned sugar-cane industry, which produces about 115,000 tonnes/year molasses as a by-product. Some molasses is fed to animals or exported, but the selling price is low and markets are limited. Much of the molasses is simply dumped in rivers or on land, causing extensive pollution. In 1999, a plant was built at the Finchaa sugar mill to produce ethanol from molasses by fermentation. This plant currently produces about 8 million litres of ethanol per year, of which about 2 million litres are used by local industries.

The Gaia Association buys ethanol from the government under an annual contract which has just been renewed. The ethanol is denatured with a bitter additive, to make it unpalatable for drinking, and it is also dyed blue so that it cannot be mistaken for water. This is done at the Gaia Association office in Addis Ababa, before the ethanol goes out to the camp. Each refugee family has to be registered with the UNHCR, and is issued with a stove and coupons for ethanol through the UNHCR rations system. Every ten days, the family exchanges a coupon for ten litres of ethanol.

The stoves can use ‘technical ethanol’ (96% ethanol, 4% water) which is cheaper and easier to make than the 99.5% purity required in ‘power ethanol’ for vehicle use. This means that lower cost ethanol production may be feasible. The sugar mill plant can produce both technical and power ethanol. 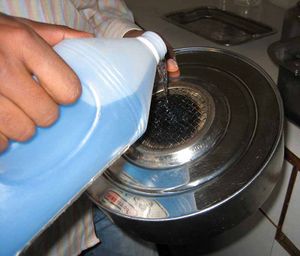 Stove operation is very simple. The empty canister is filled with ethanol from a bottle or jug. Any drops round the filling hole must be wiped off. The canister is clipped onto the base of the stove, then the regulator is opened and a match or lighter used to ignite the ethanol vapour. After a few minutes the ethanol is warm enough to evaporate freely, and the regulator can then be used to adjust the flame to the desired level. When cooking is finished, the canister is left in the stove with the regulator closed, to minimise evaporation of any remaining ethanol.

The Gaia Association employs a full-time coordinator and four members of the refugee community to manage the ethanol stove programme at Kebribeyah. The stove users are trained to fill the stove with ethanol, operate the flame control, store the stove and ethanol safely, and keep the stove clean. They receive a laminated instruction card in their own language, illustrated with pictures to explain the stove use.

The stoves have proved easy to use and very reliable, with no damage to stove bodies reported during the 2.5 years that the programme has been running. Regulators occasionally need repair, but this can be done locally.

Cost of the stove[edit | edit source]

The imported single-burner stoves cost about 530 Birr (£28) each. This will come down to about 320 Birr (£17) with local manufacture, or 530 Birr (£28) for a two-burner model. Ethanol costs about 2.8 Birr/litre (£0.15/litre) at the factory gate, and will retail at about 3.5 Birr/litre allowing for denaturing and distribution costs

Currently the refugee families do not pay for the stoves or fuel because they have very little money and little opportunity for paid employment. The UNHCR and the Gaia Association currently provide 10 litres of ethanol free of charge every ten days to each refugee family, but plan to increase this now that there is a guaranteed supply for the two camps. The UNHCR and the Gaia Association are considering work projects as a way for the users to pay in kind. These may include tree-planting, so that a refugee family would give their labour to help establish a tree-nursery and maintain a number of trees in and around the camp.

Benefits of the Stove[edit | edit source]

There is overwhelming enthusiasm for the ethanol stove among women in the Kebribeyah refugee camp. For them, the main benefits of the stove are the freedom from the burden of gathering fuelwood, and a much safer and more pleasant environment for cooking. A survey conducted by the Gaia Association before the pilot programme found that families used on average 3.7 tonnes/year of fuelwood. Without any alternative stove, wood collection involved a trip out of the camp lasting up to eight hours, every two or three days. Such trips involve hard physical work, with back injuries, grazes and broken limbs common. Even more significant is the great personal danger to women when they are outside the camp on their own, with many reports of harassment, rape and other violence.

The emissions and energy performance of the CleanCook stove have been compared directly with conventional LPG and kerosene stoves by the Aprovecho Research Institute in the USA, using standard laboratory tests. The CleanCook stove performed better than kerosene in all tests: it produced lower emissions of both particulates and CO; it used 30% less energy to boil 5 litre of water in a standard pot; and it brought the water to the boil in 32 rather than 42 minutes. The particulate emissions and energy use for the CleanCook were the same as for LPG, although the LPG stove brought water to the boil in only 23 minutes, and produced lower emissions of CO. A separate study, conducted by the UNDP in Malawi, compared the CleanCook with wood and charcoal stoves. The CleanCook produced only half the CO and less than 1% of the particulates of the wood stove, and used 71% less energy. Compared with the charcoal stove, the energy saving was somewhat smaller (55%) but reduction in both CO and particulates were greater.

Information in this article has been supplied by the Ashden Awards, and is used here with full permission.

Page data
Retrieved from "https://www.appropedia.org/w/index.php?title=CleanCook_ethanol_stove&oldid=601593"
Cookies help us deliver our services. By using our services, you agree to our use of cookies.
Categories:
Maintenance categories:
About Appropedia · Policies · Contact · Content is available under CC-BY-SA-4.0 unless otherwise noted.