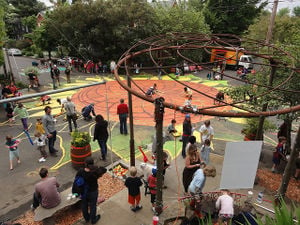 City Repair Project (CRP) is a non-profit organization 501(c)3 that began in 2001 in Portland, OR. To CRP, "localization of culture, economy, and decision-making" is crucial feature of sustainable communities. CRP encourages and empowers individuals of communities to reclaim public space through artistic and ecologically-responsible projects that tear down the barriers between humans and the natural environment [1]. By empowering people to transform their public spaces, CRP and the people they work with have challenged norms and created active and engaged communities.

CRP makes efforts to reestablish the civil aspect of civilization, especially in regards to the modern urban grid standard. Although not the first to utilize the grid system, the Romans largely introduced the urban grid as an effective city planning system [2]. 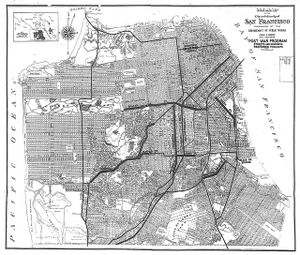 In the grid system, travelers could meet with other travelers at regular intervals, where the streets intersected. But as people began to drive cars more often, intimate interactions began to dwindle. Intersections have become places where traffic and tensions builds up, people don't signal, and violence has increased. CRP believes that the grid system has lead to people feeling isolated from their communities, and has thereby made it difficult for community space to flourish. Whereas cities and towns without a grid system have naturally occurring space for gatherings, with the grid system, meeting places need to be deliberately planned [3].

Architects and city planners have been conceptualizing human reclamation of streets since the 1960s. 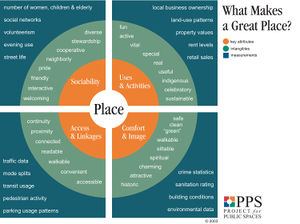 Jane Jacobs and William H. Whyte were among the first pioneers of city planing that was centered on people's needs and aspirations, not cars and supermarkets. This idea is called Placemaking, and its visionaries believe that "when you focus on place, you do everything differently" [4]. By opening neighborhood planning to local residents, the focus shifts from managing people as they shuffle between A and B, to empowering residents to shape their own community experience. 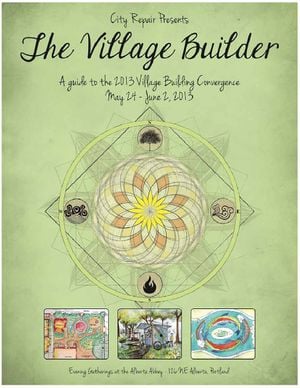 The Sunnyside Piazza is perhaps one of CRP's most famous intersection repair projects. This inner-city intersection in Portland, OR. was transformed into a community space in 2001, in efforts to reduce neighborhood crime and increase individual sense of place [8]. The project seems to have had a positive effect; a study by Jan C. Semenza showed that people in the Sunnyside neighborhood were 30% happier with their neighborhood than people in a nearby neighborhood with a similar demographic [9]. 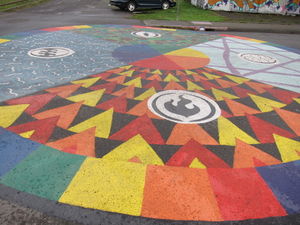 The projects were completed in August of the same year, and are viewable by taking a walk around 8th and 9th streets on the east side of K Street.

Mark Lakeman is an urban place-maker and a co-founder of CRP. As an urban permaculturist, community designer, and activist, Lakeman has worked on many projects with many organizations, including:

Lakeman worked as a large-scale project designer in the 1980s, until starting other urban projects that mimicked indigenous and marginalized societies in terms of community participation, and localized ownership of political and economic power. [11].

Lakeman finished his 2013 California tour on November 11, after speaking at the California Student Sustainability Coalition Convergence at Cal Poly Humboldt. See his calendar for his planned 2014 stops, including various towns on the East Coast of the US; Santa Cruz, CA; Maui, HI; and Breitenbush Resort, OR [12].

Page data
Retrieved from "https://www.appropedia.org/w/index.php?title=City_Repair_Project&oldid=650427"
Cookies help us deliver our services. By using our services, you agree to our use of cookies.
Categories:
About Appropedia · Policies · Contact · Content is available under CC-BY-SA-4.0 unless otherwise noted.