The Chiuri tree [1]is a medium sized tree native to Nepal. It grows mainly in the sub-Himalayan tracts on steep slopes, ravines and cliffs at an altitude of 400 to 1400 meters, particularly in the Chitawan district. Its botanical name is Diploknema butvracea Roxb syn. Bassia butyracea, syn. Madhuca butyracea, syn. Aesandra butyracea). It is also named "butter tree". The main product of the tree is "ghee" or butter, extracted from the seeds and named "Chiuri ghee" or "Phulwara butter".

There is no reliable data on production of Chiuri and its ghee production in Nepal. It is sold by the farmers in a dried form at 12 per pathi (about Rs 5 per kg). The annual production ranges from 60-500 Kg. with an average production of 175 Kg per farmer. Generally, farmers sell 50-60 percent of their total production. The study revealed that the production per tree ranges from minimum of 1 to 14kg averaging about 5.25 kg per tree. Similarly, the yield of the fruit per hectare is estimated to be 100-800kg. The number of tree per hectare is estimated to be 37-90 with an average of about 40.

The Chiuri tree is found on steep and difficult slopes. Climbing the tree is difficult and it is dangerous to harvest the Chiuri fruit. In many instances people fall from the trees and succumb to serious injury; sometimes loss of life occurs. The producers place doko (traditional basket) on one shoulder, pick up the fruit with their other hand and place it into the doko. Normally, the men climb the trees and women gather the fruit that has fallen to the ground. Children also help in the gathering of the fruit.

Importance of chiuri tree among Chepang Community
Chepangs are known for the immense knowledge on forestry products and their collection and preparation. They have special relationship with Chiuri trees as they have custom of giving Chiuri trees to their daughters as gift during marriage. Hence, it is regarded as private resources.

In earlier days, the "ghee" (not to be confused with dairy ghee) was processed at a community level. This is now undertaken at the individual household level. Normally, about 18 kg are required to produce one litre of ghee. The processed ghee is used for domestic consumption. Among the farmers surveyed the consumption of Chiuri ghee varied from 2-5 kg per year per household in Chitwan district.

The chiuri fruit is collected and squeezed to liberate the seeds. After cleaning and drying, the seeds are pounded using a traditional pounder, a "Dhiki", into a fine powder. The powder is steamed on a perforated plate over the boiling pan. The oil is then extracted using a traditional oil expeller called a "Chepuwa". 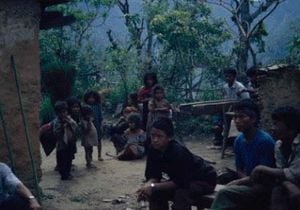 Figure 1: Chepang people training in the Kandrang Valley with an oil expeller in the backgound. ©Emma Judge/Practical Action

The product is bitter in taste due to high content of impurities such as saponins which are carried along with extracted oil. The ghee needs post filtration or purification to make it edible. The final product is white with a strong smell and taste.

The diagrammatic process flow for Chiuri ghee processing is presented as follows. 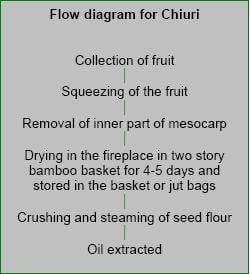 Chiuri ghee is the main source of edible oil for more than one hundred thousand people. This ghee is used to cook vegetables and roti (Nepali bread). Chiuri juice is also consumed to quench thirst.

The potential use of Chiuri products is found in different fields such as confectionery, pharmaceutical, vegetable ghee production, candle manufacturing and soap making. It has been found to be effective for rheumatism. It is also used as an additive in animal ghee.

The cake produced after processing of Chiuri is used as manure which has pesticide properties and is used on paddy fields (Rs 25/pathi) and banana plantations. It is also used as a wormicide, nematicide, molluscicide, rodenticide and insecticide. The cake obtained during oil extraction from Chiuri can be used as crude fish poison substituting the dangerous chemical pesticides. It can be used as feed in poultry farming after detoxification. It can serve as a source of saponin for industry in future.

Chiuri products are usually handled by the Chepang community and they are used mostly for household consumption. They do not have accurate information about the market price of the Chiuri. The price of the fruit is determined by the dryness of the fruit. Dried fruit fetches a higher price to a raw fruit. Raw fruit is black in colour and turns white when dried. Preharvest selling of the fruit to the traders is common. The traders provide cash according to requirement of the producers. The producers sell the fruits at NRs 12-14 per 2.8 Kg. (Pathi) and the ghee is sold at about NRs 65 per kg.

In most of the cases the producers sell the products directly to the traders hence the traders do not have to pay the transportation costs from area of production to the collection centre. Traders bear the cost of the packaging which cost them about NRs 10 per bag. Normally the traders store the Chiuri for almost 2 months probably to remove excess moisture. The traders assure the quality of the Chiuri before buying. Large size and fleshy Chiuri fruit are considered good quality whereas off-colour fruit is considered inferior. Traders/middlemen are involved in marketing of dried chiuri with a profit of Rs 3-4 per pathi (Rs1.25 per kg). During our survey, the average profit was estimated to be in the range of 10-12 percent.

Some of the consumers in the Chitwan district have been using Chiuri ghee for the last five decades and most of the households are habitual consumers of ghee. The consumers purchased ghee directly from the producers at NRs 65 per kg.

The equipment required to improve Chiuri ghee processing is as follows. The tentative cost of the equipment is about NRs 200,000 (£200).

• The processing of the product requires substantial quantity of fuel-wood which leads to deforestation.
• Low rate of oil extraction by traditional expeller "Chepuwa" which has only 38 percent recovery.
• Lack of product diversification
• Transportation of fruit on tractor from collection centre to nearest market centre is difficult during rainy season as the stream becomes impassable during that period.
• The taste of Chiuri product is not familiar among most of the consumers.
• No brand name has been used on the product and packaging has not been done using tin can. Organised marketing of fruits and its product has to be done.

• Intervention of efficient and low cost processing technology has to be made to replace traditional technology. Quality and quantity of ghee can be improved with a mechanical expeller as oil content in the chiuri kernel is about 50-70 percent. The rate of extraction by traditional expeller "Chepuwa "is only 38 percent.
• Training on entrepreneurship building and marketing seems essential for the producers and processors.
• The potential use of Chiuri and its export to foreign market should be explored.
• Low cost dryer needs to be promoted.
• Research is needed to establish its potential uses in different fields.
• Promotion of Chiuri products in urban areas through a wider marketing networks and promotion and publicity.

Page data
Retrieved from "https://www.appropedia.org/w/index.php?title=Chiuri_-_the_Butter_Tree_of_Nepal_(Practical_Action_Brief)&oldid=600630"
Cookies help us deliver our services. By using our services, you agree to our use of cookies.
Category:
Maintenance categories:
Comments
Privacy policy · About Appropedia · Disclaimers · Mobile view · Content is available under CC-BY-SA-4.0 unless otherwise noted.
</html