Rainwater harvesting is an ancient technology.[1] Today's systems are certainly much different than those that people implemented before the dawn of PVC.[2] The idea is simple enough:

The question is: how do you get clean water from that downspout and into a holding tank where it will be easily accessible? This project seeks to address that question with a simple and easily interpreted small-scale version of a rainwater catchment system. 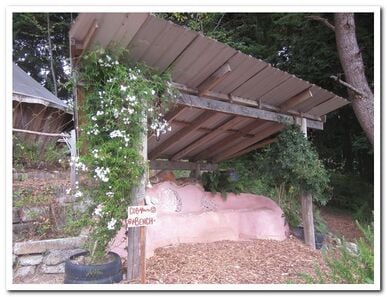 Cal Poly Humboldt's Campus Center for Appropriate Technology, or CCAT, is a "live-in demonstration home" where students have the opportunity to live amongst and learn about various aspects of appropriate technology. It is a resource for the campus and the greater community that allows for the dissemination of ideas and examples of appropriate technologies. One such example is a cob bench that was built over the last few years. Since cob is made of clay, sand, and hay, the bench needs to be sheltered from rain.[4] There is a roof over the bench to do just that. This roof is sizable enough to create a significant amount of runoff during a storm event. This runoff will be collected through a catchment system. Conveniently enough, the structure is located amongst CCAT's gardens and above their orchard. This will allow for the collected rainwater to be used without any assistance from pumps, due to the tank's elevated position above the target use area. When collecting rainwater to be used in a garden, a simple system can be put together relatively easily. This system is meant to be a small-scale model of a full catchment system, therefore, for educational purposes, it may be a more complex system than one would expect to find in a garden.

Replicable--The system needs to be simple enough to be easily replicated.
Educational--The system will serve as a small-scale example of rainwater harvesting.
Accessible--Because of its small size, this system will be easily accessible. One will be able to see all of the components of a rainwater harvesting system in a relatively small space.
Adaptable--The system will be simple enough that visitors will be able to see how the system works together, and that it can represent both a small-scale garden catchment system, as well as a larger-scale home catchment system.
Durable--The system should last through many years of use.
Efficient--All water collected should be used.
Frugal--This system will be built with many reused materials to show that this type of system can be fashioned out of materials found around the community. 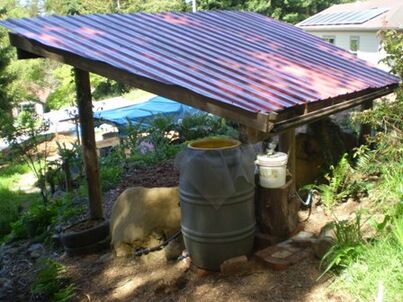 These rainfall averages show that the amount of available water that falls from the sky is varied throughout the year. In Humboldt, the rainy season usually occurs during the fall, winter, and spring, while the summer months are relatively dry. This demonstrates a need for a relatively large holding tank that will collect water through the rainy season, making it available during the drier summer months.

The roof footprint is the area upon which rain will fall. An easy way to measure your footprint is to pretend that your structure doesn't have a roof, that you are measuring the footprint of your structure. This is the actual area that water is falling on. Also, the footprint area is not affected by the slope of your roof. Measure the length of the walls of your house or other structure (garden shed, dog house, etc.), then find the surface area.
The roof covering the cob bench is nearly trapezoidal. With some measurements, it looks a bit like this: 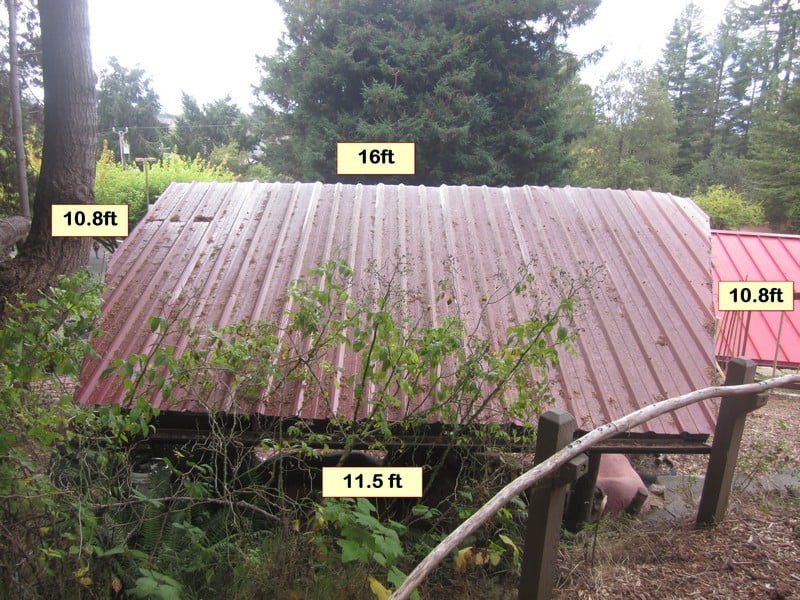 For this specific design to find the area of our roof we will need to use the equation for the surface area of a trapezoid.

Now for R, we need to know the precipitation in rainfall per time. This is where the precipitation graph comes in handy. To find out the collection potential for a month you will look up the number of inches it rains in that month. That number becomes R in the equation. Here is an example for the month of March.

The equation for collection potential of march:

When it starts to rain, the first flow of water off of your collection surface may be contaminated by dust, pollen, bird plop, or leaves.<ref>ibid.<ref> A simple first flush system will allow these contaminants in the initial rainfall to settle out in a bucket separate from the main storage tank. When it starts to rain, the water that first flows down the roof washes off the dirt and grime and sends it into your first flush bucket. The first flow of "dirty" water will settle out in the bucket. As rain continues to fall, the water flowing into the system is progressively less dirty, and the bucket fills up. This "cleaner" water enters the now full bucket, which overflows into the main storage tank. This maintains a cleaner environment inside the main storage tank, and makes cleaning the system quite a bit easier.


As for sizing your first flush system, opinions vary as to how much water it is necessary to divert. One recommended diversion calculation, and the one used in this particular catchment system, is one or two gallons of rainwater diverted for each 100 square feet of collection area.<ref>ibid.<ref>
So, for example, this roof is almost 150 square feet, so about 1.5 gallons of water is all that needs to be diverted.
Take note, a first flush diverter may not be necessary for collecting water to be used solely to water plants. A simple screen to filter out debris may be adequate. This would simplify the entire system and decrease the number of plumbing connections. 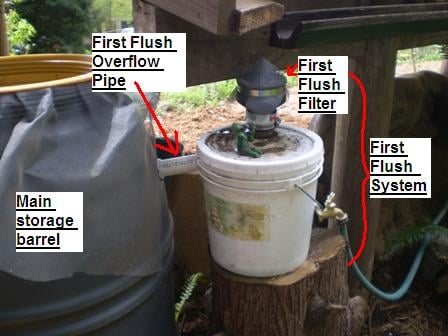 The First Flush system is made up of the filter, reducer, bucket, overflow pipe, and a slightly open hose bib.


The Filter is a square of window screen cut and folded to form a cone shape.

This filter and reducer act as a funnel that catches the water running off of the gutter and sends it to the 2 gallon first flush bucket. The smaller end of the reducer is fitted around a short section of 1 1/2 inch PVC pipe. The other end of this pipe conveniently fits into a hole that was already in the lid of the bucket. The pipe is sticking through the underside of the lid just enough to keep the reducer stable and in place. 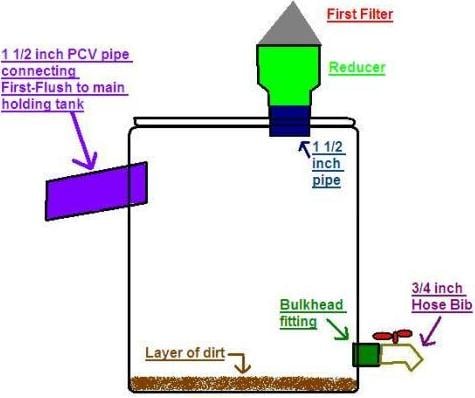 Now that the lid is all ready, it is time to drill some holes. Use a hole saw or spade bit that is the same size as your overflow pipe. In this case, it is 1 1/2 inches. Drill this hole about 2 inches from the top of the bucket. Insert a section of pipe into the hole and seal it with some good waterproof silicone sealant. This pipe is the connection between the bucket and the barrel. You will insert it into your barrel later.


The next hole is only slightly more tricky. This one will be the location of the automatic reset system. It sounds complicated, but it is actually quite easy. Size your hole depending on the size of the bulkhead fitting you will use to attach the hose bib. This hole is located about 1 1/2 inches from the bottom of the bucket. After drilling the hole, attach the bulkhead fitting, then screw the hose bib into the fitting (Fig. 8). I applied a little Teflon tape to the threads for a more secure fit. Next, attach a length of hose to this fitting. Keep the hose bib slightly open so that the water in the first flush bucket will slowly drip out. (This is the idea of the automatic reset. The water will drip out slow enough so that the bucket will fill during a rainstorm, but afterwards, it will drip out and be empty before the next rain.) It should flow through the attached hose to an area that won't get too swampy. In this system, the water slowly drips out of an old hose with holes drilled into it, that waters several blueberry bushes.

The first flush bucket overflows into the 55 gallon main storage barrel through a section of 1 1/2 inch pipe. The barrel I used was already fitted with a split hose spigot and bulkhead fitting. Otherwise, you would follow the same steps to install the hose bib as was demonstrated with the bucket. The spigot on the barrel was placed about 3 inches from the base of the barrel (Fig. 12). Also, to keep mosquitoes out of the barrel, a section of window screen was secured over the opening.


The water in the barrel can be accessed in two ways. A hose can be attached to one of the spigots, or one can fill a watering can by placing it in the recessed hole beneath the spigots. It is important to have an overflow hole and/or hose near the top of the barrel to redistribute any excess water. This hose can be lead to a place designated as an overflow site, or it can be connected to another barrel, which would have an overflow hose as well.

!!!NOTE!!! When acquiring a barrel, make sure it is a FOOD-GRADE barrel. Often acids, solvents, oils, or other caustic liquids come in this type of barrel. You probably don't want these residues on your plants. You can find food-grade barrels at local food manufacturers, soda bottlers, recycling centers, or on your local Freecycle Network http://www.freecycle.org or Freegle. In fact, get acquainted with Freegle and Freecycle. You can find tons of useful project materials for free (such as, a gutter or an old hose) through this amazing resource.

The water collected in this type of system is NOT POTABLE, that means, don't drink it! Your garden will be happy to consume this water, but your stomach will not! To get an idea of what it takes to make your collected water consumable, check out Ersson rainwater harvest and purification (original).

In order for this system to function well, it needs some occasional attention. 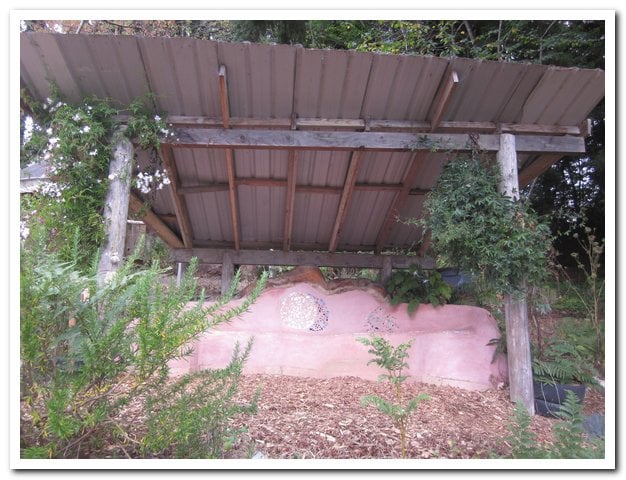 I ventured over to CCAT and checked in on the small rainwater catchment system, roughly 3 years after it was built. I found a system that was not in use at all and the current student directors had little knowledge concerning it. When I went to look at it,the gutter was full of tree debris, and while there was water in the storage barrel, there is no hose hooked up. When I first asked the CCAT codirecter if the system was in use he said no, that there were several problems with it and that it no longer worked. As I asked more questions (through email), he responded that he went over to check out the system and to his surprise yes it does still work.

As of right now the first flush needs some maintenance, but could easily be restored with a little bit of effort.

So what went wrong?

This is where the word Appropriate comes in. This system works, but the end use isn't needed. If a technology isn't needed, or if it doesn't make actions more efficient in the given context, it probably wont be used.

The system as a whole doesn't offer much advantage for watering. In order to use the water collected to water the CCAT gardens and food forest, the water would have to be hand carried or an irrigation system would have to be designed and connected to it. Given the small scale of the system (small roof), and there is already other means of watering in use, there isn't much incentive to design and set up a permanent irrigation system to it.

Currently CCAT has no plans to repair or put the system back in use. There are talks beginning of actually taking down the project and replace it with something a bit more appropriate: a living roof.

Page data
Retrieved from "https://www.appropedia.org/w/index.php?title=CCAT_small_rainwater_catchment&oldid=645079"
Cookies help us deliver our services. By using our services, you agree to our use of cookies.
Categories:
Maintenance categories:
About Appropedia · Policies · Contact · Content is available under CC-BY-SA-4.0 unless otherwise noted.