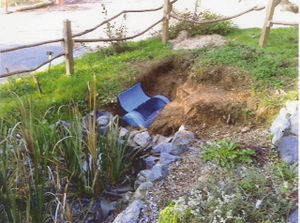 The Campus Center for Appropriate Technologies (CCAT) is a student run organization that promotes sustainability through an environmentally responsible lifestyle. One way they demonstrate their mission to the public is through a greywater marsh system. A typical greywater system reuses effluent from bathroom sinks, showers, and laundry operations. The CCAT greywater marsh system is unique, because it incorporates kitchen effluent into the gray water system. The addition of the kitchen effluent requires the use of a grease removal unit, and a particulate filter. Design problems during previous attempts to address this issue have resulted in grease and stagnant water build up in the upstream surge tank and reduced efficiency in the downstream grease trap. In addition to reducing efficiency these problems have made the maintenance and operation of the grey water system difficult. Team VuTastic has been assigned the task of redesigning this system.

The original grease trap was designed with the condition that it should be cleaned regularly however accessibility issues led to grease build up and the effectiveness of the system was severely reduced. The upstream Surge tank was designed to operate as a secondary particulate filter, over time grease was able to build up in the filter and led to problems with stagnant water in the tank.These factors resulted in discharge water entering the CCAT marsh with grease and oils.

The design solution that best met the criteria for the project required the modification of two separate components within the CCAT gray water system. The Switch and Swap is the grease removal unit. The Surge tank has been modified to reduce problems during operation. 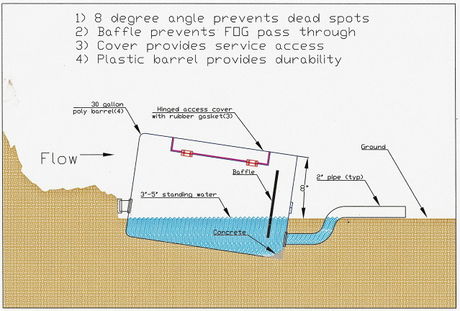 Figure 1, Drawing of the Switch and Swap

The Switch and Swap[edit | edit source]

The grease separation unit or grease trap is called the Switch and Swap and is shown in Figure-1. The Switch and Swap is made from a recycled 30-gallon polyethylene barrel and barrel is installed slightly below current grade with a downstream slope of 8 degrees from the horizontal axis. The slope will prevent dead spots or stagnant areas in the effluent flow. Typical 2" PVC inflow and drainage pipes are installed as shown in Figure 5-1 and is connected to the existing gray water system with couplings. The trap serves as a reservoir for 5-6 gallons of standing water. Gray water effluent enters and is cooled as it mixes with the standing water, allowing Fats Oils and Grease, or FOG, to rise to the surface of the reservoir. A baffle is installed to prevent the FOG accumulated on the reservoirs surface from leaving the trap. Routine cleaning is performed by skimming the accumulated FOG from the surface of the reservoir. Access to the trap interior is provided by a hinged cover, as shown in Figure 5-1, a rubber gasket installed around the cover reduces the chance for larval infestation. 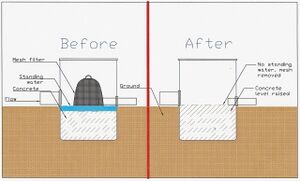 The Surge Tank is shown in Figure-2 before and after the modifications. A concurrent project has eliminated the need to remove particulates in the Surge Tank by installing a particulate filter under the kitchen sink. These developements allowed us to remove the mesh filer and increase the level of concrete in the tank, eliminating standing water and reducing the chance for FOG to accumulate upstream from the Switch and Swap.

Instructions for Implementation and Use After installation, initial implementation is accomplished by filling the reservoir within the trap. Once full the Switch and Swap is ready for operation. Aside from routine cleaning the Switch and swap will require minimal maintenance or involvement from CCAT personnel.

Weekly Cleaning The suggested cleaning schedule requires that accumulated FOG to be removed from the Switch and Swap on a weekly basis. Removing accumulated FOG is accomplished by unlatching and lifting the hinged cover to allow access to the reservoir of the trap. FOG can then be skimmed from the reservoirs surface and be recycled or discarded. Care should be taken when closing the trap to insure proper seating of the gasket. Ideally the cover should form a tight seal that will prevent insect infestation. The weekly cleaning will require approximately 10 to 15 minutes.

Quarterly Maintenance The Switch and Swap should be flushed out quarterly. This can be accomplished by running a large volume of potable water directly into the reservoir after routine cleaning. Potable water should also be used to rinse interior components of the Switch and Swap. The cover is then closed as described above. Quarterly flushing if done correctly will remove any sediment that has accumulated on the bottom of the reservoir. Quarterly flushing will also help minimize foul odors sometimes associated with grease removal systems. Quarterly flushing will require approximately 15 to 20 minutes.

There is also need for field testing of the Surge Tank modifications. Design and implementation efforts have been focused on eliminating grease build up in the Surge Tank.The conceptual model fit the objective for the modifications however physical testing has been impossible without the entire gray water system online.