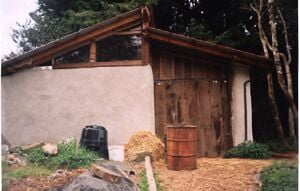 This site attempts to give the viewer, who is hopefully excited about the idea of strawbale construction, resources and links to learn more. Topics discussed on this site include appropriateness as a construction material/design, history, and frequently asked questions, and methods of construction.

The picture above is an image of the strawbale shed finished in 1999 which stands behind the CCAT house on the Cal Poly Humboldt Campus (Arcata, Ca.). Daniel Poten, who chose to build the shed as his senior project along with a hearty team of volunteers finished the construction of the 400 square feet shed now used as storage space and part of the pedal-power workshop at CCAT.

Design and Construction: The design of the shed utilizes a timber frame filled with strawbale walls, an external pinning attachment system to brace the walls, a metal roof to last a lifetime, and cement-based stucco spread on the inner and outer walls to provide a breathable, waterproof, and fire-resistant protection layer to the shed. The timber donated to CCAT from the California Conservation Corps was erected into a three-beam per wall timber skeleton for the shed.

In the design of the shed, an external pinning system was employed, meaning that rebar, used to stable the bale walls, was attached to the frame on both sides of the bales. Two professional architects were hired to aid with the stacking and bracing of the bales to form the walls. Two metal threaded cables were attached to each side of the bale walls, running from diagonal to cross diagonal corner, creating an x-formation across each wall. Finally, these cables were threaded into a system of attachment which bolted these cables to the shed's frame. 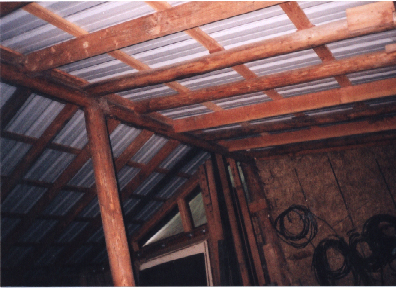 After the walls were erected, metal netting was attached to both sides of the bales, and cement-based stucco was applied to seal them off. Ribbed steel sheeting was used for roofing materials, and an elongated overhang of the roof was utilized on the shed to reduce the moisture from rain near the building. A French drain was installed along with gutters to drain water away from the building. Also, passive solar lighting principles were utilized to brighten up the shed. The roof was built on a split level so as to provide room for a thin vertical skylight straight across the shed's roof axis. As of yet, the permanent building material of this skylight has not been confirmed as the skylight is still under construction.

Further exploration: As strawbale construction is a new development technique to this area (only two or three other strawbale structures currently exist on the California north coast), several holes were made in the interior walls so that the monthly changes of moisture content within the straw could be monitored in the future. CCAT is annually updating reports on the performance of the building in the Humboldt coastal climate.

A community constructing a strawbale structure in New Mexico. (Pic. 3)

Appropriate materials: By using strawbale as a construction material, you are making use of an agricultural byproduct waste material. Thus, by helping to turn straw bale into a commodity in the economy, you are helping to reduce the waste of the agriculture industry. Consider the fact that 200 million tons of straw are discarded or not fully utilized annually in the US (findings of straw-bale expert Matt Myhrman). This is enough strawbale to construct five million, 2,000 sq. ft. houses each year (about 4X's the houses currently built annually).

Straw bales are extremely energy efficient and insulating building materials due, in part, to their thickness. Also, straw bale is especially economical as a building materials (The 300 standard 3-string bales needed to build a basic 2000 sq. ft. cost about $1000 currently). In most rural areas, the strawbale can be found locally at minimal transportation costs. In addition, strawbale has been tested and found to be a stronger material in earthquakes than masonry. Consider the following excerpt from http://web.archive.org/web/20030201084405/http://www.eren.doe.gov:80/buildings/documents/strawbale.html :

"The earthquake was in the 1970s and it was either 5.3 or 5.8," Chuck Bruner, a resident of one of the houses told The Mother Earth News. "There wasn't a single crack in the house. You can live in this house comfortably during the summer. It stays nice and cool. We have never needed any air conditioning, and in summer we get days up in the 90s. Also, last winter, I only turned our small bedroom heater on twice. If I had to guess how our utility bills compare to those of our neighbors, I'd have to say our bill is about half."

Photo to the left: Example of modern strawbale home under construction (Pic. 4)

There is also so much room for flexibility and creativity in straw bale design that the common homeowner can simply alter structure design to maximize passive solar heating and other benefits of site specific conditions. Also, oftentimes strawbale structures are aesthetically pleasing as they look earthy and unobtrusive in most landscapes.

A: Insects have no interest in strawbale because all the nutritional value of the plant is taken with the grain, absent in straw. Wood, actually, is more susceptible to insects as it is full of nutrients. As long as proper construction precautions are taken that includes barriers to keep out pest and to resist water, well-built strawbale structures, constructed with dry bales, have been known to stand for centuries.

A: No, well finished strawbale structures (such as with plaster, stucco, cement) are often listed as being a two-hour fire-resistant structure. Consider the following:

"The strawbales/mortar structure wall has proven to be exceptionally resistant to fire. The straw bales hold enough air to provide good insulation value, but because they are compacted firmly, they don't hold enough air to permit combustion."
-The National Research Council of Canada

Q: Can the strawbales be load bearing?[edit | edit source]

"Compression tests have been done to see if load-bearing walls are safe. The result of these tests show that a single bale of straw can withstand a load of 10,000 pounds per square foot. This is the equivalent to the bale supporting two-dozen pick-up trucks without breaking" (Everett 56).

Two-hundred year old strawbale homes in Europe can still be found in the countryside. In the United States, straw bale construction rose in popularity after the mechanical straw/hay baler became common at the turn of the century. Strawbale construction became popular for squatters and homesteader in the harsh country of the western plains such as Nebraska and Wyoming where there was often little timber available for construction. Nearly one hundred years later, in 1992, the first legally approved strawbale building was finished in California, named, the Noland Project, a ranch headquarter and residence in eastern California's Owens Valley.

Photo Credits for this site: Photos noted below courtesy of . . .[edit | edit source]