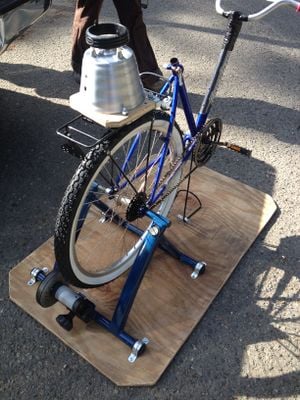 The CCAT Bike Blender 2015 was constructed as a class project by students of Cal Poly Humboldt's Engineering 305: Appropriate Technology class. It is a mechanical, interchangeable design that can be mounted on many different bicycles, rather than being permanently attached to one stationary bike. This bike blender works by using the rotation of the bicycle's rear wheel to turn a vertical shaft which rotates the blender blades. It works very well for making smoothies and is relatively simple to construct.

Students Bryce Goldstein Goldstein and Carley Bramhill designed and built a bicycle-powered blender to be used and displayed at CCAT, located at Cal Poly Humboldt in Arcata, California, United States of America. The project is part of Lonny Grafman's ENGR 305: Appropriate Technology class in the Spring semester of 2015 (January - May). CCAT's original bike blender was built in 1997 by consultant Bart Orlando and student Saramie Williams, and it was used at CCAT and campus-wide events.[1] Unfortunately, this icon of appropriate technology has since been broken and lost. CCAT would like to have another bike blender built to demonstrate the use of pedal power.

The objective of this project is to design a bicycle powered blender, to be displayed and utilized at the Campus Center for Appropriate Technology (CCAT), at Cal Poly Humboldt in Arcata, California, USA. This iteration will be mechanical in design, translating the momentum generated by pedaling the bicycle directly to the operation of the blender. The intention is to keep the design as simplistic as possible, in order to improve efficiency, as well as ensure that any future maintenance can be performed by any adult, with or without mechanical expertise.

The following criteria will be used to evaluate potential designs and choose the most appropriate one for this project. These criteria were chosen based on the suggestions of our CCAT contact on this project, Julian Quick, as well as Bart Orlando, who is kindly assisting as an external adviser. The scale (1-10) represents the weight of consideration (from least to most) for each of the listed criteria.

The following is a brief review of the available literature and web resources pertinent to the CCAT Bike Blender 2015.

Pedal power is a technology that is common in most of the world. It is used for transportation, and in some cases electricity generation or mechanical work.[2] Pedal power is useful because bicycles are designed to hold a large amount of weight and transfer humans' kinetic energy into low-friction mechanical energy. According to the literature reviewed by a past bicycle blender project team, "an output of 71 watts can be sustained for 60 to 120 seconds at 90 rpm" by an untrained adult male pedaling.[3] One purpose of a bike blender is to replace an energy-intensive regular blender with a more sustainable method of making smoothies. A bike-powered blender can also be used as an educational tool as well as an appliance. It can demonstrate the use of pedal power, and also get kids interested in healthy living.[4][5]

A bike-powered blender may sound like a silly idea to some. Why would we put energy and resources into an appliance that only has one function? We are building the bike blender as a way to demonstrate the alternative uses of bicycle parts and human power, rather than make a product that would be desirable to everybody. Also, electric-powered blenders run off of grid electricity, which is typically generated from non-renewable sources such as coal or natural gas.

The are multiple types of bike blenders. There are advantages and disadvantages to each, as described below.

Our bike blender is mobile, meaning that the bicycle can be ridden as a normal bike if the blender stand is removed. The mobile bike blender can also be fitted to many different bikes, and is relatively easy to transport. Our design will use some of the ideas and materials presented in Foodshare.net's "Build Your Own Bicycle Powered Blender" video.[6]

CCAT did not ask for any interpretive materials. Based on other projects at CCAT, it could be beneficial to have a sign explaining how to operate it safely and why it is relevant to appropriate technology and the purpose of CCAT.[7]

This timeline was intended as a guide so we knew what we should be working on at a certain time in the semester. It also allowed our client, CCAT, a glimpse at how we planned to accomplish our project goals within the time allowed.

This is our budget for the project. It includes costs for materials based on prices we paid, assumed cost if a team member had not already owned a material, and some materials that were free from CCAT or sources of scrap. CCAT has a $200 budget for our project, so we needed to have the total cost be under this amount. Additionally, a commercial version of this device currently retails at $250. So, the optimal cost of production for our version was determined to be well below that value.

We built the bike blender using the materials listed above. The following table shows our construction methods. 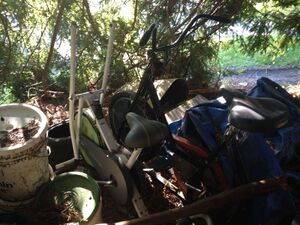 Caption
Choose what kind of bike blender to construct. CCAT had these old stationary bikes sitting outside in their scrap pile, which we recognized as the remains of past projects. We did not end up using these bikes, as we ended up making a mobile design. Instead we purchased a bike storage rack and a trainer stand, which will attach to a regular street bike.
2 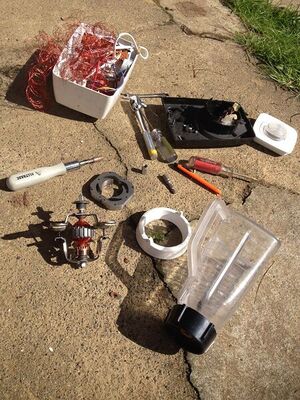 Caption
Optional: Disassemble your blender's original base. This will help you understand how it works, and you will use some of the internal parts in the construction of the new base.
3 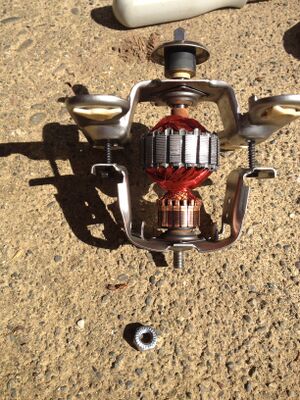 Caption
Take apart this piece from inside the blender base. One side of the outer bracket can be screwed into the wooden base to hold the drive shaft in place, as shown in the next step.
4 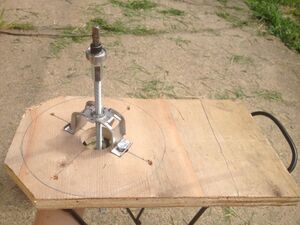 Caption
Cut the wooden board to fit the bike rack, and then cut a round hole in the wooden board the size of the skateboard wheel. This hole should go slightly to the left of the middle, by about a half inch. Ours was drilled in the center, which was a mistake. One half of the metal brackets from the previous step should be screwed into the board so it sits centered over this hole. Then begin to assemble the drive shaft using a metal rod, drill chuck, and blender coupling and rectangular coupling piece (pictured at the very top).
5 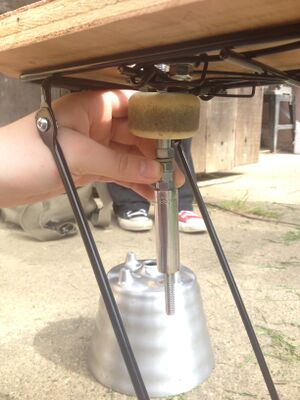 Caption
Put together the rest of the drive shaft, with the drill chuck on one end and the blender coupling on the other end. It is not fully assembled in this photo, as we were experimenting with attaching different cylindrical pieces to the drive shaft. The skateboard wheel's center bearing is removed so that the rod can be placed inside so it rotates freely. The wheel is then glued into the hole in the board.
6 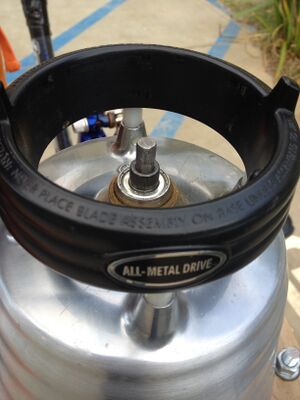 Caption
The pitcher base (we used a steel base) is then screwed to the board. It should be centered over the bracket and wheel so that the drive shaft sticks up through the top where the blender coupling attaches to the rectangular coupling piece, an unattached metal piece that should be kept in the parts storage bag when not in use. The board is then glued or screwed onto the bike rack so that the drive shaft fits through the bars.
7 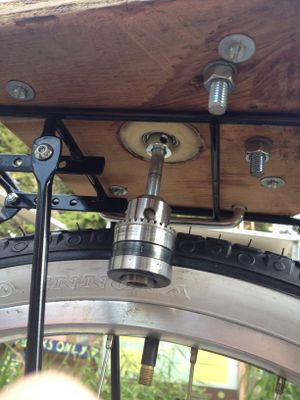 Caption
The finished product, shown from the underside. Underneath the blender base you can see the drill chuck, which presses against the bicycle tire and rotates the blender's drive shaft when the wheel spins. We got the idea to use a drill chuck from Foodshare.net's video[6]

Caption
Put the back wheel of the bicycle up on the trainer stand.
2 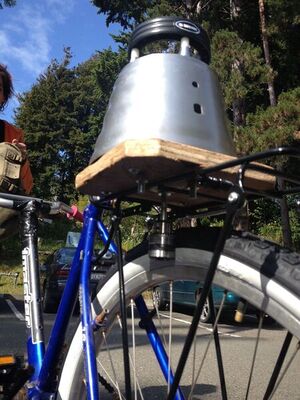 Caption
Attach the rack/base assembly to the bike using the screws in the bag labeled "bike blender parts". The drive shaft should be placed firmly against the left side of the tire.
3 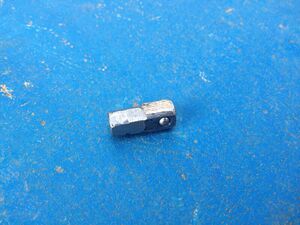 Caption
Put this coupling piece in the hole at the top of the base, and set the blender pitcher on top of it.
4
Place ingredients in blender pitcher, and replace the lid. Now you can get on the bike and start pedaling.
5
Enjoy your smoothie!

The bike blender will need to be stored in a location where it will not rust, and where all the pieces can be kept together and not get lost. Also, the pitcher component should be washed after use to keep it clean and sanitary. Of special concern are the small parts including the screws and the coupling piece. They are in a plastic bag labeled "Bike blender parts". The coupling piece could be especially easy to lose if somebody leaves it in the blender base while transporting it.

We did not develop a regular schedule for maintenance, as this project will most likely only need to be maintained whenever it is used.

Everything works!!! Just turning the pedals on Carley's bike around once made the blender blades spin very quickly and loudly. Carley tested it with a small amount of ice, and it was able to crush the ice and produce a good smoothie. We recommend using crushed ice for future smoothies to ensure that there are no lumps and that you don't put to much strain on the blender.

In the end, we created a very cool bike-powered blender that didn't cost very much money or take a lot of specialized experience or tools to construct. The hardest part was trying to find a cylindrical piece to transfer the rotation of the bike wheel to the rotating axis of the blender. The drill chuck worked very well for this purpose. Also, we tried to make our design a little bit different than all the previous bike blenders we found in our research, so we didn't have any specific instructions to rely on. This meant that the blender was sometimes hard to design, and because we used parts from scrap it could be difficult to replicate exactly.

We learned a lot about bicycles and blenders. Neither of us had much experience with either thing, aside from the typical uses. When we took apart the blender we were fascinated by the inner workings. Also, we were surprised by how complicated it is to find pieces that would work for the project, as mentioned above.

In the future, CCAT may wish to have interpretive materials to accompany the bike blender. A sheet describing instructions and maintenance would be especially beneficial. Hopefully CCAT will keep our emails in their files and will contact us if they need assistance with this. I also hope to see the bike blender used at future events!