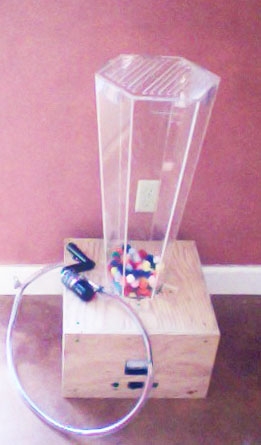 The Bubble Box was created by Team Jumanji to fulfill the need of CCAT to have a functioning Kid's Zone. Other options were considered as a final solution to CCAT's problem, but the Bubble Box was found to have the best blend of the criteria we discussed. The project underwent many changes to become an anti gravity simulation that children can power through a hand crank.

There are many interesting aspects of CCAT for adults to view, however appropriate technology is not as interesting to children who don't understand the environmental, economic, and personal impact of sustainability. Without an Appropriate Technology Kid's Zone residents of CCAT will have a more difficult time touring the house to parents who bring along kids.

The main goal of the Kid's Zone is to entertain children while their parents are touring CCAT. An important side goal of the project is to educate children about appropriate technology. Team Jumanji chose to create the AT Kid's Zone, which ended up being the Bubble Box, because the nature of the project was comparatively unrestricted. With the intentions of CCAT in mind Team Jumanji came up with the following set of criteria ranked by measure of importance (10 being most important, 1 being least important).

The Bubble Box is an original product created and constructed by Team Jumanji for the CCAT Kid's Zone. The Bubble Box converts kinetic energy into electricity using a hand crank. A fan is powered by this electricity which generates wind flowing through a cone filled with light weight cloth balls. Once the fan reaches near full power, the cloth balls float towards the top of the chamber. As seen in Figure 2 the entire structure consists of three key components; the hand crank, base, and conical wind tunnel. An AutoCAD drawing in Figure 3 gives the Bubble Box's dimensions.

The Bubble Box hopefully will be used by children at CCAT for many years to come. However, Team Jumanji planned for the possibility that the Bubble Box could be expanded upon. This increase in versatility came through connecting a toggle switch to a DC plug. If any future projects wanted to use the bubble box as a launching point they could use the DC plug as their source of power.

Page data
Retrieved from "https://www.appropedia.org/w/index.php?title=CCAT_Bubble_Box&oldid=640069"
Cookies help us deliver our services. By using our services, you agree to our use of cookies.
Categories:
About Appropedia · Policies · Contact · Content is available under CC-BY-SA-4.0 unless otherwise noted.