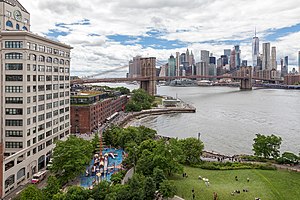 Brooklyn Bridge Park is an 85-acre (34 ha) park on the Brooklyn side of the East River in New York City. Designed by landscape architecture firm Michael Van Valkenburgh Associates, the park is located on a 1.3-mile (2.1 km) plot of land from Atlantic Avenue in the south, under the Brooklyn Heights Promenade and past the Brooklyn Bridge, to Jay Street north of the Manhattan Bridge. From north to south, the park includes the preexisting Empire–Fulton Ferry and Main Street Parks; the historic Fulton Ferry Landing; and Piers 1–6, which contain various playgrounds and residential developments. The park also includes Empire Stores and the Tobacco Warehouse, two 19th-century structures, and is a part of the Brooklyn Waterfront Greenway, a series of parks and bike paths around Brooklyn.

The park's first portion, Pier 1, opened in 2010. The land for the park was formerly an industrial stretch of waterfront owned by the Port Authority of New York and New Jersey. After the city and state signed a joint agreement in 2002, site planning and project funding proceeded. The first work, undertaken in 2007, involved the demolition of a warehouse under the Brooklyn Bridge. Since the opening of Pier 1, several other portions of the park have been completed. As of July 2018, the park was 90% complete. However, there have been disputes and lawsuits over several aspects of Brooklyn Bridge Park, including the construction of residential developments to help pay for the project.

Brooklyn Bridge Park is overseen by the Brooklyn Bridge Park Corporation, a not-for-profit organization that operates and maintains the park, as well as oversees its construction. The corporation's mission is to "create and maintain a world class park that is a recreational, environmental and cultural destination enjoyed by residents of, and visitors to, New York City".

From Wikipedia:Brooklyn Bridge Park
Page data
Retrieved from "https://www.appropedia.org/w/index.php?title=Brooklyn_Bridge_Park&oldid=656466"
Cookies help us deliver our services. By using our services, you agree to our use of cookies.
Categories:
Maintenance categories:
About Appropedia · Policies · Contact · Content is available under CC-BY-SA-4.0 unless otherwise noted.