Biomimicry - Nature as a model, measure, and mentor[edit | edit source] 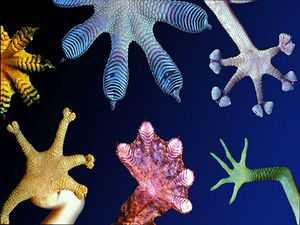 Biomimicry (also known as biomimetics) is a new scientific idea of using nature's efficient examples and relating them into human society. Because nature is so efficient and self sustainable, it would only make sense to shape our way of life around it in order to create a more environmentally sustainable world for humans. From using the idea of photosynthesis for solar cells or burrs that stuck onto fur or cloth which gave way to the design for Velcro, biomimicry surrounds us in our daily lives.

While the actual term ‘biomimicry’ is relatively new and originates from the 1960’s, the concept of deriving ideas from nature’s example is not. Ancient Greek mythology describes the story of the inventor Daedalus and his son Icarus, who were held prisoner in the Labyrinth of Crete. In order to escape, Daedalus fashioned wings made out of wooden framing, wax, and feathers. Although Daedalus’s intent for making the wings may have just been to copy the way birds flew and didn’t hold the other purposes we now attach to biomimicry, the trend of creating things based off of traits found in nature had begun.

In more modern times, the realization has occurred that the resources of Earth are finite and the movement known as biomimicry has been instituted and spread, in hopes that people might be able to live more sustainable lifestyles much in the way the rest of the organisms on Earth do. Janine Benyus stated that "unlike the Industrial Revolution, the Biomimicy Revolution introduces an era based not on what we can extract from nature, but on what we can learn from her."

Worm Adhesive? - The sandcastle worm makes a protective home out of beads of zirconium oxide in a lab. At the University of Utah, scientists have created a synthetic version of this glue for possible use in repairing fractured bones. Interested?


The Dye Solar Cell - Using a dye similar to the chlorophyll found in green leaves, the Dye Solar Cell (DSC) prototype by Dyesol departs from the more traditional silicon-based solar cells by working to mimic the photosynthetic processes of plants. Interested?


Lotus Inspired Paint? - Lotus—a plant with a unique hydrophobic microstructure that forces water droplets to bead and roll off its leaves—is being used as inspiration to to improve the lifespan of numerous hard-to-clean materials such as stucco, concrete and other exterior wall finishes. Interested?

The Biomimicry Institute has developed a useful resource for designers hoping to find inspiration through nature. AskNature.org is an open source project which hopes to organize biological literature by function.