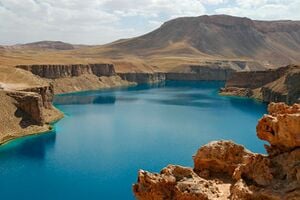 On April 22, 2009, Band-E-Amir was declared Afghanistan's first national park.[1] The 228-square-mile park features a chain of six lakes set in the Hindu Kush Mountains, and is one of the few travertine systems in the world.[2] Thousands of tourists and religious pilgrims flock to the remote area every year to see the vibrant blue lakes that are said to contain healing powers.[3] The natural dams are set in red limestone cliffs that were formed by calcium deposits.[1]

Located near the Bamiyan Valley in central Afghanistan, Band-E-Amir, which means "Commander's Dam" in Persian, contains "ibex (a species of wild goat) and urial (a type of wild sheep) along with wolves, foxes, smaller mammals and fish, and various bird species including the Afghan snow finch, which is believed to be the only bird found exclusively in Afghanistan" according to surveys conducted by the Wildlife Conservation Society.[4] The names of the six constituent lakes are as follows: Band-e Gholaman, Band-e Qambar, Band-e Haibat, Band-e Panir, Band-e Pudina, and Band-e Zulfiqar.[5]

The United States Agency for International Development provided much of the $1 million funding for the establishment of Band-e-Amir.[6] USAID, a government agency that provides foreign aid, created the park in hopes that it will contribute to the growth of the tourism industry in Bamiyan Province.[1] This will, in turn, create jobs for residents and reduce their dependence on subsistence farming, according to USAID.[1]

The Ministry of Agriculture, Irrigation and Livestock, the National Environmental Protection Agency, and the Band-e-Amir Protected Area Committee collectively manage the new park.[1] "At its core, Band-e-Amir is an Afghan initiative supported by the international community. It is a park created for Afghans, by Afghans, for the new Afghanistan," states Dr. Steven E. Sanderson, President and CEO of WCS.[4] To date Band-e-Amir remains Afghanistan's only national park.