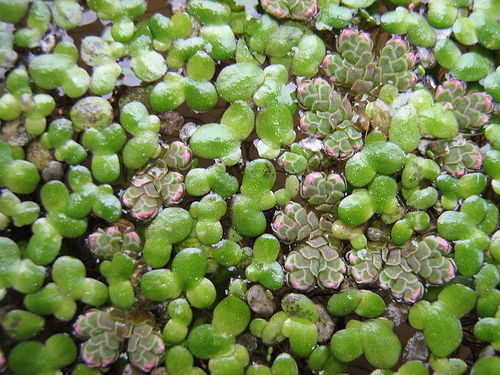 An example of co-culture of Azolla and duckweed : "Azolla filiculoides and L.minor" by Mygaia at English Wikipedia (T.M.McKenzie) 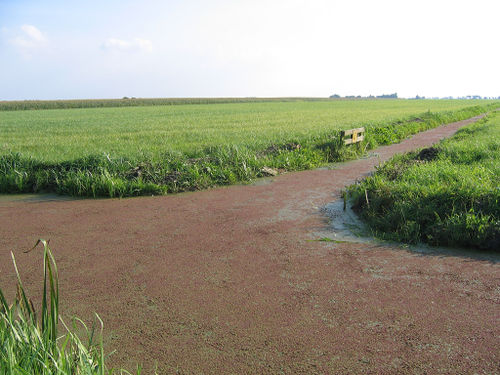 "Red duckweed? (it is Azolla!)" (photo by Flickr user Hans Splinter, taken in the Netherlands.)

"Azolla filiculoides" is a small fern that floats on water and is thus similar to the more familiar duckweed. It is native to North, Central and South America. Given appropriate nutrient and other conditions, Azolla can grow rapidly. It is rich in protein and minerals and can be used as animal fodder or for human consumption. While Azolla is not itself a nitrogen-fixing organism, it lives in symbiosis with certain cyanobacteria such as (Anabaena azollae) that fix nitrogen. Azolla may grow on somewhat brackish water, which expands the number of possible locations and uses.

As part of an integrated system[edit | edit source] 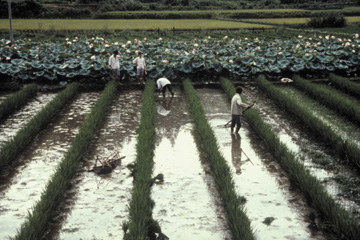 Co-cultivation of rice and azolla, which is a source of nitrogen fertilizer.

Azolla is often cultivated in wetland rice paddies so that chemical fertilizers are not needed (see link). The "Rice-Azolla-Fish" system-rice grown under the ridge culture in China, showing inter-rows being prepared for Azolla inoculation. 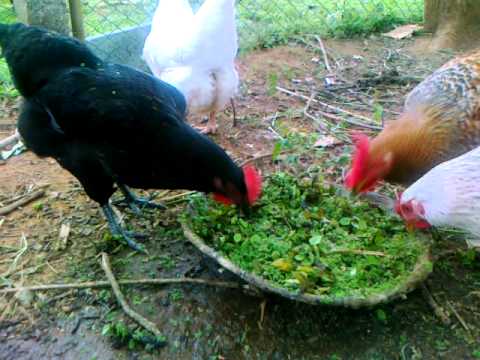 "Azolla as chicken food." (image from [https:// link deleted Youtube video]: "Azolla is an excellent food supplement for backyard poultry. It is easy to grow and practically free of cost. It helps keep feathers shiny and improves their digestion. It is cooling and keeps their bones strong. This is a nice backyard type of business activity to generate employment and income for small and marginal farmers, housewives, unemployed youth, bored teenagers, enterprising people as well as organic farmers, health fanatics etc." )

Besides biodiesel, other paths to bio-energy exist, such as Hydrothermal liquefaction for conversion to a crude-oil like liquid.

There has been long-standing hype about microalgae farming. In the 1950s, Chlorella was supposed to be the next thing that would solve all food and health problems. We have talked quite a bit here at OSE about Spirulina, but it requires highly alkaline water and needs specific chemical inputs ($) while Azolla grows on fish pond wastewater, compost leachate, silage leachate, etc.

Other microalgal organisms in this field besides Spirulina (which is the most widely cultivated one with an established market) are Chlorella (popular in Asia), Dunaliella (thrives in salty water), Haematococcus (for astaxanthin pigment), Schizochytrium (for DHA), Aphanizomenon, Botryococcus braunii (biofuel), Nannochloropsis (biofuel and omega-3). Being microalgae, these are all more difficult to harvest than larger organisms. Azolla is very easy to harvest. Azolla exists in symbiosis with the microalga Anabaena. So there we have it, our microalgae, just better.

(removed due to spam filter, will reinsert at a later date)