The problem of obtaining clean drinking water is very wide spread among developing nations. The atmosphere contains an abundant amount of water in the form of vapor, however it can be difficult and costly to harvest. Atmospheric water vapor processing (AWVP), is a new field of research that is developing ways to obtain that vapor. One such method is known as radiative cooling. A surface radiates heat away until it drops below the dewpoint, causing moisture to condense on the surface. This is a process that occurs naturally, producing dew. The proposal is to harvest the dew that naturally forms on rooftops as a source of potable water. Rooftops made out of galvinized iron, plastic, or glass, in reagions that experience the right weather conditions will naturally produce a significant amount of dew. Simply by collecting this dew, a family can gather up to 2L of dew water per dew night. This work offers a primer to the topic of AWVPs, and a description of how to build a dew collection rig. Unfortunately, dewfall is not currently recorded in most standard meteorological archives; so the next step for this project is to offer a reliable means of regional assessment that is accessible to a layman.

As the world’s population increases, fresh water supplies are being tapped out. Desalinization has become a necessary means of acquiring water; however current methods are usually quite costly and use fossil fuels. This is inappropriate for the developing world, where there is a serious need for increased fresh water availability. Atmospheric water vapor processing (AWVP) is a new and emerging technology in which the atmospheric water vapor is condensed and collected.[1][2][3]

There is approximately 4 g of water vapor per cubic metre of air in the earths atmosphere. This source of potable water is available virtually worldwide. AWVPs harvest this water, by condensing it from vapor to liquid.[4][5]

Currently, this article only considers AWVP approaches that use a cooled surface to condense water. The other common methods are using a controlled forced convection to concentrate the amount of vapor in the air, and chemical dessiants to cause it to condense.[5] 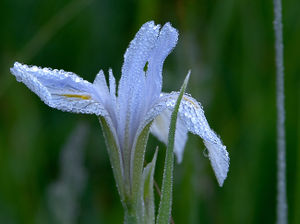 Interestingly, many desert and costal plants and animals depend on this source.[7] Naturally, the phenomenon of dew formation takes place due to night sky radiation cooling. On a clear night, heat energy is radiated away from the earth’s surface into the sky. As the surface temperature drops below the dew point, water vapor will condense into droplets. Dew is formed both from water vapor in the atmosphere in the form of dewfall, as well as from water in the soil in the form of dewrise. [8][9]


The amount of dewfall can be approximated from a complex turbulent fluid analysis; however it is far simpler to consider it as an energy balance problem.[9] Note that the process of condensation releases energy.

Furthermore, it follows that the maximum possible condensation rate for combined dewfall and dew-rise during nighttime is:[10][11][12][8]

Studies have demonstrated that the above modle can accurately and reliably predict dew rates.[8] Therefore, it is useful to quickly determine the seasonal dewfall of an area based on data from meteorological archives.
The maximum amount of dewfall possible on a given night is limited by the amount of radiative cooling possible, and is estimated to be approximately 1 mm. [11][13] In actuality, this number is usually much lower, ranging from 0.17 – 0.45 mm per night.[12]
Recent research has found materials that produce a higher dew yield. Materials that exhibit a large amount of radiative cooling will condense more dew, and hydrophylic materials will make dew collection easier. Specifically, TiO2 and BaSO4 microspheres embedded polyethlene resulted in a 20% increase of dew yield compared to Plexiglas.[14]
The angle of the surface is also important. The optimal angle has been determined through numerical models and experimental testing to be 30o from horizontal. A flatter surface will radiate more energy, however a steeper surface has improved dew collection characteristics.[14]
Unfortunately, bacterial concentrations in Dew water have been seen to exceed World Health Organization limits on various occasions. Therefore, it will require disinfectant to be considered potable.

Included in my Mech425 AT Project I created the page on a Dew collection roof retrofit.

Naturally forming dew is the most readily available way to obtain liquid water from the atmospheric vapor.
In certain climates, a significant amount of dew naturally forms on roofs. Just by collecting this dew, the average family sized roof can collect over 2L of potable water per night that dew forms.[1]