Aquaculture is the cultivation of marine or fresh water organisms in a controlled environment for scientific or business purposes.[1] A number of different kinds of marine life are cultivated all over the world, including oysters, clams, salmon, and trout. Aquaculture can be practiced as a low-technology extensive method to highly intensive system, with varying degrees of each.[1] Extensive methods do not involve a lot of change to the natural environment where the cultivation takes place and yield is usually low. On the other hand, intensive systems control many of the variables involved by cultivating the organisms in tanks or man-made ponds and this method usually produces a high yield. Aquaculture is practiced all over the world, and in Arcata, CA, a unique system was implemented. 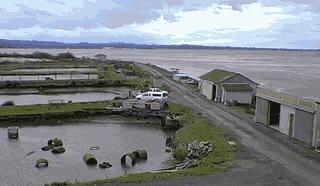 Dr. George Allen, a professor in the fisheries department at Cal Poly Humboldt, played a major role developing the unique aquaculture project in Arcata, CA. In the early 1960's Dr. Allen proposed to build the first recirculating salmonid hatchery in the United States. He went on to become a specialist in wastewater aquaculture and teamed closely with the community to develop the Arcata Wastewater Aquaculture Project. [2]

In 1971 the aquaculture ponds, as shown in Figure 1, were built in the north arm of Humboldt Bay. The salmonid hatchery was composed of different kinds of salmon, including Coho, Chinook, steelhead, and coastal cutthroat. The project demonstrated the raising of salmon and cutthroat trout fry in a mixture of municipal wastewater and bay water. In the past, wastewater had never been used for salmonids due to their sensitivity to ammonia. With the incorporation of seawater, the ammonia's effect on the salmon was buffered.[3] 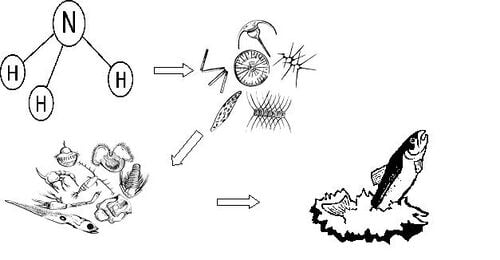 Seawater and wastewater each provided specific benefits to the fish's habitat. Seawater increased the dissolved oxygen levels and marine invertebrates for a source of food.[4] The wastewater also provided some essential benefits as well. Wastewater contains nutrients like phosphorus and nitrogen, which are food sources for phytoplankton. Phytoplankton is a food source for zooplankton and zooplankton is a food source for salmon. The ongoing relationship between these organisms, as shown in Figure 2, was important for the continuation of the project. The distinct and beneficial mixture of wastewater and seawater was used to rear the salmon for the next 30 years. 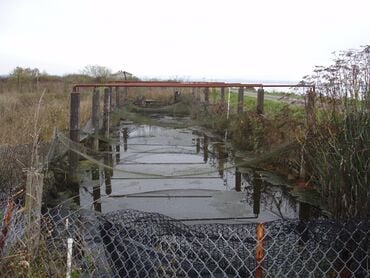 The success of the project can be understood by looking at how the salmon were reared. The salmon began their life cycle as unfertilized eggs. After the eggs were fertilized, they were maintained in an incubator until the yolk sac was consumed by newly formed alevin. The alevin became fry and they were raised in a summer ponds, as shown in Figure 3, with a combination of seawater and wastewater from the wastewater oxidation pond. 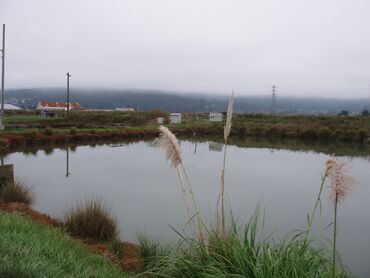 The summer pond was deeper and narrower than the other ponds, providing a cooler habitat and more dissolved oxygen.[5] The fry became smolts and then they were transferred to yearling ponds. The smolts were imprinted by the wastewater and seawater in the south pond, as shown in Figure 4, and then they were released in butchers slough through a pipe in the pond. The smolts eventually reached the ocean and grew into adults. When the adults returned, their sperm and eggs were collected and the life cycle was repeated.

Over the years, Professor Allen and students in the fisheries department at Cal Poly Humboldt conducted experiments at the facility. A number of experiments were used to fine tune the effectiveness of the project, including bird and mammal predation, closed system rearing, and number of other tests.[6] David Leonhardt's master thesis was among one of the experiments. In 1981, Mr. Leonhardt's experiments regarded the effectiveness of two interconnected waste water/sea water ponds for rearing salmon smolts. Fingerling Coho salmon were raised at the Arcata Aquaculture Facility (on wastewater) and the Cal Poly Humboldt Hatchery. David concluded the smolts raised at the Arcata Aquaculture Facility showed higher survival, better growth, higher percentage of smoltification, and a higher return rate than the salmon raised at the Cal Poly Humboldt hatchery.[3]

In the early 1980's Scott Johnson researched how supplemental feeds promoted rapid growth of juvenile salmonids reared in the ponds. Three different diets were used in the experiment, each having different ratios of the crustacean Daphnia magna and fillet carcasses of dover sole.[7]One diet consisted only of dover sole, the second of only Daphnia magna, and the third was a mixture of both. Mr. Johnson concluded that fish with the dover sole diet were larger than fish with the other diets and it was an effective supplemental diet to fish reared in the wastewater ponds.[7]

Both of these graduate students provided essential research to make the project more effective. Mr. Leonhardt's research was specifically important because it demonstrated how valid the aquaculture ponds were. His experiments proved the aquaculture ponds were more effective than the Cal Poly Humboldt hatchery. Mr. Johnson's research improved the size and health of the salmon through more effective diets. Mr. Leonhardt, Mr. Johnson, Dr. Allen, and many other graduate students played a major role in improving the efficiency of the project.

Success in the Project[edit | edit source]

Over the last 30 years many conclusions have been made, as many experiments and research have been conducted at the Arcata Aquaculture Facility. The facility has been recognized as an ancillary benefit for the city of Arcata and the surrounding areas. The facility has been a benefit by allowing the wastewater treatment plant in Arcata to discharge it's wastewater into the bay. The wastewater was important because it provided a source of feed for the salmonid smolts, decreasing the costs of the project. The aquaculture ponds have also helped increase return rates of the salmonids and trout. Being the first salmonid wastewater aquaculture facility in the country, the Arcata Wastewater Facility has been an example and reference for other cities and countries who want utilize this method of aquaculture.

Even though the project was a success, a number of events led to the termination of the project in January of 2008. In the late 1990's George Allen retired from the project and soon afterward fish where no longer reared at the facility. Dr. Karen Brenneman, a microbial ecologist, took his place as the wastewater utilization specialist. Through the 37 years of its existence, insufficient funds supported the wastewater aquaculture project and by the 1990's Arcata's Wastewater Treatment Center could no longer support the facility.

Although the project was terminated graduate research is still being conducted there. Graduate students at Cal Poly Humboldt are trying to optimize the treatment marshes by lowering the algae discharge. With the hard work of Cal Poly Humboldt graduate students, workers at the plant, and Dr. Allen's passion, the Arcata Aquaculture project has provided useful information to other aquaculture projects around the world.

Page data
Retrieved from "https://www.appropedia.org/w/index.php?title=Arcata_Marsh_wastewater_aquaculture&oldid=618011"
Cookies help us deliver our services. By using our services, you agree to our use of cookies.
Categories:
Maintenance categories:
Comments
Privacy policy · About Appropedia · Disclaimers · Mobile view · Content is available under CC-BY-SA-4.0 unless otherwise noted.
</html