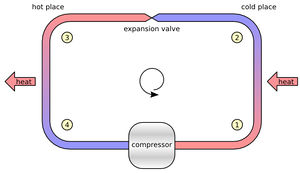 Air source heat pumps use a cycle of condensation and evaporation to transfer heat from the air to a desired location. The units are extremely efficient and produce very little emissions compared to their alternatives.[1] The system can be used in conjunction with other more traditional applications to provide a constant source of warm water and air.

2) Air to air heat pump: It produces heat by using fans to circulate outside air into your home, as to provide warmth.[2]

Air source heat pumps use the natural processes of evaporation and condensation to transfer thermal energy from one location to another. The system works by compressing a large volume of cool air, into a smaller volume to concentrate what heat is in the air.

The most common application involves an indoor and outdoor component. These two units are connected by a pair of pipes that carry a refrigerant fluid between the two major components. Inside each unit is a series of coils used to increase the refrigerants exposure to the air outside of the pipes. Located in between the two coils is a condenser. The unit can heat or cool a target, depending on which direction the coolant flows.[1]

Heating Mode: In heating mode, the external coils are exposed to warm outside air. The expo the refrigerant to evaporate. In the process of evaporating, some heat from the outside air is transferred to the liquid as it turns into gas. The gas passes through a compressor, the added pressure increase the amount of energy present before it passes on to the final stage. Once the gas enters the indoor coil it is allowed to expand and then condense back into a liquid, releasing the stored heat from outside.[4]

Cooling Mode: During the warmer months of the year, the cycle can be switched by changing the rotation of the flow through the system.[1] The coils inside a building pull heat from the warm air and through the same process of evaporation and condensation used in the heating mode, releases the heat to the outside air.

These are the two most fundamental facets of the system, as they drive the processes behind condensation and evaporation, respectively. The Compressor receives warm gas immediately after evaporation, and compresses the gas to store more of its energy while simultaneously releasing that thermal energy through the coils before hitting the expansion valve. The expansion valve allows the liquid that was just condensed and cooled from a gas to further lose some of the energy that was built up through the compression process. The liquid now has a large amount of potential energy before reentering the loop.

These two systems, in addition to the fans driving air over the coils, require very little electricity to operate and have very minor to no carbon emissions depending on models used.

Costs vary greatly based on installation type. While it is possible to construct a system yourself, it is advised to consult a contractor in order to determine proper size and location of the installation. Most installations of air source heat pumps are pre-built units by varying manufacturers and installation is handled by professionals to ensure the properly sized unit is selected. The calculations for proper location and size are complicated, and guessing the values should be avoided at all costs.

The cost of the unit itself is marginally higher then the normal air conditioners or heating units you would install to achieve the same effects. The main advantage is in the systems efficiency.[5] The energy costs are low because the unit does not need to burn any fuel to produce heat, it merely transfers heat from one location to another. The only electrical costs are associated with running the minor components involved in the phase changes of the refrigerant. This leads to similar heating or cooling effects, but at ¼ the cost of the fuel driven units.

Single System: A contained heat pump system, used in smaller rooms and rooms with large amounts of air flow, uses ducts to transport air into the unit where both coils are contained. The ducts are most often installed into a wall, allowing circulation of air. These systems are not as efficient as their larger counterparts, but conserve space and are much easier to install.[6]Split System: This is the most common application of air source heat pumps. Here, the coils are located in the actual locations they will draw heat from and pipes connect them to allow the refrigerant to transfer heat.

Due to the contained nature of the system, the end coils can be used to heat or cool any number of targets. Attached to a central air system, it can provide heating and cooling to an entire dwelling. When the coils are submerged in a water tank, they can be used to provide heated water, and in cold months additional features like a gas burner can be used to increase the water temperature above the units limitations.

For most application, a contractor should be contacted in order to ensure the quality of an installation. There are many ways to optimize the efficiency and capabilities of these units. As discussed earlier, the exact calculations are complicated and depend on many variables.[5]

However there are a few dimensions and characteristics that should remain universal when installing for water heating purposes:

Recently concerns have been raised, primarily in Europe, about the environmental impacts of air source heat pumps. The major issue lies with older units, and some unregulated manufacturers products, that contain refrigerants known to damage the environment. It is important to research the company a unit is being purchased from, to insure proper chemicals are used in the unit.[8]