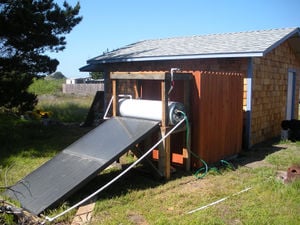 This spring 2011 semester, we constructed a passive thermosyphon solar shower system that utilizes natural temperature stratification to heat and store water without natural gas or electricity. Constructed at the Manila Eco-Hostel, this is an educational piece that seeks to inspire travelers of the area to recreate such a project in their own community.

Continuing on the design for the Samoa Hostel Thermosyphon Solar Shower System, designed by previous Engineering 215 students at Humboldt State University, we have constructed a solar shower at the Manila Eco Hostel. This shower uses a solar water heating panel to heat water for an outdoor, enclosed shower, providing visitors with an aesthetically pleasing, functioning way to shower sustainably.

The objective is to demonstrate, educate, and inspire an alternative way of heating water to visitors of the eco-hostel.

Generally there are two types of solar water heating: passive, and active[3] heating.

Active solar water heating systems use electricity to pump fluid from the panel to the storage tank.[7] The advantage of an active solar water heating system is that it has the capability to run at higher efficiency with the installation of a pump and controller. [8] These items allow the water to be circulated faster, allows for storage of the water tank lower than the panel, and also reduces the risks of overheating from increased circulation. There are three classifications for Active Solar Water Heating systems[9][10]:

Water is the medium which is heated up in a solar collector and is then actively pumped into an insulated storage tank. Concern for freezing should be considered in places with seasonal cold climates.

Anti-freeze circulates through the solar collector, collecting heat. The Anti-freeze is then circulated through a heat exchange device to transfer the heat to water without mixing. This system is a good alternative to the Direct System if freeing is a concern.

Similar to that of the Indirect system, except the Drain-back system allows for fluid to drain out of the solar collector when not in use, which allows for variation in design from the Indirect System. This is also a good candidate for cold weather climates.

The materials needed for this specific project are listed below. Included is the item name, the quantity needed, the cost per unit item, the cost at which we received the item (at the quantity needed), and an estimated retail cost should someone care to build a system modeled after this page. Several items have been donated and others have been previously obtained by another group working on this project. Items that are labeled NA are items that were not required for the testing phase we concluded with, but would be needed for a lasting final result. The variability for the final cost is due to the large range of price a solar water heating panel can have and it should be noted that our range is a modest one.

This section includes all possible aspects thought up by the group members for this project as well as the partners of the Manila eco-hostel. These criteria were chosen to evaluate the project based on ease of use, educational capacity, and aesthetic. These criteria helped us to determine how much time, money, and effort should be invested in each aspect of the system based on its importance to our clients.

This section will discuss how we selected the location for the solar shower, the general methods of our construction, and our sampling techniques.

Our first step for this project was to identify the location on site that would provide the best light, while also providing natural cover from public view. Using a solar pathfinder, we were able to chart out the amount of sun available for every month throughout the year. Since the most important months are during the summer when the Manila eco-hostel will expect the most visitors and the best sun exposure, we made sure that those month's hours of sunlight were unhindered by surrounding structures. There also needed to be enough space to lay the solar panel close to the shower enclosure while still facing south (since we are located in the northern hemisphere). The next condition was we required some amount of elevation relative to the rest of the area so that a grey water treatment system could be installed in the future and would have enough head.

The first step was to stake out the area that would be occupied by the shower and take measurements. The first digging we did was for the 4x4" (8ft long) pressure treated fence posts. We dug 5 holes (4 corner posts and a post for the door) 2ft deep. We then placed the posts in their holes and keeping them level (with a level) we added the Fencecrete and water. Letting it dry over night, we dug out the area for our concrete shower pad, digging 8" deep around the perimeter and 6" deep at the center so that the concrete would form a natural anchor. At the same time, we also trenched out where the waste water would exit the shower and made sure we would have enough head for ample draining (roughly a 1/4" drop per 1' length). Because we anticipated buying a cubic yard of concrete, we calculated the volume so that the amount would be sufficient. Before laying the concrete though, we first built the forms along the fence posts. Then we poured the concrete with the drain in place and smoothed it out with a gradient leading to the drain. The last step was treating and laying the redwood fence boards along parallel 4x2" pressure treated beams connected to the fence posts.

Using a thermometer, we measured the temperature of the water going into the system, the water leaving the panel, and the resulting water from the shower-head.

On a warm 21°C day with full sun in Manila, we managed to heat 15°C water to 47°C as measured from the output of the panel. After 10 minutes, the water coming from the shower head was 20°C, but did not heat significantly more after 50 minutes. Ideally, this system will have several hours to heat and allow for temperature stratification in the water heater tank and the tank will be better insulated then it was during our tests.

Over the summer of 2011, a cradle will be constructed at the crest of the north side of the shed roof to house and insulate an electric water heater tank. Also, the solar water heater panel will be fastened to the south side of the shed roof and the permanent plumbing will be installed. After that is done, the Samoa Hostel Truth Tank could be connected for natural grey water treatment and education on grey water treatment.

The final product of this project ultimately varied quiet a bit from our original design. Discrepancies between our team and other representatives of the eco-hostile ultimately were settled with this final result. The major compromise was between using a claw foot bathtub and laying down a concrete shower pad. Ultimately the concrete shower pad makes the shower more accessible and safe while the claw foot bathtub could have posed as a liability. Had we more time to work out the conflict of interest between "appropriateness" and safety, perhaps we could have still used the claw foot bathtub with a different design, but because time and money were a limiting factor, I think the decisions we made were optimal. Another discrepancy that I wish we could have dealt with sooner was between using a gas and electric tank. If we had more time, perhaps we could have acquired the proper tank and installed it so that the project could be left in a more complete stage. Luckily, an electric tank will be arriving soon and our project will be continued. What we have certainly learned through this experience is the importance of communication between all affiliates of a non-profit project such as this.