The Roto-Robo-SuGo-Super Table (RS Table) was designed for Zane Middle School and was constructed by Humboldt State University's Engineering 215 Introduction to Design Class, Project team GERL. This design is meant to serve the purpose of providing a competition table for Lego EV3 Mindstorm sumo robotics competitions. The RS Table is a 4' by 8' table which folds into a 4' by 4' box and rotates in order to be portable, incorporating a whiteboard surfacing so that students can customize their competition course. The RS Table features a locking mechanism integrated into the leg system which uses a circular "rod in hole" design allowing for students or teachers to lock the table into its large state at several degrees of inclination. With the main goals of safety and durability in mind, this table attempts to maximize the ability of the students to create their own competition environment or allow their teacher to assign interesting day-to-day tasks or activities for their students to accomplish.

HSU's Spring 2016 Engineering 215, Introduction to Design, was commissioned by Zane Middle School to design and implement a table for the battling of EV3 Lego Mindstorm sumo robots. This table will drastically reduce the time and complexity required to setup an EV3 regulation competition table. Hopefully the ability to draw tracks and vary incline will make for an interesting change to the robotic battles fought between middle-schoolers.

The RS Table is a 4' x 8' table which stands approximately 3.5' off the ground. It features 3.5" rails and rests on a rolling steel frame. The tabletop has the capacity to vary its level of inclination, as well as offers a surface upon which dry erase markers can write. These features allow the RS Table to act as a customizable course wherein students can make complex, uphill, or downhill paths when utilizing their Lego robots. It also has the convenience of being folded up and acting as a low storage shelf and whiteboard, so even when not in use it can still be useful.

Ideally there will be little to no maintenance required for the RS table, however should the tabletop be damaged it is easily repairable with a quick-drying Spackle and a layer of whiteboard paint. Should the frame or lock become damage parts and repairs will vary but each piece should be interchangeable with one of equivalent size and properties.

It should be noted that any and all rotation of the RS table should be done in the presence and with the hands of an adult. Additionally in order to unfold the table one must simply follow these steps in reverse. Operate at your own risk.

This table represents a rough estimate of the costs associated with the production of the Roto-Robo-Sugo-Super Table.

This pie chart represents a rough estimate of the hours spent designing and producing the RS Table. 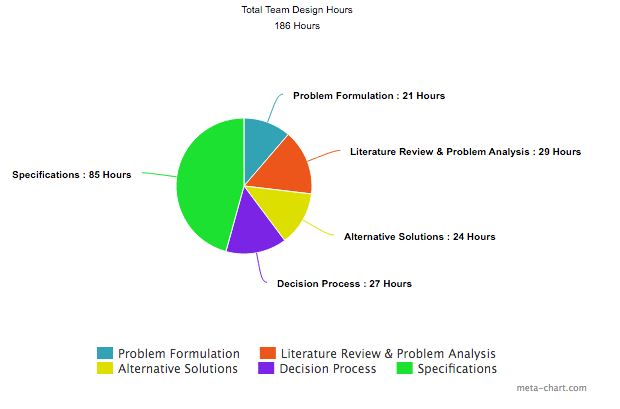 The RS Table was designed to support the weight of several lego robots and potentially ramps placed around it, all at one time. As such a stress test implemented by placing 15lb in varying locations around the tabletop while extended and locked out should be more than enough to ensure that during proper day-to-day as intended use, the RS Table will not collapse under the weight of its load.

The RS Table was designed to freely rotate. As such it is vital to have an even balance about its rotational axis. In its unfolded form the RS Table does not rotate indicating that it is roughly balanced about the axle.

1a. Cut and weld preexisting frame base (portion with casters) to desired size (match width to desired width of table with space for locking mechanism and leeway for rotation).

1b. Assemble frame vertically (bolt together preexisting tv frame sections welding in scrap metal to match dimensions of base as necessary).

1c. Mount locking disc to crossbar (our mechanism for locking our table into a horizontal or variable inclination was a 3d-printed disc mounted to the table around the pipe with several holes drilled into it so that it rotates around the bar and is lockable whenever two of the holes are level).

1d. Mount Axel of rotation/A-frame crossbar (weld pipe to frame, we used a raised metal segment which we bolted to the tv frame).

2b. Hinge plywood at desired locations (we used 2 door hinges rated to hold 100lb loads on each cut of the plywood anchored by 0.5" wood screws).

3a. Stabilize tabletop over frame (we used 2' x 4' beams to hold the table in place over the pipe/axle).

3b. Attach Tabletop to frame (we used pipe brackets to fit our tabletop to our pipe crossbar snugly anchored by 0.5" wood screws).

4a. Add Telescoping Bar to underside of table to cause hinged sections to lockout in flat manner (we used board brackets to mount 1' sections of 2" x 4" flat to the underside of the table). Boards slide to lock tabletop in a plane.

4b. Make sure to adjust table to zero inclination using a level. Tabletop will be difficult to adjust later (we had issues with tabletop alignment with our frame and ended up having to cut both down to rotate fully).

5. Add Rail to top of Table to meet competition standard

6. Apply Whiteboard Surface (we recommend the use of whiteboard paint)

6a. Prep surface (we originally attempted to use whiteboard sheets and gorilla glue to affix our surface, removal of these things lead to many hours of scraping with an exacto knife and sanding to remove remaining glue and adhesive).

7b. Add fixing connector (we used a double ended gatelatch to connect the two eyehooks so that when folded the end-wings were still connected).

8a. Mount Handle to locking mechanism (we glued metal rods into a 3d printed plastic handle, metal rods are placed such that they go through the frame and into holes present in plastic disc [see step 1c] pinning disc [and consequentially table] in place at desired inclination)

8b. Place locking mechanism through holes drilled in frame and disc (this prevents the frame from rotating in relation to the disc [and tabletop]) (we drilled holes at 0, 15, and 90 degrees of inclination).

9a. Cut plywood siding to fit into metal frame across the base and walls.

9b. Bolt wood into place (we drilled through the frame and board in an attempt to bolt one to the other). Ideally wood siding should be square to the base and therefor frame and floor.

The RS Table fulfilled the criteria and needs of the client representative. The RS table is durable enough to last with constant use in a classroom environment and safe as long as operated in the hands of an able-bodied adult. It also is innovative in that it meets the competition requirements and presents an additional option of utility with varied inclination and map customization via dry erase marker. The RS table had several flaws all addressable in future builds.

Ideally in future designs based on this table, we would improve the portability, reduce cost, and improve the general build process. At the end of our initial construction, though we had created a relatively large and durable product which met all of our goals, we realized that it was heavier than we had hoped.

Though the table is still portable enough to be wheeled around a classroom as our client asked, it wouldn't be a task suited for students (reducing it's availability consequentially). Hopefully in future iterations of this design we will be able to reduce total weight by using a lighter tabletop surface and perhaps a more lightweight frame (each of these is accomplish able but beyond our budget).

The RS Table did take us slightly beyond our initial cost limit of 300$, in a large part because initially we thought that we could use whiteboard sheets and adhesive to create our final surface only to find issues with the adhesives and air bubbles. White board paint will be the only surface next time reducing the cost from $314.80 to $279.17.

There are several design issues that we would also seek to address in future iterations. One of these includes the misalignment of the tabletop on the frame (this caused us to need to cut down both the table and the frame in order to ensure free rotation). Another issue is the tabletop being overweight which caused the tabletop to have disjoint sections and gaps when folded out (does not impede function but are undesirable and could potentially worsen with time). The folding mechanism could be reworked simply swapping the door for piano hinges allowing for a more even fold. Additionally the method by which the wings lock out could be improved via something like deadbolts or a locking truss system similar to fold out plastic tables. As mentioned above, a more lightweight tabletop perhaps machined from plastic or cardboard would improve portability and usability, this would also allow the frame to be more lightweight and ideally smaller as well. Finally, we would make the rotating locking mechanism (pins into disc) have the holes for the pins to thread and the pins themselves be spaced at a larger radius from the center of the pipe (about which the disc is mounted). This should allow for more varied inclination as there will be less of an issue with the disc-holes overlapping preventing the locking pins from sitting securely. Hopefully all of these modifications could be made without significant sacrifices in cost or structural integrity.