These tutorials were created so that students at Zane Middle School have educational activities during the COVID-19 lock-downs. These crafts are easy and kid-friendly enough for middle schoolers to be engaged and entertained. These videos are good for the lock-downs because they require little to no money to complete and are made of things that are found around the house, or cheaply at hardware/craft stores. Crafting and being creative is a good way to cope with the uncertainness that the COVID-19 epidemic created. All of the videos are very accessible to anybody who would be interested in doing them, and are uploaded to the public youtube channel "The Cowboys of the Season" , as shown below. 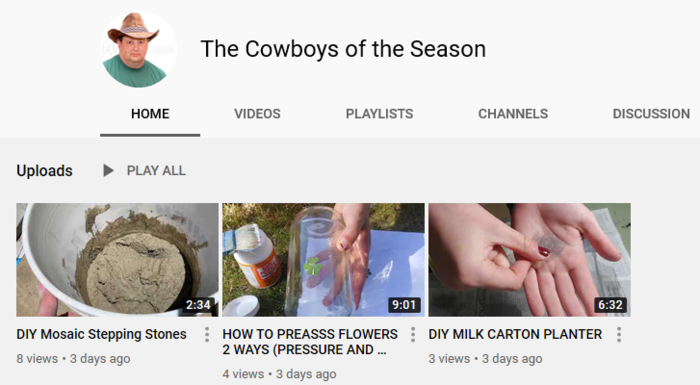 Overview of The Cowboys of the Season's youtube page where the DIY videos can be found.The youtube channel can be accessed here.

Mosaic steps were prototyped for the color and design that would be made in the video. This was done to ensure that the video is more interesting and relevant to Zane Middle School. 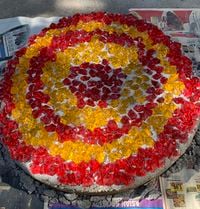 One of the mosaic step tiles made in the tutorial video.

The first prototype of the Milk Carton Planter Box was made of a soda can cut to have an open top. This design was determined not suitable for kids due to the can opening’s sharp edges and the risk of cutting oneself in the construction process. The milk carton was chosen as an easier and safer alternative. Milk cartons are a good choice because most families have them in their houses, so they would not have to go to a store or spend money to complete this project. The first full prototype of this project was uploaded on Youtube, and after a week a revised version was uploaded, which included information about painting the milk carton. This information was collected through trials on how different paints stick to the waxy surface of the carton, as seen in the photo below. 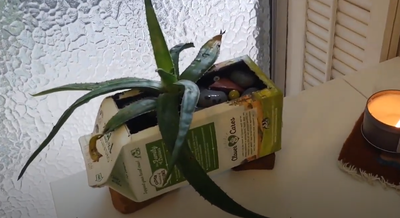 The final result of the milk carton planter. 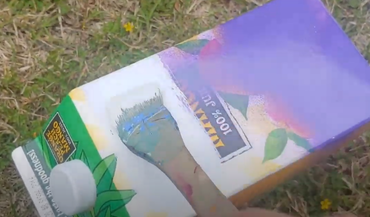 The bulk of prototyping for flower pressing involved an iron. There were three iron flower pressing sessions, each with mixed results. After the first attempt it became clear that pressing at lower temperatures is ineffective, and that it is best to use a medium temperature. Furthermore, it was discovered that ironing generally works with leaves that have thick and waxy cuticles. Flowers, when pressed with a hot iron, wilt and become very soft and damp, as shown below. 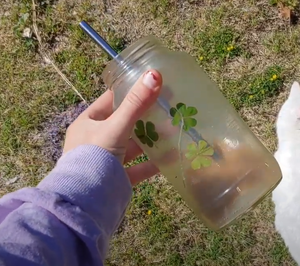 Final product of the pressed flower.

A second version of the flower pressing video was uploaded that corrected information about the durability of the Mod Podge in a dishwasher. When experiencing large variations in temperatures, Mod Podge solidifies and softens. When put in a dishwasher Mod Podge unbinds completely, making it unideal for use on food containers. 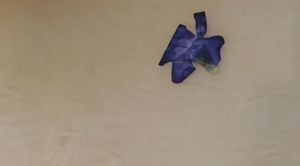 The effect of the dishwasher on Mod Podge.

The following table is the costs required to make all of the activities done within the DIY videos.