Energetech, based out of Australia, has designed an offshore oscillating water column(OWC). A single device was first installed at Port Kembla, Australia in 2005. In 2004 a cost assessment for a pilot project and commercial wave energy plant in San Francisco Bay was done by EPRI(Electric Power Research Institute Inc.) and prepared by Mirko Previsic. The pilot project would take place 13km off the San Francisco Bay, in the Monterey Bay National Marine Sanctuary exclusion zone where the water depth is approximatly 15m. The pilot was proposed at this location due to a preexisting sewer outfall pipe extending 6km offshore, which would lower the cost of bringing the power back to shore becuase the cables would not need as many new easements. The commercial project was proposed 23km offshore where the water depth is about 50m, also to connect to the sewer outfall pipe.

The OWC outputs energy by utilizing air compression and expansion, with the waves acting as a piston, to propel a Dennis Auld variable pitch turbine.This turbine allows an effcient direction-change in air flow. The turbine is connected to a generator to output the electricity and connects to the sub sea junction box through riser cables, and to the onshore grid through sub sea cables. 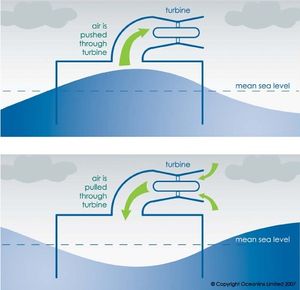 Each device weighs approximarely 485 tons, has a width of 36 meters and a length of 24.5 meters.The device produces a noise level of about 73 decibles, and can produce an average of 20kW/m, in water depths of 52 meters(commercial), and 11.2kW/m at depths of 15 meters(pilot). The average yearly output of one device is 1,131MW.

The Pilot project would consist of a single OWC device, whereas the Commercial site would consist of 4 clusters with 38 devices in each cluster, a total of 152 devices. Each of these devices would be 35m apart from eachother, therefore the entire site would extend to 10.6km total.

To determine the feasibility of a project like this, the best comparison is wind power because of the similar effciency in the turbines. Wave power has a higher operation and maintenece cost due to ocean transportation as well as material degradation from ocean waters. On the other hand the energy from wave power is more predicable and it provides consistent energy production. Overall what is lacking from wave power is an incentive to invest due to unpredictability of actual cost and benefits and the wide variety of wave energy devices under research.