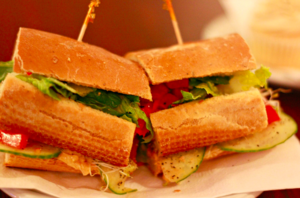 Picnic books abound with recipes that contain meat, eggs and creamy sauces. For the vegan, this can be fairly daunting and definitely inedible. Fortunately, there are plenty of tasty vegan options for that fabulous vegan picnic.

Consider whether the picnic is wholly vegan or just for you or a few vegans along with others eating meat and eggs. This will determine how much vegan food is required and whether or not the vegan food will also appeal enough to the meat-eaters that they'll eat your share before you've even reached it (it does happen, so much for not liking vegan pickings, they're usually the tastiest morsels everyone zooms in on).

Keep everything as simple as possible; a picnic deserves to be fun, and too much preparation and toting things can make it seem like a chore, especially for the persons preparing it all.

Here is a basic checklist of the things you'll need, as well as the food:

Vegan fare for a picnic is easy once you have an idea of the sorts of things that work well. Here is a list of suggestions: