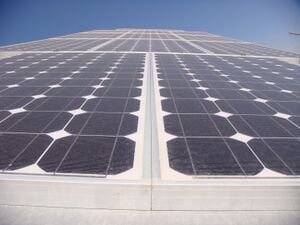 Solar panel like the ones used on Paul VI Hall

"The Vatican" has recently completed a solar array or garden upon the 6,000 square yard Paul VI Hall and teamed with a Hungarian carbon offset start-up called Klimafa, making Vatican City the first carbon-neutral state of the world.[1]The reasoning behind Catholic support of solar photovoltaic technology is primarily based on environmental stewardship.[2]

The Vatican has been the smallest city-state in the world since it gained that status in 1929. The Vatican was signed over from the Kingdom of Italy to The Holy See, an organization that exercises Episcopal jurisdiction over the Catholic Church. The city is built in Rome over the resting place of St. Peter and takes up about 110 walled off acres with 11 Vatican museums, the Vatican Gardens and the most famous and beautiful chapels in the world.[3]

There are three different types of solar energy, the Vatican solar array is composed of the last type :

Passive solar power is the heat from the sun that a building naturally captures. It is the most cost effective way for buildings to harness the sun's energy but takes a lot of planning on both the engineers and architects part so that as much heat is captured by the building as possible.

Photovoltaic cells are what make up a typical solar panel. It uses these panels to convert the sun's rays into electricity. There is continuing research happening making these more cost effective and efficient. These have a wide variety of uses and these are dependable and easy to maintain, they are the first choice of folks living off the grid.[4]The photovoltaic cells on the Vatican roof should only need minimal maintenance over the next 25 years.[5] 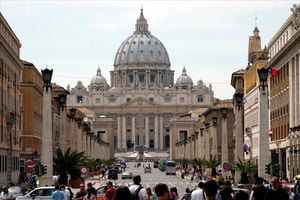 Both Pope John Paul II and Pope Benedict XVI have put much emphasis on the importance of sustaining and improving the environment, with this in mind in 2007 Pier Carlo Cuscianna, the head of the Vatican's department of technical services started to formulate the plans for the solar array. Paul VI Hall was chosen because of it's football field size roof with a lot of light exposure all day, the fact that it it is a large auditorium that uses a lot of lights, air conditioning and heating, and because the roof also needed repairs. There have also been green Vatican projects in the past, like when St. Peter's Basilica's lighting was switched entirely to be low-impact, the electrical vehicle recharging station and the switch to a more eco-friendly Pope-mobile. Though Cusianna won't reveal how much the grand total for the project is, it is only the beginning, he already has his eyes set on other buildings that can effectively harness the power of the sun.[6]Though it is estimated that the panels cost around $1.5 million, they were donated to the Vatican through a partnership with German company SolarWorld.[7]In total the array will generate about 100 megawatts, enough energy for 40,000 households, way more than than the Vatican actually needs. With the panels up and running the hall that it sits on will be powered first, then the surrounding buildings of the Vatican then all excess power is sold to Italy for a revenue.[8]

Klimfa is a Hungarian carbon offset company who's parent company, Planktos International, is based out of San Fransisco. Klimfa manages a large portion of an area in Hungary that once was a lush forest, when someone donates to Klimfa trees are planted and protected there. So when people pay Klimfa they are buying carbon offset but are basically paying for new trees to be planted and protected. Just recently parents covered their newborn's entire life worth of carbon through a Klimfa donation, trees will be planted every week of the baby's life to offset the carbon she will produce.[9]In the Vatican's case, Kilmfa is making a 37-acre Vatican Climate Forest in the Tiszakeszi forest in Northeast Hungary to completely offset a years worth of the Vatican's carbon emissions.[10]

Page data
Retrieved from "https://www.appropedia.org/w/index.php?title=Vatican_Solar_Array&oldid=651880"
Cookies help us deliver our services. By using our services, you agree to our use of cookies.
Category:
About Appropedia · Policies · Contact · Content is available under CC-BY-SA-4.0 unless otherwise noted.