I am a first-year student at Michigan Technological University, in the Electrical and Computer Engineering Department. I was enrolled in an Honors/AP magnet school through high school, where I learned about the scientific process, academic research, experimental research, advanced mathematics, computer science, and the like. In my lifetime, I hope to pursue research related to my interests in college, pursue Masters education and an MBA, and at one point become an entrepreneur.

My research interests for college include:

In High School, I was enrolled in the Macomb Academy of Arts and Sciences, where I took Honors Math, Science, and Computer Science courses. I have a trimester of Chemistry Lab assistant experience, as well as two years of chemistry lab work for class.

Tenebrio Molitor were the test subjects for the research I participated in for the 2013-2014 School year. 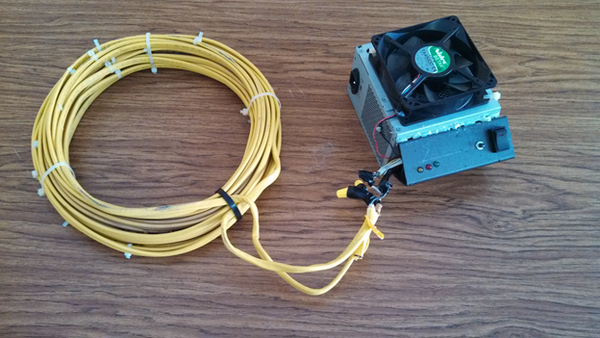 An image of the field generator for my research for the 2013-2014 School year.

While in the Macomb Academy of Arts and Sciences, students were required to work on year-long research projects.

These projects were structured similar to college undergraduate research, where groups of 3-4 students choose a scientific hypothesis that can be quantifiably tested, proceeding with 10 weeks of data collection, a paper on the scientific background of the project, statistical analysis on the data collected (including mean/median/mode, standard deviation, normal distribution curves, ANOVA testing, and t-testing on each gradient / sets of gradients), a formal research paper structured similar to professional papers, and finally, a 10-15 minute PowerPoint presentation on our research. This occurred every year of a student's education at MA2S.

During the 4 years I attended, I worked on the following Projects:

The Documents created for Project #4 are listed below.

NOTE: I do not take full ownership of the files listed above, as I was in a group of 4 students including myself.

A first team has 6 weeks to build a robot from scratch from game documentation released on the first day of the season, usually on the first weekend of January each year. Through this program, I learned the LabVIEW programming language, control system application, wiring, soldering, professional presentation and public speaking abilities, teaching skills, and leadership experience. I was the 'Electrical Captain' for two years, teaching new students how to program, wire, and control the robot built every year. I also initiated the task of creating and hosting off-season electrical / controls lessons, and taught these courses twice.

The Michigan Tech Honors Institute is a foundation for highly motivated students. Each student is required to complete 3 projects of some variation that are 20-25 hours of work each before they graduate, complete an application to a nationally competitive scholarship, and maintain a 3.5 GPA.

I am involved with the American Chemical Society at Michigan Tech, where we do various activities and community outreach to create an interest in chemistry.

At Laminair Systems, I worked on manufacturing, programming, and wiring pre-paint finishing systems for automobile plants to ensure the frames are clean before painting.

With a group, I programmed, designed, and published a professional website for a local haunted house business using HTML, CSS, and JQuery scripting.

I am currently working on a project that entails creating an easy-to-use 3D printer specifically for the Honors Institute with Mike Vennard II. We plan to use the standard Delta 3D printer design, but modify it and add capabilities to it for more uses. Some ideas include adding more extrusion heads, streamlining the CAD to G-code process, more advanced control boards, and improved stepper motors.