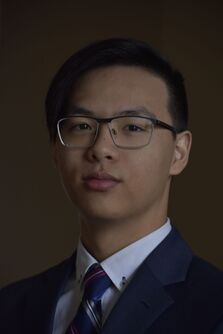 Hi! My name is Victor and I am a third year student currently studying Honors Business Administration at Ivey Business School. I also plan on completing a dual degree with Mechatronic Systems Engineering which I studied during my first two years at Western University.

Working with Dr. Joshua Pearce at Western University to build a high-temp conveyor belt printer (HighT Belty) for the FAST Lab. The main goal of this printer is to print large engineering plastics parts at a low cost. Check out the GitHub Repo here . 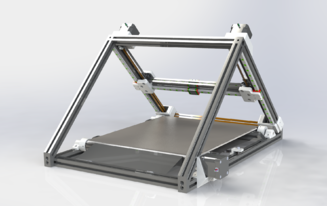 Belt printers are not so out of the ordinary any more these days, but they are still quite costly and unreliable in terms of print quality. I wanted to change this. During summer of 2021, I started a project to design a belt printer that would help me towards this goal, Belty. It was my first time designing a 3d-printer, and there were many elements in the printer that I was quite unsure about.

I started by looking at CoreXY kinematics printers (VORON, Vez3D, etc.), which all had amazing printing quality and speed. I was not aiming for a super high speed but these printers can perform up for 1000mm/s for ABS printing (VORON 0 1000mm/s). Considering all factors, there was no reason not to go with a CoreXY, since the print bed has to be stationary and the material cost will be the same.

The printer has just been finished and is still in testing stage, here is a video of it printing (under-extruded due to user error). Follow the Github here for any updates on firmware and to-do's. 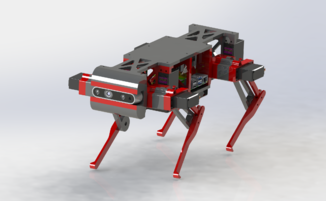 Goal of this project was to improve my programming (Python) skills by using PyBullet to train the robot using RL. The mechanical design of the robot was inspired by a Stanford robot called Pupper. My version of the robot uses cheaper servos and it has a Intel RealSense camera to help detect objects or interact with humans.

One of the biggest design objective for Doggy was to reduce the weight. For the Stanford Pupper, they had chose to use carbon fiber, which is expensive and hard to manufacture. The use of carbon fiber allowed the robot to be very light (around 1kg), which then enabled the hobby servos to perform well and have smooth motion. For Doggy, carbon fiber was out of the question due to budget, so it was crucial to design with the lightest parts possible.

For electronics, a Raspberry Pi was used as the brain of doggy, it is powered by a two cell lithium polymer battery which also powers the servos.

Currently, Doggy is under the care of my friend, Jason Liu, who contributed greatly towards the project as well. Jason is looking into the control part of the robot and exploring RL with it using PyTorch and IsaacGym. 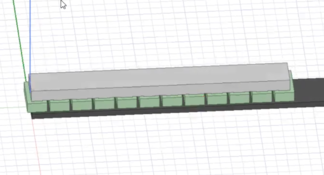 We are designing a linear induction motor (LIM) for the Hyperloop vehicle. The current plan is a double-sided LIM with 4 poles, and a total of 12 phases (3 per pole). Phases of each pole is wired in star configuration to maximize torque.

As of now, we are still learning to work with ANSYS Maxwell to simulate electromagnetic properties of the LIM. The plan is to prototype the LIM this year and test it on a rotating track which is available at Western. We are also considering the use of Litz wire to reduce eddy currents and maximize efficiency.

We also plan on entering the Canadian Hyperloop Conference to show our LIM design and progress. 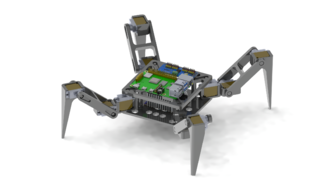 Spidey was a project to get me started in robotics, it is a 12DOF spider-like robot (half the legs of a spider). The design was simple, the legs acted as links and the servos were joints. It is fully 3d-printed and originally featured a ESP32. However, for ease of control and simulation, the ESP32 was swapped out for a Raspberry Pi. By using the Raspberry Pi, it was easier to go from sim2real and write the inverse kinematics for the robot (done by Jason Liu).

This is a cycloidal drive originally designed by Paul Gould . My friend and I redesigned it in SOLIDWORKS and have been tweaking it to make it suitable for use in a robotic arm. The first prototype has been tested to be backdrivable. In the future, we hope to design a better and more robust drive to use for robotics applications.

There are some other topics related to 3d-printing that I am interested in, specifically 5-axis 3d-printing, 3d-printing in aerospace, and aluminum CNC.

CNC machines have had 5 axes (additional 2 axes which are rotations on x and y) for a long time now. This way of production reduces the setup time and reduces errors. With 3d-printing, there are even more benefits. By adding additional axes, we can use less material (support), make stronger parts, and create better surface finishes. There are already some 5-axis 3d-printing machines, but most of them keep their slicer/software closed-source. This has been a huge hindrance for hobbyists trying to build 5-axis printers. Some have found alternatives to just use CNC machine software which has 5-axis capabilities. Thus, there is a hole to be filled for open-source 5-axis 3d-printing.

AM in Aerospace Applications[edit | edit source]

I was really inspired by what Relativity Space is doing with metal 3d-printing, it is crazy to think that they can 1. 3d-print rockets, 2. predict deformation in simulation and correct it using software, 3. reduce part number by 100x.

I am interested in starting a project to build a customer personal CNC router. This is going to be used for mainly cutting soft aluminum and it will help me to do more mechanical projects such as the cycloidal drive. I chose to make a router instead of a mill is because of cost and the ease of manufacturing. I will be able to use 3d-printed parts to begin with and then it can machine its own parts in aluminum (or parts for a knee mill). Based on my experience in designing and 3d-printing, it shouldn't be too hard to design and make with enough research.