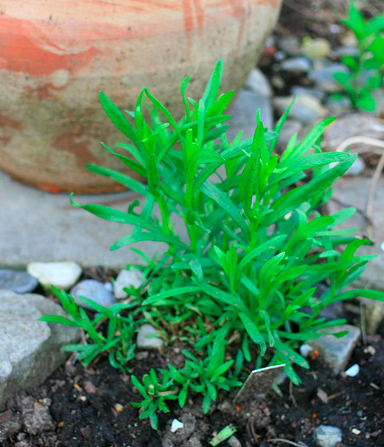 Tarragon is a perennial herb. It is much valued as a culinary flavour.

Dracunculus refers to "little dragon", perhaps a reference to its leaves looking like flames from a dragon's mouth, or the serpentine shape of its roots or its fiery flavour.

French tarragon is bushy and aromatic. It has dark green leaves with a fine shape. The leaves are very small, with pointed tips. French tarragon has flowers that are white to green, of a small size. These flowers will only appear in a warm climate environment. It grows to about 90cm (3 feet) in height.

Russian tarragon has coarser leaves, still a dark green and with a long and narrow shape. The little flowers are yellow, appearing in sprays in summertime. It grows to about 1.2 metres (4 feet) in height.

Decide whether you'll grow French or Russian tarragon. French tarragon has a better flavour of the two and its leaves are more tender.

Choose a sunny and dry area, although tarragon can handle partial shade. French tarragon doesn't grow well in humid conditions. Russian tarragon is fully hardy and will tolerate many conditions.

Choose seedlings or cuttings or divisions. Only Russian tarragon produces viable seed, so seed can be used for this variety but not for French tarragon.

Tarragon can be grown in containers, if preferred. Pot-grown tarragon needs a large container to cope with the runners it produces. Water well during the daytime to prevent wet roots.

Tarragon is a good companion plant for many other plants.

Remove flowers in summer to encourage growth of more leaves and to tidy the plants.

Replant new French tarragon cuttings or divisions every three years, as the flavour isn't as good after this time.

French tarragon can experience problems with rust; check under the leaves for small rust spots. If you find them, dig the plant out. Remove all the affected leaves and discard of them. Wash the roots carefully, then return the plant to a new container with completely new soil.

Pick tarragon leaves throughout the growing season for use as fresh leaves. For making tarragon vinegar, harvest early in the season, when the leaves are the most tender.

Tarragon leaves are used to flavour many savoury dishes, especially French dishes. Select the leaves prior to or just as flowers appear, as this is when they're at their most flavourful.

The leaves can be used fresh or dried. However, note that dried tarragon quickly loses its flavour. They go well with fish and poultry dishes and are often added to vinegar, sauces and dressings. Try with mushrooms and in omelettes (it is found as one of the herbs in the fines herbes mixture used for omelettes).

Typical sauces made with tarragon include hollandaise, béarnaise and tartare sauces.

Russian tarragon has a coarser and more pungent flavour than that of French tarragon.

Beware! Adding too much tarragon to a dish will produce an overpowering, tart flavour that isn't to many people's liking. Be sparing, not liberal, with its use.

Page data
Retrieved from "https://www.appropedia.org/w/index.php?title=Tarragon&oldid=597598"
Cookies help us deliver our services. By using our services, you agree to our use of cookies.
Category:
About Appropedia · Policies · Contact · Content is available under CC-BY-SA-4.0 unless otherwise noted.