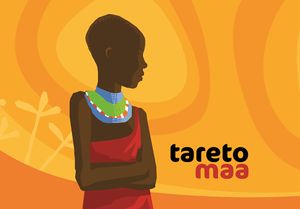 Tareto Maa (meaning "Help for the Maasai") is a grassroots nonprofit in Kenya, East Africa, whose objective is to empower the local community while eradicating the tradition of female genital mutilation (FGM) and child marriages within the Maasai people. The organization is located in Shartuka/Kilgoris, Transmara District.

Tareto Maa was founded as a community-based project in April 2009 by Gladys Naing'olai Kiranto whose aim was to support the children of her community and especially to spare girls from FGM which she had undergone herself. Together with members of the local congregation Gladys Kiranto started to shelter orphans as well as girls who had to run away from home to escape FGM and forced marriage. Furthermore Tareto Maa runs public information campaigns on FGM, child health and child rights, and provides comprehensive support to the local community in terms of education, food supply and infrastructure.

Tareto Maa WIKI represents an important step in sharing the experience gained from the completed projects at Tareto Maa. We hope this work can benefit others, encourage dialogue and communication about what we do and help us develop new ideas for the future. 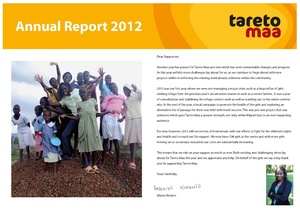 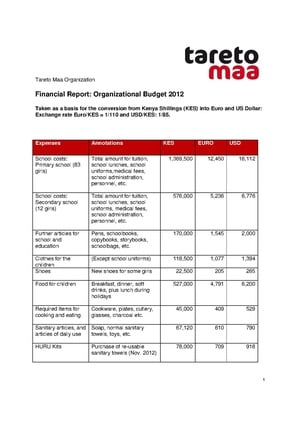 Tareto Maa is managed on site by local members of the Kilgoris community. The children have elected representatives who participate actively in the decisions that are taken. Tareto Maa receives a broad support from many countries abroad. 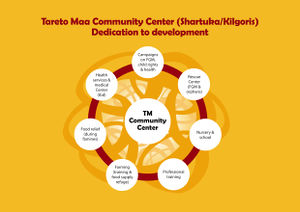 The Tareto Maa Refuge is a basic pillar for our fight against FGM, as it makes the project visible and "real" for the community – as people put it: "You are not only talking, you are really doing something".

If a girl is in danger, she can ask Tareto Maa for help. The local pastor (who is a member of Tareto Maa) and other team members will try to convince the parents not to have the girl cut. In Maasai culture it is mainly the father who decides about this issue. However, if a father / a family refuses and casts out their daughter, Tareto Maa admits her to the refuge.

In close cooperation with other local stakeholders, Tareto Maa runs behaviour change campaigns. Tareto Maa connects the issue of FGM and early enforced marriage to the wider topics of human (and women's) rights, to sexual and reproductive health (incl. HIV/AIDS) and also explicitly addresses associated financial issues (like bride price and the worth of investing in education). Team members attend community assemblies and visit schools, and they organize seminars, community events and alternative rites of passage. An initial community decision to abandon FGM was reached in December 2012. Now the task is to handle the opponent's potential reactions, to strengthen the community's engagement and to spread the work to other communities as well.

Background information and data: In the Transmara District live around 200,000 people, most of them Maasai. A survey on FGM was conducted in this district by the Kenyan Ministry of Health in the year 2000. According to this survey the FGM prevalence rate was 74%. The prevalence among the mothers (more than 99%) was twice as high as among girls (48%). However, this official data is not up-to-date. Based on the personal talks which we have with community members, we estimate that today in the Kilgoris region around 80% of the Christian families and around 40% of the Muslim families do not force their daughters to become circumcised anymore. In our personal talks we have observed that many parents are rethinking their beliefs, and that those who still practice FGM are facing an increasing pressure from the community. There is a momentum of change, and Tareto Maa is an important part of it. 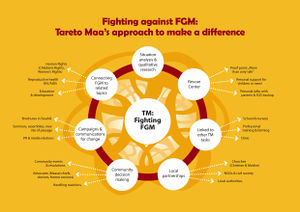 Tareto Maa opened the Naitawang Riverside Academy so that both girls from the refuge and children (girls and boys) outside of the refuge could benefit from a better education on-site. Furthermore the school serves financial purposes: the parents who send their children to our school pay school fees which cover costs for the children in the refuge who can attend the school "for free" then. We have expanded the classrooms to four but need eight in total. Our aim would be to add one classroom each year and afterwards start with a secondary school.

The tasks for the next 12 months will be to open another classroom in 2013, and to refurbish some damage that was caused by the heavy rains in December 2011 and April 2012.

By purchasing land and introducing farming (maize, vegetables, chickens and cows) we succeeded in nourishing the children in the refuge with fresh vitamins and proteins and reduced the need for outside food purchases.

Tareto Maa plans to promote sustainability and to offer educational training (for children in the refuge who want to become farmers as well as for members of the community) with new farming projects which could include a greenhouse, a tractor, beekeeping, further land for farming and consultancy with external experts on pilot schemes.

So our farming project intends likewise to extend the food supply of the Tareto Maa Refuge, to offer job prospects to young people and to improve the food supply for the whole community.

Background information and data: All farming in the Transmara region has to deal with harsh conditions. In the previous years the region suffered from draughts (as in 2009 and 2011) as well as from floods (as in 2012 and 2013). Furthermore the farmers are currently struck by a plant disease that destroys much of the corn harvest (maize being Kenya's most important staple food). The disease hit many parts of the Rift Valley in Kenya, and it is called: Maize Lethal Necrosis Disease (MLN). Obviously the disease is caused by viruses. This article provides some basic data about the disease: [1]. Due to this disease, a significant part of the corn dies. The Tareto Maa cornfield has been affected as well in 2013. Nearly the complete harvest is lost. We must urgently find ways now to protect the field during the next planting season or we must try to get resistent seed somewhere or we must switch our farming to other crops (e.g. potatoes). This will be one of the major challenges for the months to come. Tareto Maa has already talked with the Kenyan Ministry of Agriculture, the District Agricultural Officer in Kilgoris and the German Society for International Cooperation (GIZ) in Nairobi to work together in informing the local community about the plant disease and about available options of crop rotation and in improving the food supply for the Tareto Maa Center.

Tareto Maa thinks beyond the secondary school education of its girls. Job opportunities through employment training and the acquisition of vocational skills are essential in securing their future and to promote a central message: That education and not being circumcised and married early is the key to their family's prosperity.

The idea of the training centre is similar to the one that led to the foundation of the primary school: it is providing services for the wider community, and by charging fees for these service we are, at the same time, able to finance the education and training of the girls in the Tareto Maa Refuge.

Tareto Maa wants to improve the health services to the children in the Tareto Maa Centre as well as to other members of the community. One important task is to provide vaccinations and general health advice.

Furthermore, we want to establish a medical clinic. At the moment, the nearest doctor is located in Kilgoris. That is a 4 hours march away! Many people die on the way before they reach the hospital. For the people south of Shartuka (where Tareto Maa is located) the situation is even worse, as the distance to the next hospital is even bigger for them. Therefore Tareto Maa wants to expand the Center with a clinic/medical station to improve health and emergency aid for the people in this rural area.

Please don´t hesitate to contact us at the following email address: