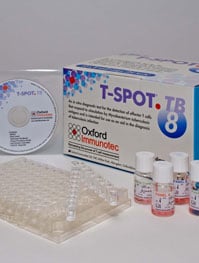 TB kills an estimated 2-3 million people per year worldwide, with an estimated 50% of cases going undiagnosed. Unfortunately, the TB skin test, which has been used for the past century, is prone to false negatives and false positives, particularly in developing country settings. In developing countries, a more specific and sensitive test is needed.

The T-SPOT TB test measures the specific antigens that stimulate the effector T cells. Effector T cells are short-lived, and their presence indicates that the cellular immune response is currently countering pathogens, and is diagnostic of an active infection. The proteins that the T-SPOT TB test measures are not found in the BCG vaccine, which eliminates one potential source for false positive rates. Additionally, these antigens are produced even by immunocompromised individuals, reducing false negative rates. The manufacturer reports that the sensitivity of the T-SPOT.TB test is 95.6% and the specificity of the T-SPOT.TB test is 97.1%.

This device has been used in different parts of the world.

Initial research funded and conducted through the University of Oxford. This project has also received private funding from international investors such as Clarus Ventures, Wellington Partners and DFJ Esprit. The complete list can be found here.

Dozens of peer-reviewed publications are provided by Oxford Immunotec in the following list.

Guidelines for use for multiple countries. Link available here.

IP and copyrights are privately held by Oxford Immunotech.