This article focuses on a sustainable way of fish farming called "Integrated multi-trophic aquaculture"W. Integrated multi-trophic aquaculture makes use of a integrated recyling system (often using tanks rather than using cages at sea). The normal method of using cages at sea is called "offshore fish farming". Another (equally inefficient method) is called a "flow-trough" system.

The advantages of a regular integrated recycling systems are:

Now an explaination on what we mean by "sustainable" integrated recycling systems. Normally, an integrated recycling system consists of the combining of algae or seaweed with mussels or fish. Both organisms are commercial organisms. Although this is indeed already an improvement over offshore and flow-trough systems (since the feces of the fish is absorbed to a degree by the seaweed or algae), there is still a lot of room for improvement.

This improvement includes the use of worms (earthworms or sandworms, depending on salinity level of the water). By using worms, non-commercial (faster growing, more efficient) algae can be used. Normally the algae is chosen for a specific function in mind.(ie for making biofuels, components for skin care products, ...) Seaweed is sometimes also chosen, which is even less efficient. By just choosing the most efficient algae depending on the ambient climate (salinity level, temperature, nutrients in the water), and by using these algae to feed worms, the system speeds up, and an extra "buffer" is made (polluted water needs to be refreshed quite frequently, even before all nutrients have been absorbed by the plants).

The reason why seaweed is even less efficient is due to its nature. Seaweed requires a firm attachment point (in practice lines are used attached to buoys). Algae can just grow in the water, without an attachment point. The salinity level is also different (seaweed= 3-30 g NaCl/l, algae= 20-30g NaCl/l)

Before being able to design a integrated recycling system, we need to accustom ourselves with the lifecycle of the fish in question. We btw also immediatelly take into account the living requirements of the algae, ... As an example, we show the lifecycle of salmon, which is a fish that spawns in fresh water (rivers) and once matured, heads out to salt water (sea), the latter is called the "smolting" phase.

Salmon breeding starts with selecting and collecting broodstock: healthy and sexually mature male and female salmon. After fertilisation the eggs are placed on hatchery trays (trays with a height of 20 cm). One tray can contain 28,000 eggs. Several trays can be placed on top of each other. Incubation takes place and the so-called “eyed eggs” are transferred to hatcheries, where they grow into fry with a weight of 0.2 grams. In their natural environment eggs incubate at the end of the winter season or in the beginning of spring. The hatcheries, in which the salmon eggs incubate, are small tanks filled with fresh, oxygen rich water. The eggs are kept in semi-dark tanks with a water temperature of 4 to 8 oC. In order to fasten the incubation process, the temperature may be increased up to 10 oC. The hatchery water should be filtered continuously in order to prevent pollution and to avoid damage to the eggs.

In phase 0 the trays can easily be installed on top of each other and do not demand much room. One tray can contain up to 28,000 eggs. During phase 1, when eggs hatch and grow into fry, small hatcheries can be used. The Alevin and fry mainly exhaust their yolk sac and hide in the spawning area. A small fresh water tank is needed. It is essential that hatching takes place in dark conditions with a water temperature of 6 to 10 oC at most. Until the smolting phase the oxygen saturation level should amount to 70%. The oxygen level in wastewater should not be less than 6 mg per litre wastewater. [1]

As soon as the eggs incubate, the Alevins (baby salmon) are exposed to semi-darkness. Alevins grow into fry and consecutively into parr. Alevins and fry exhaust their yolk sac. As soon as fry reach a body weight of 0.2 grams, they are removed to a larger fresh water tank, where they remain until they grow into parr and reach a weight of 5 grams. Parr are fed with carefully selected and protein rich feed and grow into smolt. Continuous monitoring of the temperature (4 to 8 oC), the purity and the oxygen level of the water is of crucial importance in this breeding stage. Parr are mainly farmed in circular breeding tanks that may vary in size. The water is permanently circulated. Norwegian and Scottish breeding tanks have an average diameter of 3 to 4 metres and a depth of 1 metre. When salmon reaches a length of 12.5 cm and a weight of 80 grams, the smolting phase starts and salmon is transported to salt water cages. These cages are usually located in coastal waters or on the open sea close by off shore locations, which are becoming more and more popular. To stimulate the growing process, a special diet is administered to smolt salmon. The saltwater cages are usually square. They measure 30 by 30 metres and have a depth of 20 metres. A maximum density of 25 kilograms per cubic metre should be maintained, which corresponds with 5 adult salmon per cubic metre. 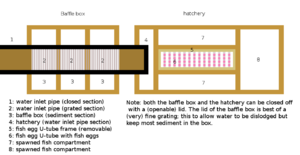 Integrated recycling system are made by companies such as Hesy, ...

Page data
Retrieved from "https://www.appropedia.org/w/index.php?title=Sustainable_fish_farming&oldid=624982"
Cookies help us deliver our services. By using our services, you agree to our use of cookies.
Category:
Maintenance categories:
Comments
Privacy policy · About Appropedia · Disclaimers · Mobile view · Content is available under CC-BY-SA-4.0 unless otherwise noted.
</html