Another very different group of users are entrepreneurs who own cafés or restaurants, selling street foods, or selling staple foods such as bread or chapattis. In such cases, the stove is likely to be used for several hours each day.

Heavy weights, such as a full urn of boiling water, will regularly be placed onto the stove. The stove must therefore be built to withstand such loads. When a stove fails, it not only stops production for that day, but can also lead to the entrepreneur's reputation for reliability being damaged. If livelihoods are dependent on cooking food, the stove must be reliable, sturdy and strong. It should last for several years and be easy to maintain in situ.

Where people are subjected to emissions for long periods, it is very damaging to their health. Those using institutional stoves will regularly be exposed to pollutants for many hours a day. Illnesses related to smoke inhalation include respiratory illnesses, eye discomfort and infections, there is some evidence of links with tuberculoses and heart disease, and exposure of expectant mothers is implicated in low birth weight in infants.

If a stove can use a variety of fuels, it may be possible to use lower cost fuels, such as agricultural residues, at some times of year. However, a stove that relies solely on residues can only be appropriate if these residues are assured. Similarly, a solar cooker for institutional use is only appropriate where the sun shines all through the year and where most of the cooking is done during the day. Otherwise, a secondary stove will be needed.

When an organisation or individual is considering an institutional stove, other factors need to be considered:

'Rocket-type' stoves are so-called because of their shape. They are rapidly becoming popular throughout the world and are particularly suited to institutional situations (see Case study 1). Rocket stoves depend on efficient combustion (through an internal 'chimney') and efficient heat transfer (through a narrow passage under the pot where the combustion gases must travel). Bread ovens can also be made using the rocket stove principle. 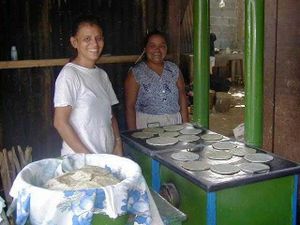 In Nicaragua, an institutional stove has been developed based on the more traditional plancha stove, but using a rocket principle to create the EcoStove - a vented insulated stove. Above the fire is a plancha (a large metal griddle) which is heated both by the flames and by recirculated hot gases. The benefits of using energyefficient institutional stoves can be very great. The Ecostove from Nicaragua is an excellent example. Women there create small businesses cooking tortillas, soups and quick meals. Younger children will help to shape the tortillas and add fuel to the fire. Thus the whole family may be affected by smoke inhalation all day long. The EcoStove stove consumes about one third of the wood previously used, making the sale of food much more profitable. Since all the smoke goes out of the chimney, family health has also improved (Boiling Point 47).

In Africa, too, the rocket stove is having a major impact. To date (2007) more that 1,500 institutional stoves have been sold, This has been achieved through the development, by the organisation GTZ, of profitable stove production businesses, now thriving in Lesotho, Malawi and Uganda, with others starting up in Mozambique, Tanzania and Zambia.

Fuel wood savings are significant – conservatively, at least halved. One tea estate did a trial comparison of 100 litre pots of maize meal on their 'rocket stove' and an open fire, and found that the stove used only 10% of the firewood. A primary school in Mozambique has reduced its expenditure on fuel wood by more than half, and now has an additional US$1,200 to spend on students educational needs. 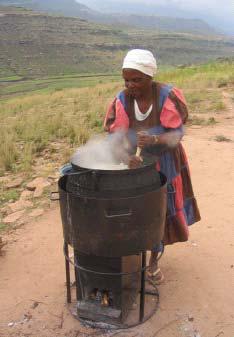 Rocket-type stoves are being introduced into schools in East Africa by the organisation GTZ. The Nkokonono stove, used in Lesotho, is typical of these stoves. The major challenge is to accommodate cooking pots that weight around 70kg and stand on three legs.

Where rocket stoves are used for pots, one of the key features is to have a 'skirt' around the pot which drives the heat against the pot before it dissipates. For this reason, the pot is sunk into the body of the stove with a narrow space between the pot and the stove.

The resultant stove produces very little smoke (Figure 2 shows steam coming from the pot), and uses only a fraction of the amount of fuel using a standard threestone fire (Figure 3).

Figure 3: The use of an improved institutional stove can appreciably reduce fuel consumption (photo: Peter Scott) 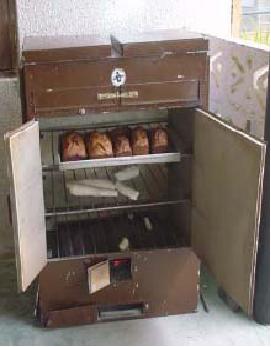 Food that needs baking requires an oven. The Tatedo bread oven is a good example of a small oven that can supply local needs and bring a good income to the person making the food. The oven is made of mild steel, aluminium, ceramic firebox and hotplates (Eco Ltd). It uses charcoal as a fuel.

The oven has a capacity to bake twenty-four 400 gram loaves of bread in 30 minutes using 600g of charcoal. By comparison, it would take two hours to bake ten similarsized loaves with the traditional method (Sanga, GA).

The oven can be bought on credit and with a good market for bread, the profits can allow the entrepreneur to pay back the cost of the loan and still earn a good income. 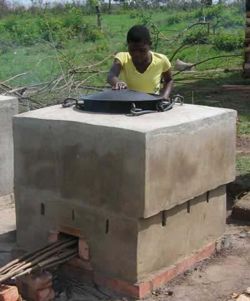 This large stove is made from common materials, mostly 9 inch brick 'seconds' which are low cost, usually because they have not been fully fired (Pemberton-Pigott, C.).

A thin cement slab in the centre creates a hollow lower section supporting a 70 litre cast iron three-legged pot – favoured in Southern Africa when cooking for large groups. A kg of air-dried wood cooks over 8 kg of food.

The stove is built partly on rocket stove principles. It is unconventional because it has pre-heated air directed into the fire from the back of the stove provided by a heat conducting, high strength brick combustion chamber. The air is drafted downwards as it heats, improving stove efficiency and combustion. The robust fire chamber resists the impact of wood thrust against it.

Built by semi-skilled workers, the design is based on creating a pattern of bricks that can be memorised. It takes two days and is expected to last several years.

Emissions from the stove are low, producing little smoke, even when the fuel is damp. 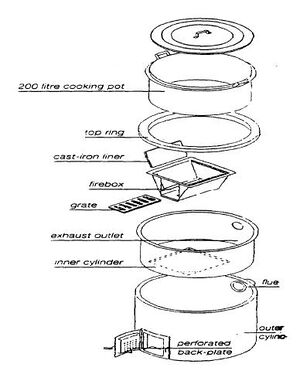 This type of wood-burning stove is of a more traditional style, having been introduced into Eastern Africa in the 1980s. The Bellerive Foundation manufactured the stove to high quality control standards. The type of stove continues to be popular and similar ones (though not all of the same quality) are now produced by the private sector in Kenya, Uganda and Tanzania. They are also available in at least 16 schools in Malawi (Eco Ltd).

Constructed of mild steel sheet, cast iron, galvanised sheet and with a brick and clay lining, the stove required metal cutting, bending, rolling seaming and welding equipment for its manufacture. The resultant stove is fuel-efficient, reduces smoke exposure of cooks, cooks quickly, has a long life and requires little maintenance (Westhoff, B & Germann, D). Although expensive (~US$1000) it has a long working life of around 10 years. 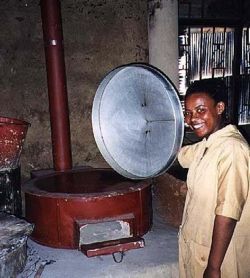 Injera is the staple flatbread food for most Ethiopian and Eritrean households. It accounts for over 50% of all energy consumption in Ethiopia, and over 90% of all household energy consumption. The Mirte stove, developed by the organisation ESD, can save over half the wood fuel needed to bake it in the traditional way over an open fire. It also rids the cook of much of the pollution experienced in a traditional stove. This stove is a modular, prefabricated stove made from cement and local construction materials. It can be produced relatively easily, in large quantities, by a range of different scale producers, at inexpensive prices. The commercial bakers tend to be housewives who earn almost all their income from baking and selling injera to hotels, small restaurants and other households. Thousands of injera bakers have already purchased the Mirte. The Mirte saves commercial injera bakers over 3.5 tonnes of fuelwood per year, a savings of roughly £200 per year. This pays for the stove in days, and makes the sale of injera even more profitable for women bakers. It also protects them from smoke and flames, and saves Ethiopia scare forestry resources (Judge, E.) 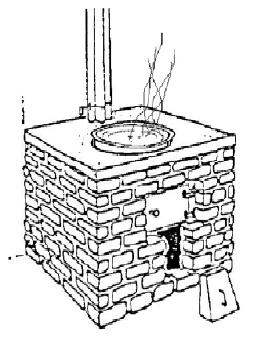 Two stoves are being promoted by the institutional peat stove programme in Burundi: the Burundian Community Stove (BCSt) designed for large pots of about 50cm diameter, and the Two-Pot Peat Stove for casseroles up to 27cm diameter. Features of the stove include:

A major requirement of solar cooking is, of course, plenty of sun, and where there is a pressing need for alternative energy. Large capacity institutional solar cookers are useful in relief projects as they can save tremendous amounts of cooking energy in group feeding situations such as shelters, orphanages, clinics, and schools. The most recent design, adopted by Solar Cookers International for refugee camps is the panel cooker. Its major features are low cost and increased portability, as the panels are hinged and can be folded up (Curtis, DO).

For small enterprises, the Villager Sun Oven, being disseminated by SUN OVENS International, is specifically designed to bake bread, cakes and pastries for sale in a specified geographic region. This oven reaches temperatures in excess of 260° C. This oven is specifically designed for bakery operations and has an effective life of at least 20 years. The oven is equipped with a propane back up system, which allows it to be utilized at night or during the rainy season (Sun Ovens International).

Agricultural residues are often considered a problem, but if they can be burnt effectively they become an asset – (see Technical Brief Paddy Husk & Sawdust Fired Industrial Stove). Rice husk is a particularly problematic residue as it has a low calorific value (not much heat for a lot of fuel), but it is produced in very large amounts. An alternative way of burning fuels, called gasification, is allowing rice husk and other bulky fine residues to be burnt effectively as fuel. 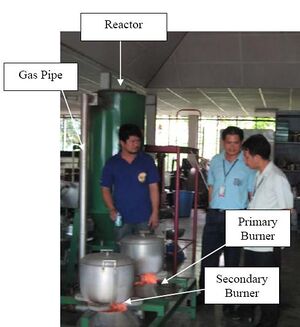 The institutional size rice husk gas stove technology shown in Figure 10 can be used by restaurants, school canteens, small-scale processing industries, catering services etc. Rice husk is gasified inside the reactor, and the gas generated is ignited in the burner to produce a luminous controllable bluish flame for cooking (Belonio, A).

The stove consumes 14 kilograms of rice husk per load within 50 to 55 minutes of continuous operation. A small quantity of electricity, about the amount required by a light bulb, is needed to blow air into the mix. It takes around 1 minute for the stove to be started up, after which two 10-liter pots of water can be boiled in the stove within 18 to 23 minutes. Advantages include:

Institutional stoves have the potential for providing important services at a low cost to large numbers of people. They also provide employment through small locally-available services to communities. There has been a great deal of work done on institutional stoves over the last few years, resulting in several important impacts:

Institutional stoves have an important socio-economic role to play in society. Well-designed, they provide useful services to the consumer and a good income to the provider. They can also reduce overall fuel use within a community and improve the use of residues which would otherwise be a problem.