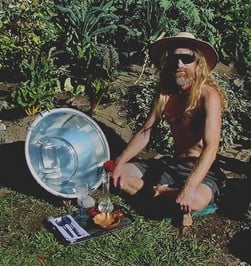 Stadium light reflector hoods function as solar cookers and drinking water pasteurizers. When aimed at the sun the parabolic reflector works in reverse, by focusing concentrated sunlight to a black pot set approximately where the light bulb normally is. The reflectors are readily found in industrialized societies, in cities that have athletic stadiums. The lighting systems are replaced about once every 15 to 20 years and the reflectors can be obtained by contacting the managers of the sports stadiums and by checking at local recycling centers and metal scrap yards. The reflectors hoods are ready to function as parabolic solar cookers without significant modification. In non developed countries these parabolic reflectors could be used as templates for teaching villagers and refugees how baskets and ceramic pots can be made in that parabolic shape, lined with reflective materials and used as solar cookers and water pasteurizers. 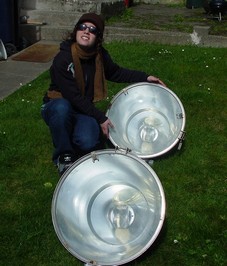 A long term goal could be to attempt a high profile stadium light solar cooker demonstration by obtaining permission to place stadium light reflectors along the end lines of the FIFA World Cup soccer field, highlighted by a big screen half time presentation hosted by someone like the soccer star and World Food Program spokesman - Ronaldo [2]. A hundred million spectators, watching the games around the world would learn of the plight of two billion women forced to find and carry fire wood all day, as well as suffering and dieing from the health effects of inhaling wood smoke from chimney-less-indoor cook fires all their lives. Mention could be made of the millions of people suffering from chronic ill health do to water born diseases and the ~30,000 who die from such diseases each and every day. After pointing out that the factories necessary to make one million of these stadium light reflectors (solar cookers) already exist, followed by an announcement a one year moratorium on new stadium light installations in order to free up factory production lines. For one year, the hundreds of factories that already make stadium lights could produce a million parabolic stadium light reflectors to be shipped to villages and refugee camps around the world. Once there, the parabolic reflectors would be used as templates for weaving parabolic baskets and making ceramic parabolic bowls that when lined with reflective materials (bits of shattered glass mirrors or shiny tin can lids) would be able to concentrate sunlight for solar cooking and pasteurizing drinking water.

Such a practical and versatile tool would be highly valued properly maintained. If made of a corrosion resistant material such as salvaged stainless steel, and widely distributed to those in need, there is a chance that some might survive as a true and helpful message to civilizations of the distant future. This is a way ensuring the survival not only of this knowledge but of our species and the great diversity of life on earth. 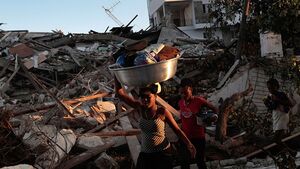 A young woman who has survived the devastating earthquake in Haiti on 1/12/2010 carries what she has managed to salvage from the ruins of what was once her home using a metal wash basin, which if parabolic in shape and mirror finished, could also function as a solar thermal water pasteurizer, solar cooker and even a satellite dish internet up-link antenna for relaying news and vital communications. 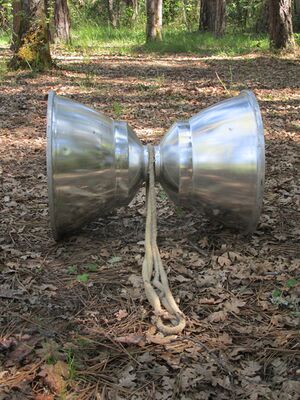 Two parabolic stadium light reflectors are connected at the vertex and set horizontally on the ground to be used as a model for a 20 gallon capacity parabolic water-wheel; a device used for transporting 72.6 kilograms (160 lbs) potable drinking water by hand over long distances. It has lower rolling friction and lower rolling noise db levels compared to tradition rolling-barrel designs because it rolls on only the narrow outer rims. The stadium lights come with glass covers that normally protect the light bulb from the elements but are unable to contain the water. However, they could be re-engineered to be water tight and more impact resistant. A fail safe emergency brake is needed to automatically stop the water wheel should it accidentally get free and start to roll down a steep grade on its own. An alternative design could connect the two reflectors together along the outer rims instead of at the vertex, creating a single rimmed wheel that can negotiate a narrow trail and would lay safely on one side when resting. The water-wheel stadium lights could be disconnected and stowed compactly, like nested bowls, for shipping on pallets or secured to C-17 or C130 parachute air-drop platforms. 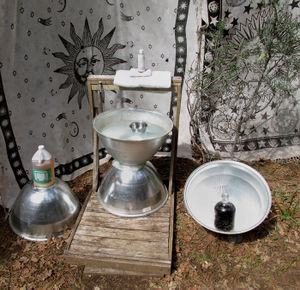 Salvaged stadium light reflectors are able to function as water a heater/pasteurizer, 10 gallon wash basin, and pedestal. The floating aluminum bowl is used to pour water over ones self when rinsing off soap suds. Dr Bronner's liquid soap was used for testing this bathing technique because it rinses off easily without leaving a soap film. The soap is organic, biodegradable and phosphate free. Bathing in this fashion is quite pleasant as opposed to using buckets of cold water. The wooden platform was made by reconfiguring a discarded futon frame salvaged from a scrap wood pile. The wash basin can also be used for washing clothes by hand. The stadium light reflector can heat one gallon of water in a black container to 160 degrees f in 3 hours on a warm sunny day. Several can be used at one time to heat a sufficient volume of water for bathing. The hot water is mixed with cooled water in the wash basin to make it the perfect temperature for bathing outdoors, depending on the air temperature; if the bathing water is warm enough one can bathe comfortably even if it's near freezing cold outside, by frequently pouring hot water (~ 104 degree f) over ones self using the floating aluminum bowl. The stadium light reflectors stack concentrically as nested bowls (para-bowl-oids) for transporting on pallets to be air-lifting to refugees fleeing a war, ethnic cleansing or a natural disaster.

I set stadium light solar cookers facing the sun with equal parts organic brown rice and brown lentil beans in pint mason jars. (1/3 R&B - 2/3 H20). I paint the jars black on one side with Tempera paint. The sunlight is concentrated across the entire lower half of the black side of each jar, but not to a fine point. I try to keep the concentrated sunlight away from the lid. Reflective lid covers made from aluminum foil protect the lids from being overheated by focused sunlight, thus preventing the lid gaskets from melting. The black paint absorbs sunlight well and speeds the initial heating process. Cooking black beans in a separate jar, turns the water black as well; so that the very contents of the jar absorbs sunlightand the jar does not have to be painted black in this case.

Two piece Mason jar lids are designed to contain boiling liquids while venting excess gas pressure. Mason jars do not explode when used in this way. If they did, they would be banned and ~100 million people would be forced to stop using them for canning. Other types of jars, not made of Pyrex and not having two piece gas venting lids are not recommended for this type of use by this web page. (Non-Pyrex glass tends to crack more easily and one piece lids allow too much gas pressure to build up inside.) The slightly higher air pressure and steam inside hot Mason jars (~5lb/sq in), can pressure cook safely. However, if the outside of the jar is painted black and no water is inside to evenly distribute the heat across its surface, a focused point of light can crack the jar. Pyrex glass expands at a rate which varies proportional to temperature. Different temperatures at 2 adjacent points on the surface of the jar can sometimes cause a crack to form and even split the jar in two. I have never cracked an unpainted jar but always wear gloves and shop-workers' impact resistant safety sun glasses just in case. I also keep the thick glass cover on the stadium light for an extra measure of safety. The glass cover also acts to keep warm air around the jar and that speeds the cooking process. After about 1/2 hour the water in the jar should be bubbling and at this time I carefully pick up the jar with thick gloves and gently tumble its contents to make sure the rice and beans at the bottom cook thoroughly. This serves the same function as stirring. After agitating, place the jar back in position, right side up, at the focus of the stadium light but now with the unpainted side of the jar facing the sun. I use a U shaped length of steel shirt hanger to hold the jar in place. After all the water is absorbed by the rice and beans, occasionally rotate the jar a little to prevent the R&B from browning where sunlight is focused. Keep the sunlight focused across the entire bottom half of the jar (rather then a pin point) during this part of the cooking process to ensure the rice and beans at the bottom are cooked. This also helps keep concentrated sunlight away from the lids. When done, (~ 1hr), wrap the jar in an old wool sock to keep warm and/or to allow the cooking process to continue for a while longer inside the hot jar. As the cooling metal lid contracts and tightens, the jar seals air tight. I think this processes of cooking in mason jars helps keep the food fresh longer as long as the lid remains unopened. However, even if the rice and beans smell fresh when opened after a few days, there is still a chance that they are contaminated with a specific bacteria that causes botulism. Its presence is undetectable by smell, taste, sight or touch. True canning of rice and beans actually requires at least 10-15lbs/sq in of pressure for 1.5 hrs at ~235 degrees F in a pressurized canning container in order to destroy the botulism bacterial spores, possibly present, deep inside of the non acidic beans and rice. The addition of a tablespoon of vinegar to the rice and beans just before canning raises the acidity level to that of fruit used in canning sweet jams. The high acidity level from citric acid in sweet fruit jams destroys botulism causing bacteria and bacterial spores and allows for canning at 212 degrees F without a pressurized canning container.

Caution: These solar "canning" experimental results are presented here as preliminary research findings and are not intended to be followed as canning procedure instructions!