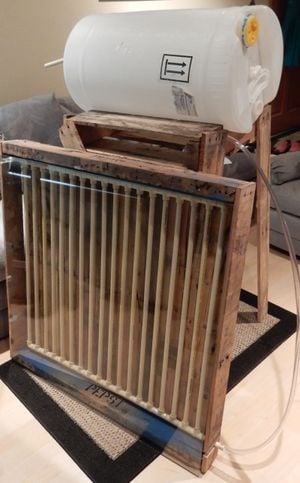 Using the sun as energy & Using water as energy (heat) storage Both existing and future homes can incorporate simple hydro-thermal systems. We know that these systems work, but I feel the need to have hands on experimenting to explore it for myself and inspire others around me to explore this vast source of clean heat (the sun). My design is setup to do that. If I were to raise it a little it could operate as an outdoor shower, or if I were to lengthen the piping I could use it for indoor water/space heating.
My interest in this project also extends to thermal mass technology. Thermal_mass Water has such a high heat capacity I am interested in large tanks inside of a house with collectors outside.

This project can be expanded into:

CPVC pipe was chosen for its higher temperature/pressure rating. Caution should be taken if the water is ever to stop flowing because the CPVC pipe could potentially melt.

Shipping pallets made for an easy construction of the solar collector and free construction material although they are assembled with twist-shank nails that are extremely difficult to pull apart. A flat bar, crow bar, and good hammer and patience are recommended so as to not break the boards when pulling them apart.

Climate
This system is not intended for areas that the temperatures can drop below freezing unless the system is drained during subzero conditions (possibly into an additional indoor tank) or is used as for heating and non-potable water.

Sustainability
I tried to use as many reclaimed materials as possible. Shipping pallets/crates are usually used many times over until they are finally damaged out of the shipping stream. The tank was a used pool chlorine container which also gets recycled and reused. I am not however, sure of how much embodied energy is in them or how many times they are reused but it is far more sustainable that buying new. The CPVC pipe is one of the main components that had to be purchased new and hopefully can have a very long lifetime if properly maintained. I tried to find glass scrap for the collector but was offered a cheap option at my local glass company. Cardboard works for a temporary insulation, however reclaimed carpet or other insulating material can be used. If CPVC came in black, it would save on spray paint. I also had a couple sheets of thin aluminum that were salvaged out of a dumpers. They were NFL promotional signs displayed temporarily at a casino.

_* I already had the part laying around.

Constructing the Collector and Pipe Array

Setting up the Tank

Please see my power point file for an overview and solar related calculations. At perfect efficiency I was able to determine that I could get a 20F temperature rise in 15 gallons of water over 1 hour period of time at high noon. I know that there can be improvement in my physics calculations. Please contact me to collaborate on organizing and correcting them. File:AVpresentation.ppt

After going through my physics calculations I realized that one implementation I have never seen done is to put dividers inside of the collector panel. I believe that dividers would stop the convection of air inside of the box. By reducing the air movement you are reducing the heat that is obtained by radiation on the pipe from conducting to the glass. In essence you are increasing your air insulation inside of the box. In other words, the less air flows around inside of your collector box, the less it can transfer heat to the glass to be lost from the system.

Speaking of insulation of the collector box, I am curious about the percent thermal mass material and insulation material. The box should be insulated with non-conductive material to prevent the heat obtained by radiation from the sun from being lost, but a conductive material should be placed behind and near the pipe to absorb the radiant heat so that it can pass it over to the pipe.

Another idea I would like to pursue if allowed the time is mountain it on the roof of where I currently live. I live in a cold climate where freezing is a concern. My idea is to mount this system on my room and have a drain valve that comes through the attack down into my room to another tank. It can be automated using an arduino. After the water has heated though the day without pumps (electricity), the system can drain into the second tank in my room/house where it will radiate that heat back into my living space over night. The next day the water can be pumped up to the roof to be heated all over again. Where I currently live is also designed where I could run a shower head through the attack ceiling into the shower. In this scenario the system would be drained into my shower instead of another tank. Just some ideas.

Test the panel and compare to calculations.

This was a really simple and cheap build. It is definitely worth it whether you want to just play around with solar hydro-thermal collection or implement it. Having a final location and purpose would make this build even easier because you will know exactly where it is going to be placed making measurements easier. Hopefully after some testing I can obtain a payback period.

I had one sunny day to test at the school before 2 weeks of cloudy and snowy weather. You can see the sun was very low and moving through some trees. In about 1.5 hours as the sun passed behind a couple trees lending several minutes of shade each time the entire system of 15 gallons rose by ~6 degrees F. 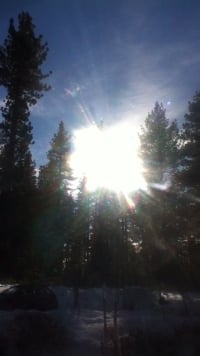 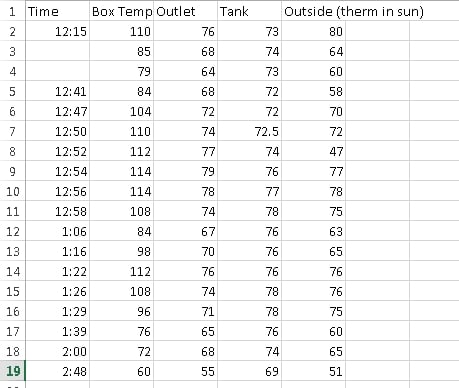 My project was inspired by this: Super Simple, CPVC Solar Hot Water Collector

Page data
Retrieved from "https://www.appropedia.org/w/index.php?title=Solar_Hydrothermal_Collection&oldid=601179"
Cookies help us deliver our services. By using our services, you agree to our use of cookies.
Categories:
About Appropedia · Policies · Contact · Content is available under CC-BY-SA-4.0 unless otherwise noted.