Severe erosion. Steve Groff confronted a rolling landscape subject to severe erosion when he began farming with his father, Elias, after graduating from high school. He and his father regularly used herbicides and insecticides, tilled annually or semi-annually and rarely used cover crops. Like other farmers in Lancaster County, they fretted about the effects of tillage on a hilly landscape that causes an average of 9 tons of soil per acre to wash away each year.

Tired of watching two-feet-deep crevices form on the hillsides after every heavy rain, Groff began experimenting with no-till to protect and improve the soil. "We used to have to fill in ditches to get machinery in to harvest," Groff says. "I didn't think that was right." 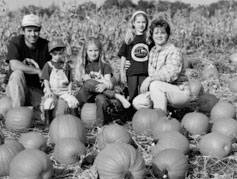 Groff, his wife, Cheri, and their three children live on the farm that was purchased by his grandfather in 1935. Groff's father, Elias, was born in the farmhouse where Steve and his family are now living. Elias, who raises about 70 steers, also does all of the marketing of the cash crops.

Steve Groff started small with what he now proudly calls his "permanent cover cropping system" — a rotation heavy on ground covers and reliant upon no-till planting. He decided to experiment with ways to slow the erosion, partly because Lancaster County soil is among the best in the country and partly because the soil washed — via the Susquehanna River — into the Chesapeake Bay.

In the early 1980s, Groff began using no-till methods to plant corn on 15 acres with a no-till corn planter he rented from the Lancaster County Conservation District. Within a few years he noticed small improvements from planting without plowing, but the true soil-saving began in 1991 when Groff began growing winter cover crops and no-till planting his cash crops into a thick vegetative residue.

The new system keeps his ground covered all year. In the process, he has greatly reduced erosion, improved soil quality and knocked back both weeds and insects. Moreover, his vegetable and grain yields have improved.

Focal Point of Operation — No-till and research Steve Groff raises grain and vegetables every year, but his soil shows none of the degradation that can occur with intensive cropping. Groff mixes cash crops such as corn, soybeans, broccoli, tomatoes, peppers and pumpkins with cover crops and a unique no-till system that has kept some of his farm soil untouched by a plow for more than 20 years.

Groff's system — which has drawn thousands of visitors to his farm, many of them to his popular summer field days — has made him nationally known as an innovator. Each year, he is a popular lecturer at sustainable agriculture events and conferences, and he has been recognized with numerous honors, including the 1999 national No-Till Innovator Award and a Farmers Digest "most influential person" of 1998.

In the fall, Groff uses a no-till seeder to plant a combination of rye and hairy vetch cover crops. After trying different cover crops combinations, Groff adopted this pair because he likes their varied benefits, such as complementary root and vegetative structures that literally hold on to soil. He lets the crops grow about 5 feet tall, then knocks down the thick mass of plants each spring using a specially designed rolling chopper. The machine, which flattens and crimps the cover crops, provides a thick mulch. Then, Groff uses a special no-till vegetable transplanter designed at Virginia Tech to set vegetable transplants directly into the residue blanketing the soil.

The system, which slows erosion, breaks up soil compaction and reduces weeds, has brought interest from growers as far away as Oregon. With the right equipment and a commitment to experimenting with cover crops, other farmers can adopt no-till, says Groff, who also has observed less insect pressure from such persistent, tomato-damaging pests as Colorado potato beetle.

"I believe that any system has to be profitable for the farmer to be sustainable for the long term," Groff says. "Environmental responsibility should be carried out to the best of the producer's ability in relation to the knowledge and experience he or she has."

Although Groff is happy with his system, he continues to conduct research and open his farm to researchers interested in documenting the benefits of no-till systems. Scientists with the University of Maryland and USDA's Agricultural Research Service have conducted various experiments on Groff's farm over the last several years to take advantage of the ability to test cover crops in an actual farm setting.

Groff himself has received two SARE grants to test new growing methods. In one trial, he found that planting corn in narrowly spaced rows not only reduced weed competition and controlled erosion, but also increased yields. In a more recent project, Groff studied the economic and environmental impacts of growing processing tomatoes in a no-till system compared with the same crop raised conventionally.

"I don't think there are shortcuts to sustainability without the collaboration of researchers, networking with other farmers, and thoroughly studying the feasibility of an unfamiliar practice," Groff says.

While conquering erosion was his first goal, Groff also concentrated on how to make more profit per acre. The cover crops allowed Groff to cut his use of insecticides and herbicides. Total costs for all pesticides used on the vegetable and crop farm has dropped from $32 an acre 10 years ago to $17 an acre today, a figure averaged over three years. Although the initial cost of cover crop seed and establishment added an expense, that cost is offset by the nitrogen contribution from legumes, soil retention and increased soil tilth.

Groff found in one test that planting corn in narrow rows increased per-acre profit on corn silage by $57 and per-acre grain profits by $30 an acre. In his research project on processing tomatoes, Groff planted 20 acres in his no-till system and compared that to yields from another grower who planted conventionally grown processing tomatoes. The results: The neighbor harvested 21.3 tons of processing tomatoes per acre, while Groff finished the season with 23.7 tons per acre. Perhaps more significant, Groff's seasonal input costs for the plot totaled $281, while the neighbor spent $411.

"No till is not a miracle, but it works for me," Groff says. "I'm saving soil, reducing pesticides and increasing profits."

Some of Groff's slopes are as steep as 17 percent. Thanks to his no-till system, his annual erosion losses remain just a fraction of the county's average. Groff likes to show a videotape he shot during a 1999 hurricane that contrasts muddy storm water pouring off a neighbor's field to small, clear rivulets draining slowly off his fields.

Twenty years ago, Groff's farm attracted the typical array of pests. And although he first began using no-till and cover crops to minimize erosion, he soon found enormous benefits in the continual fight against insect pests and weeds.

"I have yet to use any insecticide for Colorado potato beetle," Groff says of the vegetable pest that commonly plagues tomatoes. "They don't like the cover crop mulch." The mulch also seems to stall early tomato blight by keeping the soil-borne disease organisms from splashing onto plants.

Cover crop legumes like hairy vetch fix nitrogen, minimizing the need for commercial fertilizer. Researchers report that soil in Groff's long-term no-till fields have 5.8 percent organic matter, compared to a neighbor's fields that has just 2.7 percent. They also found that the longer he practiced no-till, the lower the soil's bulk density, giving the soil greater porosity for root growth and air and water movement.

Less compaction, combined with Groff's permanent vegetative residue, helps retain moisture, especially important during droughts. Pennsylvania and the mid-Atlantic suffered months of record drought in 1999, but Groff's soils soaked up nearly every drop of rain that did fall and, when he irrigated, the water was used more efficiently.

Community and Quality of Life Benefits

Groff spends more time with his family during the growing season because he has eliminated tillage passes normally done prior to planting.

Neighbors seem to really enjoy Groff's small herd of bison, which they occasionally visit, but Groff thinks the community appreciates even more his overall commitment to improving the way he and others farm. In 1999, Groff was one of five featured farmers in a national PBS documentary, "Land of Plenty, Land of Want," which shone a positive spotlight on Lancaster County.

"I think the community feels a sense of pride in the way I take care of the soil and the environment as a whole," Groff says. "They seem to appreciate the role I play in being a positive influence on this."

Groff also draws hundreds of visitors to his annual summer field day, racking up 1,325 visitors by the end of the year 2000. Although it is a lot of work, Groff enjoys opening others' eyes to what is possible. "I get the satisfaction that lots of people are exposed to an alternative agriculture and a hope that I can influence farmers to take steps toward greater sustainability," he says.

"Erosion takes away your very best soil!" Groff says. "It's your surface soil with the highest fertility that goes ‘down the drain' during a rainstorm. If you farm land that is susceptible to erosion, controlling it should be your top priority."

Using fertilizer properly to enhance the soil is key. "A good approach is to feed the soil, rather than feed the plant," he says. "A good soil will grow healthy crops. Don't overdo it with fertility amendments as they are a waste and can be a pollutant."

As would anyone who truly wishes to stay innovative, Groff continues to fine tune his system and adapt it to other crops. In 2001, that will include watermelon, cantaloupe, fiber crops and gourds in addition to his staples.

"I'm always planning to research new strategies, because I never expect to obtain the ideal," he says.