Skate to Great is a non-profit charity organization founded by Evan Kosiner and Kaitlyn Weaver which gives underprivileged kids the opportunity to skate -- by collecting and distributing skates, helmets, and equipment across Canada. 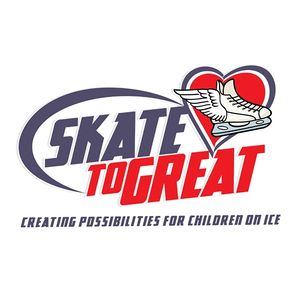 A 2011 report on poverty in Canada indicates 967,000 children, one in every seven, live in poverty.[1][2] In addition, more than 323,000 children belong to families that rely on food banks.[3] Skate to Great was founded in March 2012 with the mission of providing every child in Canada the opportunity to skate; regardless of their economic or physical circumstances. In May 2013, Skate To Great received charitable status and has collected and distributed upwards of 6,000 pairs of skates. The organization directly supports schools, programs and charities in Canada, which enable deserving kids and at-risk youth the opportunity to skate. Skate To Great’s main initiative is to collect new and used hockey/figure skates along with equipment such as sticks and helmets for organizations that need them. Recipients then participate in programs that provide skating opportunities in a supportive environment.[4]

"At Skate To Great we believe skating should be a right, not a privilege for every child regardless of their circumstances."

According to Evan Kosiner, Chairman of Skate to Great, there are hundreds of donation locations across Canada and are hoping to expand the organization's reach to those in other countries.[6]

Locations of all Skate to Great donation spots

Skate to Great is sponsored by numerous organizations including, Play it Again Sports, Storage Mart, Siskinds Law, 1-800-GOT-JUNK?, Skywords, and others.

FedEx is their largest supporter helping them since day one in providing Skate to Great with shipping services, resources and funding. 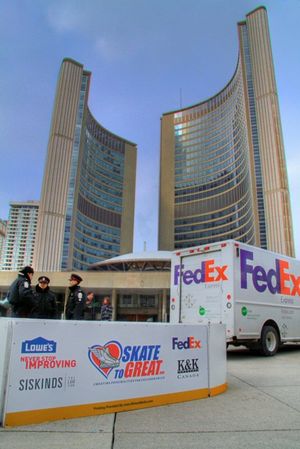 Skate to Great launched the #DonateSkates [7] campaign in 2015 which was sponsored by FedEx. The purpose of the campaign and the hashtag is to spread awareness and being able to recruit skate donors via social media.