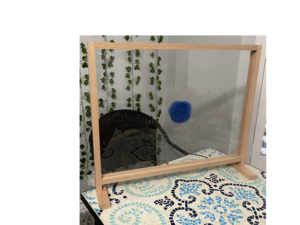 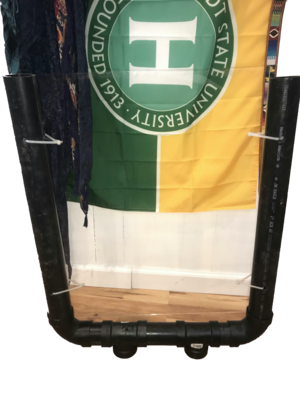 As students of Lonny Grafman's Fall 2020 Introduction to Engineering Design class (ENGR215) at Cal Poly Humboldt (HSU), Carolyn Heredia, Marlin Gast, and Franziska Daumberger took on the challenge of designing teacher barriers for Six Rivers Charter High School (SRCHS). CMF Design was tasked with creating an implement that would protect the teachers from contracting COVID-19 upon their eventual return to school.

The team created two versions of a desktop barrier that is easily replicable by students, effective in protecting teachers from COVID-19, and was within a budget that the team set. This design is called the Small Stationary Solid Barrier, or the Desktop Pirate Protector.

COVID-19 is a virus that can be transmitted through airborne droplets. This virus created a global pandemic due to how easily it is transmitted, which causes problems in various industries in regards to people working in those industries. Arguably, schools are the most affected category and one of the categories that would greatly benefit from solutions to this problem. In order for students and teachers to eventually return to school, steps must be taken to ensure the safety of the students, but primarily the teachers, for without the teachers, there would be no place for the students to return to. Teachers need to be protected from the bacteria that their students inherently bring with them, and into the classrooms.

The Fall 2020 ENGR215 class was given the task of creating different solutions to this problem, specifically for Six Rivers Charter High School, a school serving 9th-12th grade students in Arcata, California.

Barriers between people in conjunction with masks are currently the best defense against transmitting the virus in public settings. Taking this into consideration, CMF Design chose to create a barrier to protect the teachers.

To create this solution, the first step was to choose criteria that would guide the brainstorming process. The team chose three governing criteria, as follows:

The final product consists of three parts that work together to prevent the spread of COVID-19 and other diseases. All parts of the product build upon the fundamentals of social distancing and do not substitute for masks or six feet between individuals.

The main part of the design is a rigid acrylic barrier that uses a stand to sit on the instructor's desk to provide protection from airborne droplets. A guided interaction method is employed to promote interaction through the center of the barrier, this comes in the form of a reusable filter is installed in the middle of the acrylic sheet. This filter enables sound to go through the barrier but not viruses or other particulate. The tactic of the air filter in the main barrier should greatly increase the effectiveness of the barrier.

The desktop barrier has two variations, one of which has a wood frame and the other employs ABS and/or PVC pipe to serve as the frame. The reason for two different materials is ease of access to the different materials, also if the equipment to cut wood is unavailable the ABS is extremely easy to work with and can be put together with purchased fittings.

The second part of the design that insures the effectiveness of the barrier is queue marks that go on the floor six feet from the teacher. The queue marks have been designed and are ready to print at whatever quantity is desired.

The three part design will help create a safe space for students and teachers to return to in person learning. 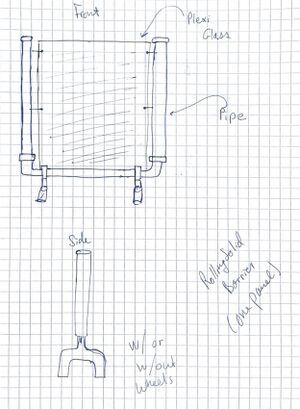 Various prototype barriers were created and tested throughout the design process. Two scale models were created to test for appeal, when presented to test subjects they were received very well so a full size model prototype was created. The purpose of the full size prototype was to test function, it was made with a large wood frame and cardboard barrier material. After testing the function of the barrier using a spray bottle and measurements of indirect airflow it was determined that the barrier did not need to be so large.

Another prototype was a piece of cardboard with a hole in the middle being compared to one without a hole. When a discussion through the pieces was attempted, it was found the one with the hole made it much easier to communicate; this led to the use of a hole and filter in the final product design.

For the queue marks the visual appeal of several different designs were tested before determining the final print layout. 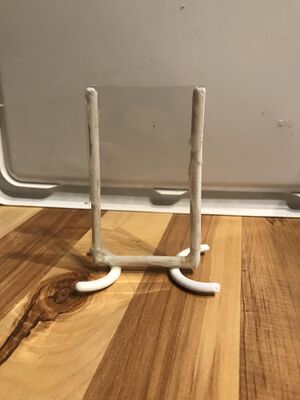 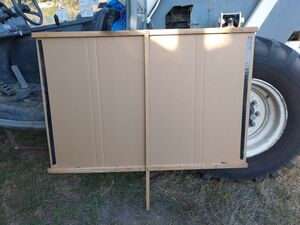 The total amount of people hours that went into this project is 105 hours.

Because the main criteria of the team was to make each unit as easily replicable as possible, which included the sub criteria of each unit being resizable, there are no fixed dimensions for either the pipe or wooden barriers. This was done on purpose in order to make sure that each barrier would be able to fit each teacher's desk. That being said, a video has been made by the team to show an example of how to construct the pipe barrier. The wooden barrier uses solely a saw and a staple gun and is made to fit the chosen acrylic sheet. Slats are sawed into the wooden frame pieces and then the acrylic sheet is slid into the slats, and a staple gun is used to fix all the pieces together.

Because students and teachers will be around the Desktop Pirate Protector almost daily, and because it is in place to essentially "catch" any bacteria that is directed towards the teacher sitting behind it, the Desktop Pirate Protector has the potential to become a trap for bacteria. However, seeing as it is not something that should be touched often, the cleaning of the barrier can be left to the user's discretion. Acknowledging this, CMF Design still recommends that the barrier be cleaned periodically. This can simply be done with any kind of sanitizer.

The Desktop Pirate Protector was designed to be very simple and easy to use and build. Most problems that will arise can be fixed by ensuring that each barrier is made to be level, each fitting/piece is level and completely pressed all the way in, and the build process itself was completed with care. Below are some issues CMF Design anticipates as possible problems.

Because this is inherently such a simple design, there are several additions to the overall design that can be made. These include additions such as the queue marks and hand sanitizer holder listed in the description of the final project. There is truly no limit to what else can be added, or how the Desktop Pirate Protector can be modified. This includes resizing (as was stated in our criteria) as well as changing the shape of the frame.

These iterations can be completed by using the wooden and/or the pipe frames.

Ventilation methods (such as fans) would improve the overall function of the design.