Should I clean my refrigerator coils 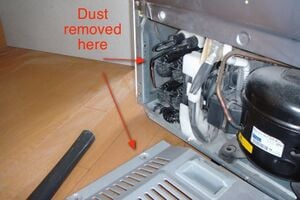 Removed lots of fluff with the vacuum cleaner. It was on the grille and behind it on the coils. After this, the freezer again reached its normal -18°C.

Many websites and pamphlets state that, for energy efficiency purposes, you should clean your refrigerator coils. In most cases this is not a good idea. If the coils are near the floor, they may become plugged, and if they are plugged, it is likely to be beneficial to carefully clean them. Care must be taken to avoid damage to the coils.

One peer reviewed journal article on the subject states that there are no measurable savings from cleaning coils.[1] An article from Lawrence Berkeley National Laboratory calls attention to three drawbacks to this myth[2]:

Other energy sites, home energy consultants, and inspectors concur that there is little to no benefit from cleaning coils, and some state that there may be additional dangers such as breaking the refrigerator,[3] with one stating "This is a classic example of a widely held belief based on assumptions rather than measurements."[4]

On the other hand, the Home Energy report [5] states,

In other words, some designs of refrigerators benefit from coil cleaning and some do not.