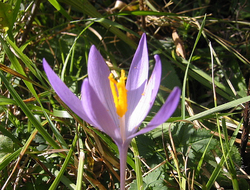 Saffron (Crocus sativus) is a spice derived from the dried stigmas of the large purple crocus (also known as the saffron or autumn crocus). Originating perhaps from China and long cultivated in the Turkish/Greek region, saffron was grown in Spain from around the Middle Ages and this is where some of the best saffron has long been sourced from. It was also grown in England for three centuries in the counties of Cambridgeshire and Essex.

Other areas that grow saffron include Kashmir, Iran, Tasmania in Australia and New Zealand.

Saffron is the red-orange stigma from the flower of the autumn crocus.

Depending on where the saffron has been sourced from, its colour can deepen. For example, saffron from Iran tends to be a dark mahogany colour and the flavour is also deeper and more smoky than Spanish saffron.

The reason for high price of saffron[edit | edit source] 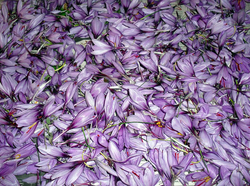 Saffron is an expensive spice (indeed, it is by weight the world's most expensive spice) because it requires intensive hand collection to collect the stigmas. Around 60,000 stigmas are required to make 450 grams (one pound) of saffron or one million stigmas to make a kilogram.

When collecting saffron, workers first pick the crocus flowers and add them to mounds around the fields. Then, each worker painstakingly removes three stigmas from each flower head. 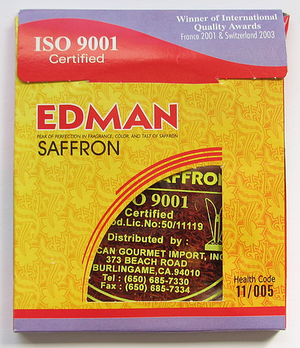 A typical packaging for saffron

Saffron can be purchased in different forms, either as whole stigmas in a small (usually clear) container or as a powder.

When buying saffron powder that is not from a reputable supplier, there is a risk that the "saffron powder" has been adulterated with other colourings or flower petals, to make it go further. Typical flower petals added include marigold petals and safflower petals, which add colour but no flavour.

Turmeric is a distinct spice and is not saffron. This confusion is often innocent, so be an alert consumer.

Saffron is best purchased and consumed in the same year in which it has been grown and picked.

Saffron is used principally as a food colouring. One renowned use is in Spanish cuisine, in the paella dish. It is also a key ingredient in French bouillabaisse, pilafs in Iran, biriani in India and risotto in Italy. Saffron cake is also made in many countries, especially around the Christian celebration of Easter. 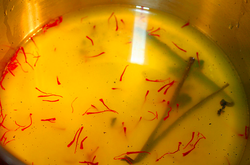 Saffron also has a scent of its own, which can be overwhelming or medicinal-like if overused. However, in the small amounts required to colour and/or flavour a dish, the flavour of fresh saffron will blend in well with other flavours and indeed, improves bland, unpleasant and sharp flavours to tone them down and smooth the dish. Around 8-12 stigmas are needed for a dish but a generous pinch is always fine!

Saffron has been used as a dye for fabric but its expense doesn't make this a frequently resorted to option.

Saffron is grown from a mother corm, which will die after a year and leave about five or six daughter corms. These need to be dug up every two to three years and replanted.

Saffron is best grown in areas that have hot summers and cold winters. The cold winter is important to killing off insects that would otherwise eat the bulbs.

The soil should be free-draining.

If you grow your own saffron and wish to harvest it, be aware that it is back-breaking work that has to be done by hand. It helps if you grown longer nails, in order to pluck out the stigma with greater ease. It is best to squat or kneel to pick the flowers, and it might help to use a kneeling pad if your knees hurt placed directly on the ground.

What you can expect:

Time must also be spent drying the stigmas, which can be done in an oven or using a circulating dehydrator.

Saffron has been used medicinally, to treat depression, headaches, pain and gastrointestinal upsets.