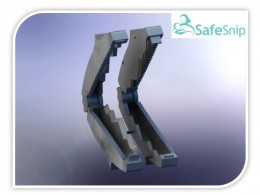 SafeSnip is a three-inch plastic disposable and degradable device that cuts, seals, and disinfects umbilical cords in a simple, one-step procedure. SafeSnip breaks in to two after being used to cut the cord such that one half of the device remains clamped onto the baby's umbilical cord to seal the wound while the other can be discarded. Its symmetric design and multiple safety features minimize misuse and shorten the delivery process. It would also retail for under $1, offering an inexpensive yet effective means for safe umbilical cord severance in developing nations.