The Sea Level Awareness Project was created by the group, Kids vs Global Warming in Ventura, Ca. SLAP poles are a community awareness project designed as a simple, but effective visual representation of the sea level rise that will occur in the near future if nothing is done to combat it. The original poles were erected in Ventura, Ca. along the city's beaches.[1] There have since been SLAP poles installed in both San Diego and New York City. Kids vs Global Warming is a non-profit organization aimed at teaching children about climate change and encouraging activism among youth. 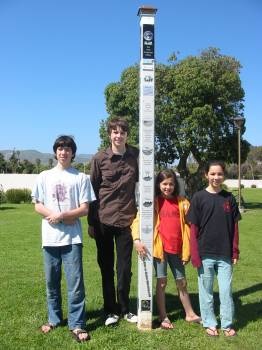 Students stand next to an eight foot SLAP pole in Ventura, CA.

Kids vs. Global Warmingwas founded by Alec Loorz of Ventura, Ca. At the age of twelve, Loorz was inspired to help better this world and fight global warming after seeing the Al Gore film, "An Inconvenient Truth". Loorz applied to be a presenter for Gore's Climate Project. he was rejected for being too young. Unaffected, Loorz took matters into his own hands and began educating young people, notably his peers, about the climate crisis.He began with Powerpoint presentations, which he showed to his class and which he originally only made to prove a friend wrong.[2] Loorz found that even without help from his idol, Gore, he could make his own progress through activism. A year later was personally invited back by Mr. Gore, to become the organization's youngest speaker. The mission of Kids vs. Global Warming is "to educate youth about the science of global warming, and empower them to take action."[3] They achieve this through:

Loorz began the group to teach children about the effects of global warming, because, as he states "It's my generation that is going to be affected by this, and we need to help stop it."[4] Along with his mother, Victoria Loorz, and a group of thirty six children, the funding was raised for the first SLAP poles to be installed in Ventura in 2008.

SLAP Poles were designed as a visual tool to raise awareness of sea level change. The poles are each eight feet tall and four inches wide. Along the length of the pole is information regarding global warming, as well as physical representations of how high the water will be in a given year. The original poles in Ventura also had information about the potential destruction of important landmarks which would occur if the Greenland ice cap melts. These included the city's waste water treatment facility and state beaches.

The poles are decorated in a style reminiscent of Apple's iPod. Black images of things like bicycles, light bulbs, and gas pumps sit on white backgrounds above phrases like iSuck, iEmit, and iWaste. These logos were also used during Kids vs. Global Warming's iMatter March

What began as ten SLAP Poles in Ventura has become much more. Kids vs. Global Warming boasts over two thousand kids who have joined the cause. Three years after its inception, the SLAP Project had invaded ten cities in three different states.[5] The group hopes to use their power to reach out to more than just children. Loorz hopes to get his message out to world leaders, with aspirations of changing legislation. The group believes in the power that children have, and aims to help kids get their voice heard so that when they are the older generation, the earth will be preserved for generations to come. 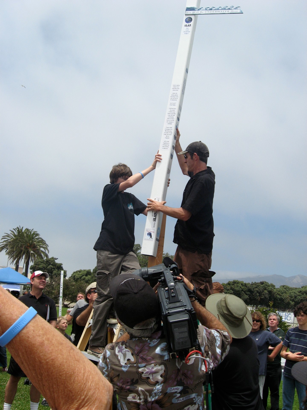 The organization installed 9 SLAP poles along the beach in Ventura, CA.

On April 14, 2009 the first SLAP Pole was installed in the American Museum of Natural History in New York City. During the"The Threat to Life And A New Energy Future" exhibit, A film featuring the SLAP Project was on rotation in the museums children section, or "Discovery Room". Kids Vs. Global Warming founder Alec Loorz visited the museum in 2009 to deliver the SLAP Pole as well as give a presentation about his cause. 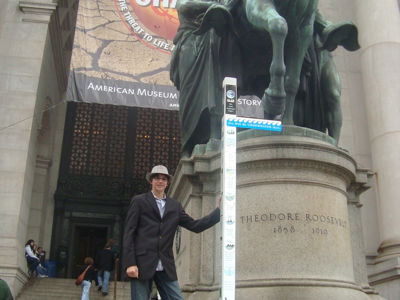 Alec Loorz stands in front a SLAP pole in a climate change exhibit at the American Museum of Natural History in New York City.