Rosemary (Rosmarinus officinalis) is a perennial herb. It is a leafy, evergreen shrub with woody stalks. Originating along the Mediterranean coast, it grows wild along the coastal areas. If grown in its traditional climate with plenty of warmth, it grows as an evergreen semi-shrub. In colder climates, it grows less like a bush and is spindlier and shorter.

Rosemary was once known as "rosmarine". Ros comes from the word "dew" and marinus refers to the sea, belonging to the sea.[1] Thus, put together, the word means "dew of the sea". It was beloved by the Ancient Greeks, the Romans and by many generations to follow, for its culinary, aromatic and medicinal properties.[1]

Rosemary has the connotation of being associated with remembrance. As such, it has often been included in memorial bouquets, wreaths and boutonnieres, such as for funerals, veteran's memorial services and family reunions. In Hamlet, Ophelia stated: "There's rosemary for you, that's for remembrance. Pray you, love, remember." In times past, a sprig of rosemary was an essential inclusion in the bridal bouquet. Churches used to burn it as incense and hospitals burned it to purify the air.[1]

Rosemary is considered to be one of the essential culinary herbs. Its popularity waxes and wanes depending on current cooking trends but for those with a love of strong herb flavours, it's always fashionable and it is often found atop pizzas and in Italian cooking.

Rosemary grows as an upright shrub. It can grow to a height of about 2 metres or 6 feet tall. It can also grow as a creeper style plant, trailing across the ground, depending on the type of rosemary. The trailing rosemary is great for ground cover and for embankments.

The leaves are long and spindly, needle-like. They are usually an olive to dark green colour on the upper side, with whitish or silvery grey colouring beneath. The leaves are thick, strong and tough. They are aromatic, with the scent from the aromatic oils easily released by brushing against a rosemary bush or gently rubbing leaves in your fingers. Soap and perfume makers have long made good use of this wonderful scent.

Rosemary has flowers. The flowers are dainty and of a purple to blue colour, ranging from pale to quite bright. Sometimes it has blue-white flowers. The flowers grow in clusters across the bush and usually appear in early summer. These flowers are beloved by bees. In fact, the flowers can be a good source of nectar for bees during late winter and early spring, in temperate climate zones. 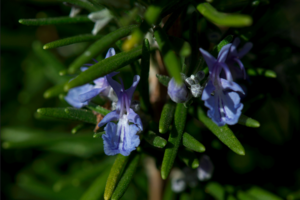 Rosemary plants tend to have a lifespan of around ten or more years, if the conditions are ideal.

Varieties of rosemary include:[2]

Grow rosemary in warm and dry conditions as much as possible. While rosemary can tolerate temperature dips during winter, it may need to be sheltered or protected against wind and the cold. It should not be exposed to frost and will require a cover or some form of protection in such situations. Do not plant rosemary out in the garden until you are certain that night frosts have ended.

Keep the rosemary bush well pruned. If it's used frequently in cooking, plentiful cuttings throughout the year should help to maintain the plant's appearance. Otherwise, you'll need to cut it yearly after flowering. If the bush is not cut, it will turn spindly and scraggly rather than maintaining a stocky and neat bush appearance.

Rosemary is not frost tolerant, at least not heavy frosts. It will only grow as an annual if grown in a frost-prone area.

Rosemary can be grown in a container or balcony box but it must not be allowed to dry out or it will die quickly. Ensure that it has sufficient water but don't water log it either. Also ensure that it is not subjected to heavy frosts.

Upright rosemary will not grow as well in cooler climates; it will likely be a shorter version than those grown in a warmer climate.

Creeping rosemary will cover a large area, so ensure that you can spare the space where it is planted.

Harvest the rosemary leaves during summer. Leaves may be harvested at other times of year where appropriate.

Use fresh rosemary leaves as a culinary herb. However, you may wish take care to only use small amounts, as it has a strong flavour that goes a long way. Choose the younger, more tender leaves for dishes in which it is to be eaten along with the rest of the dish ingredients. Hardier rosemary can be used to flavour during cooking, then removed if wished. Nevertheless, some prefer a strong amount of rosemary––it depends on your palate and the style of dishes you're making. Rosemary is often added to breads and pizza toppings. The cooking styles that most use rosemary are Italian, French, Spanish and English. Whenever using fresh rosemary leaves, chop finely to avoid introducing too much of a leathery texture.

Rosemary can be made into a tea to ease headaches.[2] A hair rinse made from rosemary tea can be used to slightly darken hair and add shine or the tea can be added as a refresher to bathwater.

Add rosemary sprigs to vinegar or oil for flavour infusions. Herb-flavoured oils should be kept refrigerated and used within a month of making, to avoid the potential for bacterial growth. Wash and dry the rosemary well before adding.

Dried rosemary leaves are used as a culinary addition, as a potpourri/sachet ingredient, as a moth repellent when added to sachets and as a scented item for craft or cookery projects. Dried rosemary leaves will last for years, retaining their aromatic oils and flavour.[1]

Upright rosemary bushes can be grown together to form a hedge. This can be a nice way to surround a small herb garden. It is a good edging plant as well. It thrives in sunny positions, so make the most of it in full sun.

Grow near clotheslines. When sheets and other long items of bedroom or kitchen linen brush against rosemary, the wonderful scent is left on the clothing, leaving it smelling fresher.

Hungary water is made using rosemary sprigs.[1] Rosemary is used in other perfumes as well and can be used in eau de toilettes and other lightly perfumed body sprays.

Rosemary is an abortifacient in high quantities.[verification needed] It should be consumed with great care when pregnant.

Page data
Retrieved from "https://www.appropedia.org/w/index.php?title=Rosemary&oldid=683201"
Cookies help us deliver our services. By using our services, you agree to our use of cookies.
Category:
Maintenance categories:
About Appropedia · Policies · Contact · Content is available under CC-BY-SA-4.0 unless otherwise noted.