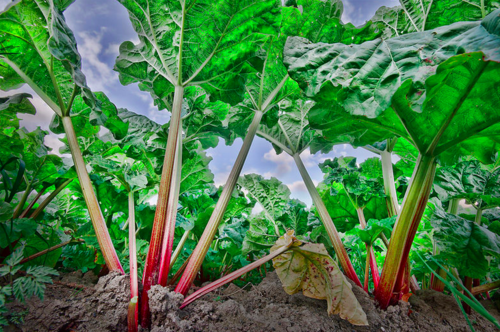 Rhubarb (Rheum × hybridum) is a herbaceous perennial.[1][2] It is of the Polygonaceae family.[2]

Rhubarb is one of the few perennial vegetables. While it is a vegetable, rhubarb is treated as a fruit for most culinary purposes.

Rhubarb grows from thick, short rhizomes[1] and has large, strong crinkly leaves. The leaves grow at the end of red stalks.

The rhubarb produces small flowers which are grouped together.

Choose an open and sunny site for growing rhubarb. While rhubarb can tolerate partial shade, it produces the best yields in full sun.[2] However, the stems are often longer when grown in semi-shade.

Choose whether to grow it from seed, seedlings or by splitting off. Seeds are hard to establish. Division is easier––split off new crowns or sets from the rootstocks.

The soil should be have good drainage.

If sowing seed, do so in the springtime, keeping them under cover at first. Plant out when large enough.

If planting crowns, plant in winter, during the plant's dormancy.

The bud should sit just above the surface of the soil.

Once established, the rhubarb prefers to remain where it is; shifting it can result in poor growth or dying off. The clumps can remain productive for years if left undisturbed, carefully mulched (don't touch the crown) and given well-rotted manure or compost each season. It is also best to grow rhubarb away from other vegetables and plants, giving it its own bedding space.

Maturing time for the stalks takes up to 24 weeks after planting.

Water regularly and feed generously. A nitrogen-heavy fertiliser or liquid feeds every few weeks during the prime growing season will assist the growth of the stems.

Remove stalks which have flowered during the summer.

Clean the plant up in autumn. Remove dead leaves and old stalks. Place mulch around the plants and add either well-rotted compost or well-rotted manure to the soil. Do not cover the crowns though.

Well established rhubarb needs very little attention. However, each winter, loosen the soil around the rhubarb and feed in the well-rotted manure or compost and some mixed fertiliser, in readiness for the following spring.

Pests that can be a problem for rhubarb include snails, slugs and aphids.

Rhubarb may be affected by such diseases as crown rot or honey fungus.

Rhubarb is generally not suitable for container growing.

The stalks can be harvested from early spring. Rhubarb stalks should be broken off, not cut. Pull with a downward and sideways motion, always taking the outer stems first. Leave the youngest stalks in the centre alone; this encourages new growth.

The stems do not always turn red; green stems can be eaten too, just not the leaves. 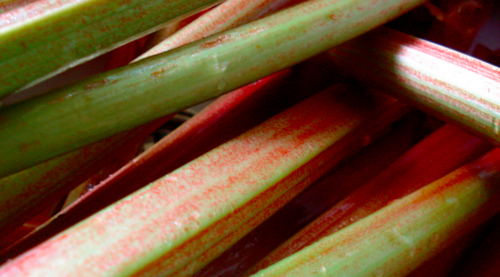 Expect the stems to continue through spring and into summer. Flowering stalks can be removed and more fertiliser added, to encourage additional stalk growth.

Rhubarb stalks are often stewed and eaten with custard. The stems are also good added to baked products such as cake and puddings. Rhubarb is an excellent accompaniment with strawberries.[2]

Rhubarb is best used the day it is picked. Keep it in the crisper in the refrigerator if not using the same day, for up to a week.

See the Caution below regarding leaves, which should never be used for culinary purposes.

Containing anthraquinones, rhubarb stems have both cathartic and laxative properties, and is useful for treating constipation.[1]

Rhubarb leaves can be turned into a pest control spray. [Recipe to come]

Do not eat the leaves of rhubarb. The leaves are poisonous.