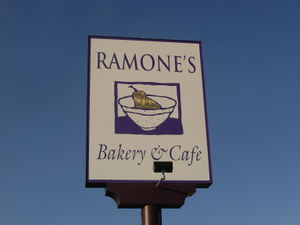 This page is an analysis of an energy audit and lighting retrofit performed by the Redwood Coast Energy Authority (RCEA) on Ramone's Bakery.

Ramone's Bakery was established in 1981, and is still owned by its original owner Berit Meyer. Ramone's was originally located in Old Town Eureka, and since then has expanded to five locations.

What Was Done?[edit | edit source]

The purpose of this page is to examine the actual savings of kWh, CO2 emissions, and money after the the retrofit on Ramone's Bakery was completed. On July 10, 2007, the retrofit was completed. The Redwood Coast Energy Authority replaced the fluorecent light bulbs with better, more efficient ones. It is not known exactly which type of bulb was used. They also replaced older fluorescent with Compact fluorescent, which were more energy efficient. The retrofit was done to Ramone's main store and only consisted of replacing lighting fixtures.

Figure 4: Ramone's Bakery Energy Consumption Sept. 06- Sept. 09 (The kWh are unknown in the months July and August in Year one)

Berit Meyer,[1] Ramone's owner felt that she was more comfortable leaving the lights on for longer periods of time. When one of the old fluorescent lights would go out in the back of the building (not seen by customers), they used to just leave it until most of the lights would go out and then replace all at the same time to save effort. Berit assumed that because of the change in habits her energy consumption may have been the same as before the retrofit because of the reasons stated above.

Meyer's main reason for doing the retrofit was simply because a friend of hers worked for RCEA and suggested getting it done. She complied, and is now very happy she did so. Berit would most likely have not done the retrofit if it were not for RCEA because there would have been no innitiative to do so.

Berit said she would like to do more retrofits to her other buildings throughout Humboldt. Ramone's is extending their services by utilizing the building next door to their main building in the near future, and she said that with the new building will come more energy efficient lighting like what was done in the main building.

Meyer was very satisfied with the retrofit. She stated " I didn't even see the electrician. He came in after hours and did all the work without being seen"

The only problem she was concerned with was after the retrofit was completed, the radio service in the building was diminished. They can't receive certain radio stations now. It is not clear if this came from RCEA's work or not, but they happened around the same time.

The outcome of the retrofit was overall savings. Before the retrofit the average monthly kWh usage was 8,451 kWh, and after the average was 7,917 kWh. This amounts to 535 kWh saved per month, and 6,420 kWh yearly. That amount of energy translates into 3,364lbs of CO2 saved per year. This information was obtained by comparing two consecutive years, one year before the audit, and one year after. The results are shown in Table 1.1

Page data
Retrieved from "https://www.appropedia.org/w/index.php?title=RCEA_energy_audit_reviews/Ramone%27s_Bakery&oldid=647801"
Cookies help us deliver our services. By using our services, you agree to our use of cookies.
Categories:
About Appropedia · Policies · Contact · Content is available under CC-BY-SA-4.0 unless otherwise noted.