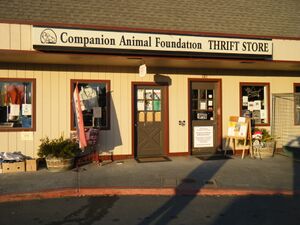 "Companion Animal Foundation's goal is to raise the status of animals by decreasing the pet overpopulation through spay/neuter assistance, education and adoptions. We strive to provide meaningful programs for both youths and adults which increase awareness of the unique relationship we share with our animal friends. Lastly, we seek to work cooperatively with all animal rescue groups as well as the community to find good homes for adoptable animals." The Companion Animal Foundation(CAF)

The Companion Animal Foundation is a non-profit organization. In order to implement care for animals, appropriate funding is needed. Therefore, the Companion Animal Foundation takes advantage of any opportunity to save money or raise funding. The Redwood Coast Energy Authority brought about an opportunity to the foundation's attention that might not only save the company money through energy efficiency, but raise sales as well. 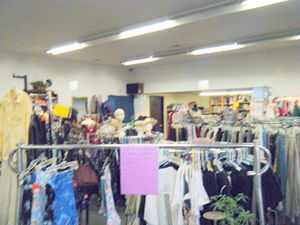 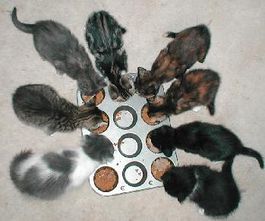 A total of 24  light fixtures line the ceilings of the Companion Animal Foundation. Each fixture holds two fluorescent bulbs. All 24 of these fixtures throughout the building were replaced (Figure 4) during the retrofit. Also, two new 32 watt Sylvania Octron Eco florescent bulbs (Figure 5) were installed into each fixture. A total of 48 bulbs were replaced. A layout of the current lighting set up is displayed in a diagram (Figure 6) of the Companion Animal Foundation's interior.

The Companion Animal Foundation decided to undergo retrofits for a few different reasons. The company wanted to upgrade the quality of lighting throughout the building. Also, as a community serving organization, lowering the carbon dioxide emissions of the building was an additional benifit. In fact, when asked why the Companion Animal Foundation had the retrofits done, Marty Massey (store manager) replied, "To make the store brighter and more green".

The Companion Animal Foundation strives to conserve energy whenever possible. Besides a normal heating system, a few desk lamps, and other minor appliances, keeping the building lit during hours of operation is the only use of energy. The hours of operation for the Companion Animal Foundation have not changed over the last few years. Therefore, their energy consumption habits have remained relatively constant. This consistency can be viewed by a graph (Figure 7) of the first seven months of energy use in two separate years (2008/2009). One may observe that although the changes from month to month stay relatively uniform, a decrease in energy use is apparent between the two lines. This relationship is a reflection of the savings displayed in Table 2.

Although the estimates that the Redwood Coast Energy Authority had made for reductions in spending, energy use, and carbon dioxide emissions are not currently being met each month (Table 3), Marty said that the Companion Animal Foundation was "Extremely satisfied with their experience with RCEA". She feels that each of the company's reasons for getting involved with the retrofit was addressed. She went on to mention that "We would be happy to do more with the RCEA in the future if more retrofitting was ever needed. Dollars, air, and cats were saved".

Page data
Retrieved from "https://www.appropedia.org/w/index.php?title=RCEA_energy_audit_reviews/Companion_Animal_Foundation&oldid=647726"
Cookies help us deliver our services. By using our services, you agree to our use of cookies.
Categories:
Maintenance categories:
About Appropedia · Policies · Contact · Content is available under CC-BY-SA-4.0 unless otherwise noted.