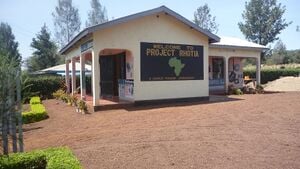 Project Rhotia Provides the resources to further the education of students in the village of Rhotia, Tanzania; by establishing a computer class to teach computer skills, to expand their knowledge of the world through the Internet, and to build a relationship with a sponsor.

The community of Rhotia has a population of about 20,000 people and is located in the Karatu District of Tanzania, approximately 140 km (87 miles) North West from the city of Arusha. Most of the people are farmers, and the village consists of a large number of farms spread over the countryside, a few shops, eleven primary schools and three secondary schools. Students start primary school, which is free, at an age of seven and go for seven years. About 30% of the students are forced to drop out after primary school, because their parents cannot afford the secondary school fees.