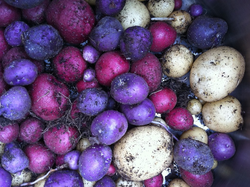 Baked, boiled, broiled, French fried, mashed, roasted and twice-baked––different varieties of potatoes will respond differently to these cooking methods, with some better suited than others. The potato is a starchy, tuberous crop from the perennial Solanum tuberosum of the Solanaceae family (also known as the nightshades)

Potatoes originated in the Andes of South America, where they were grown many varieties to a garden, maintaining their diversity and strength. Since European discovery, after much distrust of the potato, they soon began to be grown as a monoculture in such places as Ireland (resulting in the Potato Famine in the mid 1800s) and throughout much of Europe. Today in most countries where potatoes are grown, they continue to be treated as a monoculture crop. As such, both the diversity of the potato crop has been drastically affected, along with the need for increased use of pesticides to ensure the health of each potato crop. In more recent times, potatoes have been genetically modified to build in resistance to soil bacteria or commercial sprays and for commercial cooking preferences. Preservation of potato diversity remains of the utmost importance in a time of massive monoculture approaches to potato growing, to ensure strong genetic stock should monoculture varieties suddenly fail.

There are thousands of varieties of potatoes around the world[1] but most consumers are only familiar with a few varieties that reach the grocery stores. Here are some of the varieties and their uses:

For the cook, it's important to know the difference between waxy and floury:[2]

Use waxy potatoes for salads, stews, roasting and boiling––they keep their shape well. However, don't use them for mashed potatoes as they don't mash well.

When selecting potatoes to take home, look for:

Potatoes are best stored at room temperature. They need to be kept in the dark. Either store in a potato box or basket or keep in a paper bag. Never store in a plastic bag.

Potatoes should be scrubbed well to remove any dirt. Even if they have been washed prior to purchase, still clean them again. Cut off any eyes before using, as well as any small green parts (cut out completely). A potato that is greenish all over should not be consumed; in fact, some chefs and food experts advise not eating potatoes with any green on them.

Try to keep the skin on potatoes––most of its nutrition is just under the potato skin.

There are lots of ways to prepare potatoes, some more complicated than others. Typical methods include baked, roasted, boiled, streamed, diced and fried, shredded and fried, chips or wedges, mashed, croquettes (and other similar variants), hasselback, barbecued, and more. Cooked potatoes can also be turned in potato salad varieties, of which there are many.

Potatoes in the past[edit | edit source]

Page data
Retrieved from "https://www.appropedia.org/w/index.php?title=Potato&oldid=625238"
Cookies help us deliver our services. By using our services, you agree to our use of cookies.
Categories:
Maintenance categories:
About Appropedia · Policies · Contact · Content is available under CC-BY-SA-4.0 unless otherwise noted.