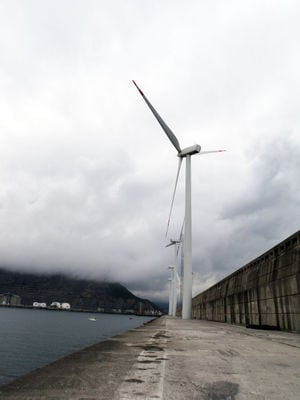 The Country of Spain has taken a leading role in the development and implementation of wind energy. On a windy day about 50-percent of the country's electrical demand can be met with the extensive network of wind turbines throughout Spain. Spain's 4th largest city, Bilbao, is near the Atlantic Ocean on the Northern Coast in what is known as the Basque Country. Bilbao historically has been a key port for various cargo including petroleum from the Middle East.

On February 15th, 2006 a company called Acciona http://www.acciona.com/ which currently operates in 32 countries and employs over 32,000 workers and is a leader in renewable energy opened a wind park at the edge of the Port of Bilbao. The five turbine system is what is termed as a 'near shore' wind farm since it is not out in the ocean but actually attached to a concrete platform that helps protect the dock from ocean waves. The structure is called the Punto Lucero Dam.

According to an article in El Correo the cost of the wind farm in 2006 was 11 million Euro. This comes to about $13,090,00.00 U.S. Dollars (2006 at 1.19 conversion rate). Adding in additional costs for interest, insurance, leasing of land, and maintenance creates a total cost of approximately 15 million Euro. This is roughly 3 million Euro per turbine.

Local power suppliers pay .07568 Euros per kWh for the energy delivered from the turbines.
With average performance (see below) from the wind farm there is a total of 1,349,000 Euros of electricity sold each year.
Payback with this average is 11.11 years and with a life expectancy of 30+ years this project will be profitable despite not operating at optimal performance.

As a general rule wind turbines can be developed offshore at an increase of about 80% greater capital expenditure but they will, on average, return about a 20% higher energy generation rate per year.

On-Site Observation
On June 15th, 2011 a renewable energy class from USAC´s program in the University of the Basque Country in Bilbao/Leioa/Getxo was able to observe the wind farm at the site. With a moderate wind a calulation on one of the turbines was made. The turbine turned at 10 rotations per minute (rpm). Using this data the following calculations were made:
Anglular Velocity v= 10rpm x (2pie/6) = 1/3 pie or about 1.06 radians/second
Tip Speed u = (1/3 pie) 43.5 meters=45.5 meters per second

As with any type of process that generates electricity there are both benefits and detriments to the environment and wind power is no exception.
Benefits
From the report in El Correo, "it is estimated that this facility will eliminate the emissions of a coal power plant to generate the same energy, causing 213 tons per year of SO2, which causes acid rain, 89 tonnes of CO2, a greenhouse gas, and 1,560 tons of ash, also a pollutant.
The Port of Bilbao Park joins four other wind farms in the Basque Region, named Oiz, Badai, Elgea and its extension, Urkilla. These five generate 400 million kW of power, or about enough for 400,000 people and they prevent the emission of over 350 million tons of CO2 into the atmosphere.

The Port of Bilbao WInd Park does have a visual impact as it can be scene from much of the areas on the coast of Getxo and Santurtzi. The turbines are far enough away that they do not overwhelm the viewer.
Noise pollution from the wind farm is very limited by the fact that it is quite far from the nearest residential areas and is contained in an industrial/petroleum port.