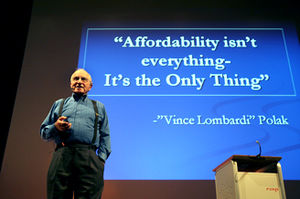 Paul Polak is the founder of the Colorado-based non-profit International Development Enterprises (IDE) which is dedicated to developing practical solutions that harness the power of markets and attack poverty at its roots. Polak’s newest project is D-Rev, a non-profit that seeks “to create a design revolution by enlisting the best designers in the world to develop products and ideas that will benefit the 90% of the people on earth who are poor, in order to help them earn their way out of poverty.”[1]

Polak was born in the Czech Republic and raised in Canada. As a twelve year old in Canada, Polak learned that he could make five cents a quart picking strawberries. This sparked his entrepreneurial spirit and he, along with two partners, Morley Leatherdale and Ed Cummins, started a strawberry farm that earned him seven hundred dollars for two summers’ work (equivalent to about seven thousand dollars today).

After earning his M.D. in psychiatry at the University of Western Ontario in London, Canada, Polak worked as an intern at Montreal General Hospital. In 1959, he moved to Denver, Colorado to do his residency at the University of Colorado Medical Center. Polak received his certification from the American Board of Neurology and Psychiatry in 1968.

Work as a Psychiatrist[edit | edit source]

Polak practiced psychiatry for 23 years in Colorado. To better understand the environments influencing his patients, he visited their homes and workplaces. Polak’s career in medicine includes a stint as a deputy coroner and as a medical officer in Melrose, Scotland. In 1971, Polak founded the Southwest Denver Community Mental Health Services Inc., which played a prominent national and international role in advancing both the concept and practical working models of community based care for severely mentally ill clients. He has published more than seventy articles on psychiatric research, psychiatry, and community mental health.

After a trip to Bangladesh, Polak was inspired to use the skills he had honed while working with homeless veterans and mentally ill patients in Denver to help serve the 800 million people living on a dollar a day around the world. Employing the same tactics he pioneered as a psychiatrist, Polak spent time “walking with farmers through their one-acre farms and enjoying a cup of tea with their families, sitting on a stool in front of their thatched-roof mud–and–wattle homes.”

Based on extended conversations with more than three thousand small-acreage farmers in developing countries, Polak devised the simple operating principles of the organization he founded, International Development Enterprises (IDE), which has helped more than 15 million people who survive on less than a dollar a day to move out of poverty.

Polak is President of International Development Enterprises (IDE), an organization he founded in 1981. IDE has pioneered the development and rural mass marketing of affordable technologies through the small enterprise private sector in developing countries. IDE has installed 1.3 million Treadle Pumps on small farms in Bangladesh by activating a local private sector network of 50 manufacturers and several thousand village dealers and well drillers. As a result, small farm families in Bangladesh have increased their net annual income by $130 million per year. IDE has also disseminated affordable small-scale irrigation devices in India, Nepal, Vietnam Cambodia, Sri Lanka, and Zambia. Polak has played a key role in technology design as well as development and implementation of mass dissemination strategies. In 1998, Polak and IDE launched a global initiative which has been taken up by international organizations and governments, and has the objective of putting one million hectares a year owned by smallholders under low cost drip irrigation.

IDE started when three concerned individuals agreed to put up ten thousand dollars each to get it going. Art DeFehr of Palliser Furniture in Canada and Don Hedrick, a businessman from Lancaster, Pennsylvania, joined Polak to initiate IDE’s first project—to build and sell 500 donkey carts to refugee entrepreneurs in Somalia. This led to IDE’s present focus on intensive profitable agriculture on small farms and the use practical business strategies to increase the incomes of dollar-a-day poor people.

In the beginning, Polak worked out of a bedroom in his house as the only staff member. Unpaid and undaunted, Polak won grants from the government of Canada and the United Nations to initiate the donkey cart project. Later, the Canadian government supported the sale of treadle pumps in Bangladesh and other countries, a project that turned into a great success. Through it all, IDE has sold its products at fair market prices and its customers have earned three times their money back in the first year.

IDE has 13 people at its headquarters in Denver and 550 full-time staff who come from the nine countries where they directly implement projects—Bangladesh, India, Nepal, Cambodia, Vietnam, Myanmar, Zambia, Zimbabwe, and Ethiopia. IDE has had an impact on the lives of 3.5 million dollar-a-day small-farm families (17.5 million individuals) since its inception, and is working together with its partners to reach 30 million families by 2020.

IDE achieves results in challenging environments of extreme poverty, poor infrastructure, disease, and war. With 90% of its employees locally employed in these countries, IDE uses an entrepreneurial approach to succeed where traditional development models have failed. IDE listens to what its customers, the rural poor, say about their needs and then develops appropriate, affordable solutions that increase their incomes. These solutions include developing and marketing technologies for water access and control, providing expertise and training, and increasing access to markets.

In 2007, Polak founded D-Rev “to create a design revolution by enlisting the best designers in the world to develop products and ideas that will benefit the 90% of the people on earth who are poor, in order to help them earn their way out of poverty.” D-Rev seeks to do this by inspiring, educating, and connecting all of the people who are involved in the design process, from the inception to the purchase and use of products.

The chief collaborators at D-Rev include: Kurt Kuhlmann, an engineering consultant and entrepreneur who has developed products for the “bottom of the pyramid” with various companies; Cheryl Heller, founder of Heller Communication Design, serves as a brand strategist and product developer for both Fortune 100 and start up companies in various fields; Steve Troy, who has worked in renewable energy/appropriate technology engineering and supply with over 120 countries; Alan Schwartz, who has been instrumental in 14 diverse entrepreneurial ventures; Mohan Uttarwar, co-founder of BioImagene and several other high-tech ventures; Stephanie Fry, the communications coordinator at D-Rev; and Jessie Genther, the administrative coordinator at D-Rev.[2]

Polak has written more than a hundred papers and articles on water, agriculture, design, and development, as well as in the field of mental health. He has been the subject of articles in print media such as National Geographic, Scientific American, Forbes, Harpers, The New York Times, and The Wall Street Journal.

Out of Poverty: What Works When Traditional Methods Fail[edit | edit source]

Published in 2008, Out of Poverty is Polak’s first book. In writing the book, he was responding to the following sentiment—“I hate books about poverty that make you feel guilty, as well as dry, academic ones that put you to sleep. Working to alleviate poverty is a lively, exciting field capable of generating new hope and inspiration, not feelings of gloom and doom. Learning the truth about poverty generates disruptive innovations capable of enriching the lives of rich people even more than those of poor people.”[3]