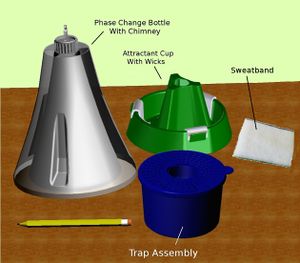 Mosquitoes spread malaria. Personal protection typically involves attempting to keep mosquitoes away from your person or drawing them to a trap where they are killed.

During the day, paraffin wax absorbs solar energy as it melts. At night, the container is brought inside where the heat is released at roughly the same temperature of the human body temperature as the wax solidifies. This heat combined with an attractant derived from human sweat collected from a sweat band worn through the day mimics a sleeping body. Mosquitoes are attracted to the device and are trapped in the "trap".