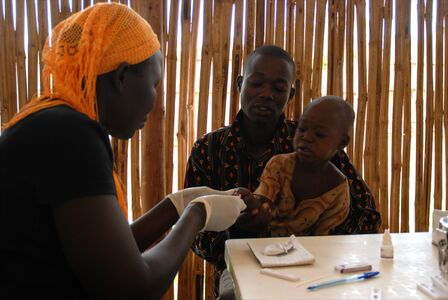 When this device was created (in 2001) microscopic diagnosis was the preferred malaria diagnosis method, but the cost of equipment and the training required were prohibitive. Previous rapid detection devices were too expensive for the developing world. This device was built for developing countries where fast diagnosis and ease of use are essential.

The Paracheck Pf Rapid Test device comes in two forms, a dipstick and a flat-lying device. A drop of blood is collected from a finger prick, the blood flows through a membrane after placement in a buffer, and passes over a colored anti Pf HRP-2 antisera-colloidal gold conjugate. As the test progresses, the conjugate reacts with the HRP-2 and forms a pink line. The pink indicates a positive test, and a lack of bands indicates a negative test.