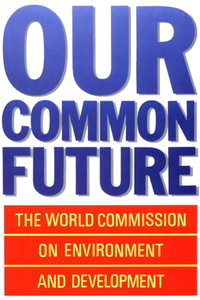 Our Common Future, also known as the Brundtland Report, was the result of a study made by a special commission established by the United Nations General Assembly.The Commission was tasked with studying the outlook for environmental protection towards 2000 and beyond. Our Common Future was the resulting report, published in book form.

The Commission was headed by Gro Harlem Brundtland, hence the alternative name of the report.

The report introduced the concept of "sustainable development". It was first introduced in the second chapter's introductory section, and was defined as development:

which implied meeting the needs of the present without compromising the ability of future generations to meet their own needs.

The report was welcomed by the UN General Assembly and was instrumental in the formation of the United Nations Conference on Environment and Development (UNCED), known for short as the Earth Summit.