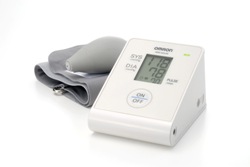 Hypertension (also known as high blood pressure) continues to be a large problem globally. Blood pressure monitoring, however has changed little since it was first developed roughly a century ago. The traditional mercury sphygmomanometer is being phased out of use because of the toxicity of mercury. This has led to more widespread use of oscillometric, semi-automatic devices. Semi-automatic devices, however, still traditionally rely on batteries or an electrical connection in order to operate.

The Omron HEM-Solar fills the gap for an automated blood pressure monitor that can be easily used in rural setting. It does not require the training needed for the manual auscultatory method (using a mercury sphygmomanometer). The Omron HEM-Solar contains a solar panel that recharges the devices batteries allowing it to perform up to 300 readings without needing to be recharged.