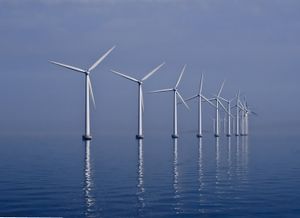 Offshore wind farms use the power of the never-ending ocean breezes to create green, renewable, and efficient electrical energy.[1] While found mostly off the European coasts they have begun to gain in popularity and have started to appear around the world. For example the United States have just begun multiple projects in order to to bring them into the forefront of the energy game. This might come as a surprise considering the amount of wind turbines found onshore. Unfortunately the cost of constructing offshore wind farms has deterred both government and private investment. However, as stated previously, several farms have been built in Europe and a handful have been established in Asia. Their growing popularity has been linked to the successful application as well as benefits they contribute. Some benefits include: the fact that they can not only fulfill energy goals thus reducing our need to use other costly (and environmentally detrimental) methods, they can do this while reducing greenhouse emissions which leads to a slow down of the climate change we are experiencing worldwide.[1]

How It Works[edit | edit source] 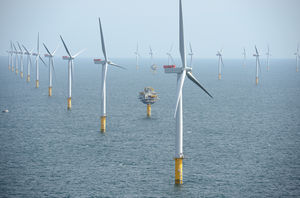 Wind is the key factor that makes these turbines work. The location of the turbines within the ocean is an important factor as it allows for a more consistent strength of wind than could be acquired on land. This wind that passes causes the blades to rotate.[1] Sensors within the turbine move the head of the machine to the area with the most optimum wind velocity. The blades subsequent rotations create power which is then gathered by a generator. This generator then converts the rotations into electricity. From there this electricity is transmitted back to land via subsea cables.[2] Each unit can last up to 20 years.[1] The amount of energy generate depends on a number of factors. This can be the speed of the wind, the size of the unit, etc.[1] Overall these wind turbines stand roughly 246 feet above the sea level.[2] This is said to be able to power approximately 200,000 Chinese homes.

Where they are being used[edit | edit source] 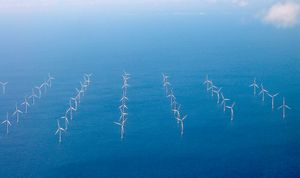 Multiple European countries have begun to adopt the technology. The first was Denmark back in 1991.[3] Since then offshore wind power has been developed in Belgium, Finland, Germany, Ireland, the Netherlands, Norway, Sweden, and the United Kingdom.[1] As time goes on other European countries will continue to develop them. Currently offshore wind farms supply 11.4% of the EU's electricity.[4] Many reasons could be argued as to why Europe has a large amount of wind power as compared to the rest of the world (the United States in particular). One of the reasons could be that even though the costs of offshore wind farms is extremely high the public still supports it.[5]

While relatively new to the game as of 2010 China has a total of 34 turnbines.[1] This is said to power approximately 200,000 households.[6] This shows how quickly and how beneficial wind energy can be when utilized. 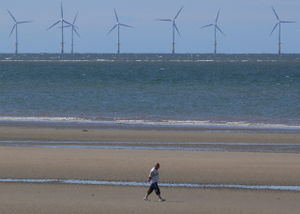 Wind turbines have numerous pros associated with them. They range from the obvious to the lesser known. First we have the increase in green, renewable, local energy. This is a plus in all rings no matter which we look at. If we have energy coming in from the wind turbines, we rely less on other forms of energy. Some of these are less than attractive on the landscape.[1] The less of these we are forced to rely on the more our country is beautified. Aside from this, research has shown that the offshore wind farms can also serve as storm breaks helping lessen the impacts of natural disasters such as hurricanes.[7]

The biggest con is of course the price. Compared to other forms of energy the costs are high. This is including on shore wind farms.[8] This might be one reason that in the United States we have a large amount of on shore farms but no offshore; even though the amount of energy produced is far greater.[1]